How exactly does ethics divergence work?

I know that positive Ethics Divergence means that pops drift away from your empires' core ethics, and negative means they drift towards, that's not a problem. See related question.

What I want to know (that's not answered by the above link) is, what's the math? How often does a pop have a chance to change ethos? Once a year? Once a month? Does positive divergence mean that any ethos moves will be away from the empire ethos, guaranteed (even if it's a conquered pop that already has very different ethos)? Does a more negative value mean that the pop will get more chances to change to your empire's ethos, or does it mean that you will get the same chances to change, but the probability of it working is higher?

Additionally, how do changes between the different tiers work? Does the shape of the ethos wheel matter (other than directly opposing ethos, which obviously matters)? For example, is it easier to go from militarist to Xenophobe or Spiritualist than it is to go to Xenophile or Materialist? 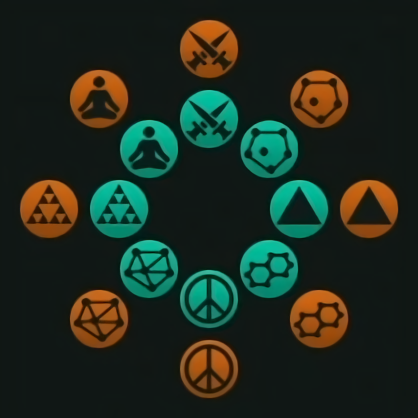 I've read this forum post as well which seems to be a better explanation than anything on the wiki, but there have been some major patches since then and I don't know if it's current. It also seems to suggest that fanatic pops can rotate around the wheel (like Fanatic Militarist can one-step go to Fanatic Xenophobe or Fanatic Spiritualist), which doesn't make a lot of sense to me.

Ethics 'divergence' is pretty straightforward. Each pop has a 2% chance each year to re-evaluate its ethos. When a pop re-evaluates its ethos, it calculates its individual weight towards each ethic. This weighting is based on empire factors (eg, what ethos you are, what treaties you have, what factions you have, etc) and factors unique to its situation (eg is it a synth, on a planet with slaves, etc). You can find a full list of these factors in the wiki. If any ethic's weight is less than 10% of the total weighting for all ethos, it is ignored. The pop then chooses randomly based on this weighting.

Keep in mind, the pop can simply re-pick its existing ethic. You can see the weighting for any given pop by selecting it and mousing over the icon for its ethic. This is the weighting you should go by, not what's on the faction screen.

7
What does the ethics divergence value actually mean?

14
How do planet adjacency effects work?
6
Does negative ethics divergence result in pops adopting my empire's ethics?
9
How much does Assist Research actually help?
7
What does the ethics divergence value actually mean?
7
How does government ethos change work in Stellaris?
4
How do truces work?
8
Does the fire rate for Bulwark of Harmony work if you're in an offensive war?
0
How to get over this one little last bit of acceptance lack to actually use diplomacy for anything?
3
How do sector stockpiles work?