How many Praxis points can I earn in a single playthrough?

I'm interested in maxing out Jensen in a run-through of Deus Ex: Human Revolution by unlocking all of his abilities. As a result, I need to know how many Praxis points it is possible to earn in a single playthrough?

To accomplish this, I assume you would need to do mercy kills on every single enemy possible while still not being detected for Ghost and Smooth Operator, explore every single hidden area for the XP bonuses, and find all of the hidden Praxis kits.

This image showed up on Reddit this morning demonstrating a perfect score: 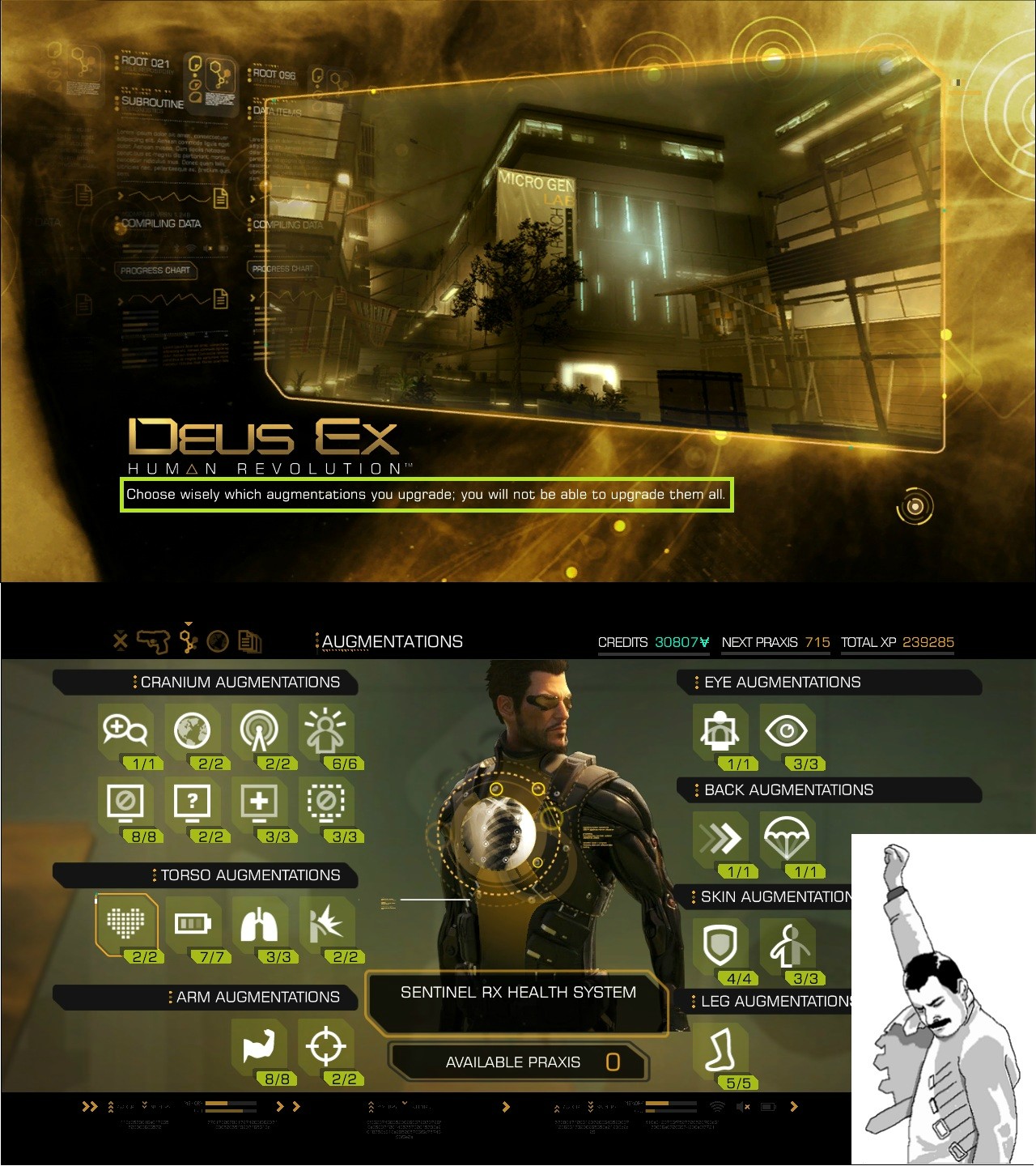 Here are the author's tips:

You have to go for a non-lethal run (pacifist). Try to do a non-lethal takedown on every possible guard. Try to get a multiple takedown on guards having conversations or even patrolling. You can do it if you time it right. Always try to get a ghost bonus/smooth operator wherever possible. If it is difficult to do so in a particular area swarming with guards, bypass all the guards, get the ghost bonus and then come back and takedown all the guards. Hack everything in the game, including alarm panels which can be easily missed. After clearing out an area remember to go back and explore every possible pathway. Get turrets and robots even after deactivating them for extra Xp. This is something a lot of people might miss. Close hacked unlocked safes in the detroit area during your first visit for extra hacking opportunities during your second visit. These are just a few tips I can think of right of the bat.

So, apparently, it is indeed possible to get all 68 Praxis points and max out your augmentations.

Also worth noting that this does include the Tong's Rescue DLC experience, as I confirmed with him, so you will probably need DLC to achieve this.

Here's my research on the matter. 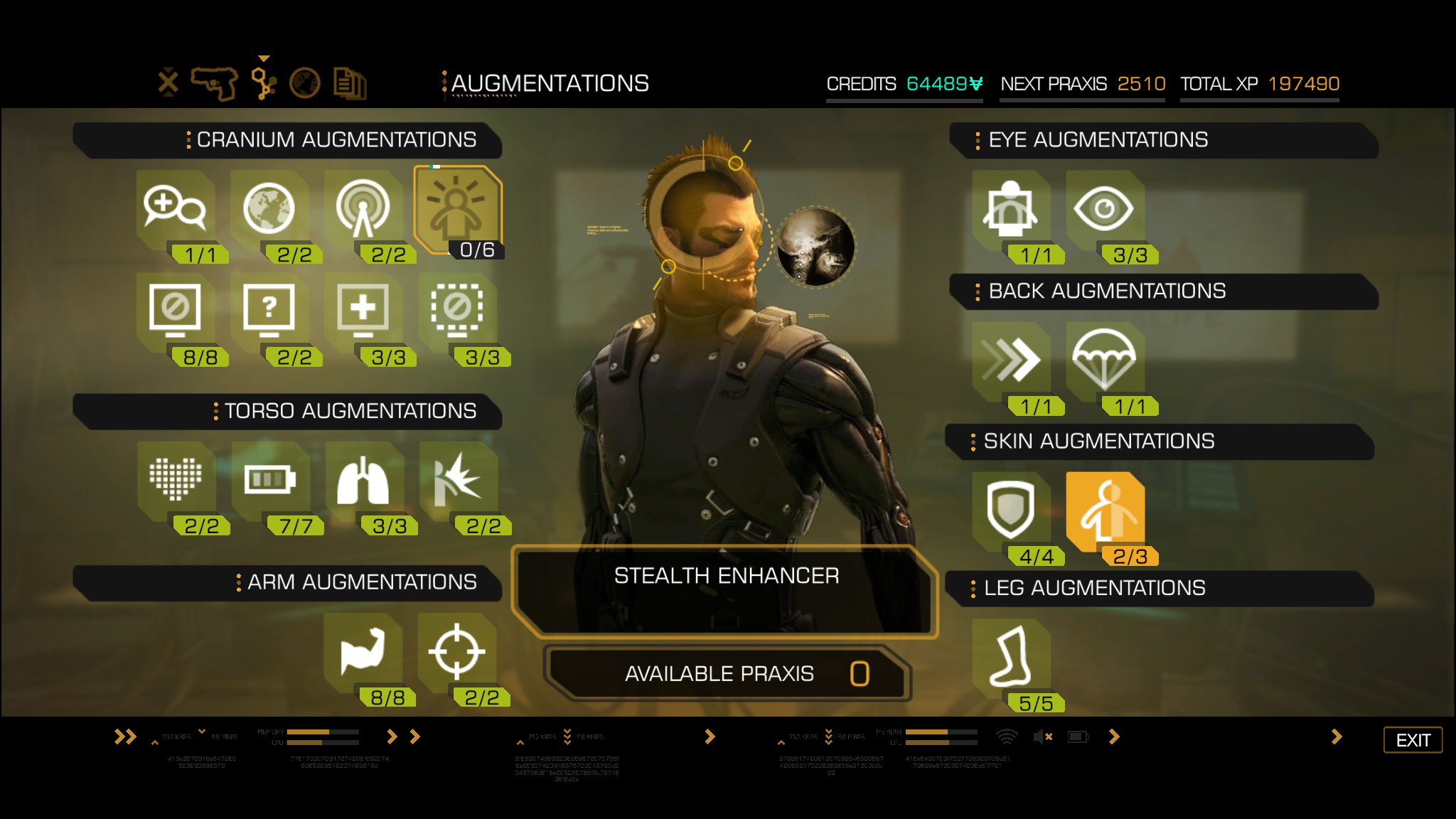 As you can see from the picture above, I finished the game with 197490 XP, 37510 XP away from max Praxis points avaliable.

My run consisted of:

My last play through I counted 286 XP giving enemies, in only the main missions.

Conclusion I would say that it's not plausible to get every single augmentation upgraded. As there are a few robot kills you would NOT get, without discounting some of the Smooth Operator and Ghost bonuses, and there is hardly ~186+ XP giving enemies left, outside of the main-missions.

I discounted the Ghost bonus from the saving Malik mission, as it's more profitable to takedown the enemies and destroying the robot, than the single Ghost bonus (700 XP vs 500 XP)

According to the Deus Ex Wiki, you can get 22 praxis kits, including the LIMB clinics, without considering experience:

The game is new, so there may be more that are undiscovered by Deus Ex Wiki authors.

You can spend up to 68 points before running out of things to spend them on, I think, so you need to get around 230k XP in order to max your character out, assuming you don't miss any Praxis kits on the way. (This was not completely consistent with my playthrough XP count, so either I missed a Praxis kit on the way or you can spend 69 points on augmentations.)

My play style is to try for max XP whenever possible, by hacking all terminals for all datastores, and going for stealth nonlethal takedowns with every guard with nobody ever seeing me or the body. I didn't succeed at Ghost in all the early missions, though, which lost me a decent chunk of XP and probably one Praxis point.

FINAL EDIT: I finished the game with 202,340 XP, and having gotten all Praxis kits that I knew of. I needed seven more Praxis points to completely max out augmentations. I imagine someone could easily (relatively speaking) get every Ghost bonus and knock out every guard in a second playthrough, with the knowledge gained from the first, and probably get one more point.

Don't forget to hack everything for experience (alarm panels are often missed as they're sometimes not obvious) even if you have the password. And try to get every data node, which can grant even more xp as a bonus.

In my last playthrough, I ended up 12 praxis points short, but here's some stuff I missed which may make up for it:

To sum it up, I believe its possible to completely max out all your augs in a perfect playthrough.

Deus Ex Wikia has an exhaustive listing of all XP in the game by area with tips on how to collect it.

Summarizing it is nigh impossible, but a few tips I took away from it for my max XP playthrough are:

It should be noted that going for max XP is a ridiculous waste of time - there are many augmentations that are completely useless (some unconditionally, like Mark & Track, some depending on your play style), you'll be better served by doing 2 enjoyable playthroughs in the same time it would take you to collect enough XP for all skills.

Guys having explored every location I could locate collection all known praxis kits and getting every ghost and merciful soul I could and hacking everything in my path (not easy..) I reached 62 praxis kits which I believe to be the max as even if I could level up past what I was at there is no way I missed enough to reach that as I was EXTREMELY thorough in my searching and going back and forth. (This playthrough took 83 hours)

You cannot max out your person unless you have the DLC packs. I hacked everything and got all hidden praxis kits including the ones from the LIMB clinic. I did non-lethal takedowns to all the non-civilians all the way though and got GHOST and SMOOTH OPERATOR achevements plus I did all the side-quests and found all the ebooks and still was 1 praxis kit short from a fully upgraded person. I checked and double checked every hallway, every office and every breakable wall, etc. and still could not upgrade my person fully.

It was truly hard, and it can only be achieved on "Give Me Deus Ex" difficulty. I commend all who accomplish it, as well as those who came a few Praxis short.

And now for the less honourable route. How many Praxis points that you can earn in a single playthrough is indefinite, if you are willing to ply an exploit.

Gameplay on OnLive, where the grind was done, cannot be hacked nor modded. In the Brag Clip, what is seen is the fruit of hours of accumulating the +500 XP bonus from hacking Adam Jensen's computer + 10 nuke viruses and 10 "stop! worms" rewards from other hackables as a cherry on top. I culminated by loading a save earlier in the game and finally accepting the rewards upon hacking the first possible hackable PC to play through as much of the game as possible at practically maxed praxis (I never bought the extra energy cells).

Here are instructions that I wrote a while ago. While quirky, it stills contains key, scientific data that...other, less comprehensive, yet overly common tutorials lack.

"In the video-game "Deus Ex: Human Revolution" (#DXHR, #DX:HR), there is an exploit/glitch to get lots of hack rewards. By most, it is called "the infinite XP/praxis glitch", but I coin it the "hack reward accumulation glitch" or "#HRAG" for short. Originally, I called it the "hack bonus accumulation glitch" (#HBAG) but changed the name because the game uses the term "reward(s)". In the shortest amount of words, how-to: quick load at reward(s) pop-up. Wordier: Although inexplicit (the OnLive version of the game never tells you), the "F5" and "F8" function keys act as quick-load and quick-save, respectively. It is by means of quick-loading at the menu, that is a pop-up after successfully hacking which displays hack rewards, that at the next successful hack, the hack reward(s) earned from the previous successful hack (quick-loaded from), will be added on. This can be done continuously and across saves, so that (for example as my case) enough XP can be stacked to earn as much praxis as desired to get every ability at the first hackable PC in the game (why PC instead of keypad is explained later). The data of stacked rewards is only stored while the game is active; quitting the game resets all progress. Adam Jensen's PC is the most efficient to earn XP (500), but still takes hours to earn enough to get all abilities. Keypads can stack rewards, but not from one keypad to the next. Stacking, hacking from a PC to a keypad, then back to a PC is OK, but hacking from a PC to a keypad to a keypad will erase all progress. The accumulated rewards don't appear on a keypad's rewards pop-up, but are still stored in the memory buffer. If a PC is hacked after the keypad, the bonuses reappear. I don't remember if stacked rewards can still be obtained by truly completing (confirming the rewards pop-up) a keypad hack, but I assume no or else I would've stacked to the true first hackable (which is a keypad)."

Theoretically it should be possible to acquire all Praxis Points before even completing a single mission but it'll take a very long time! What I guess most people missed in that game is that fact that you take same enemy multiple times, and each time it awards you with small amount of XP. So basically you need to follow these instructions:

Each take down will reward you with only 20 xp, so to unlock all Praxis points you'll need to repeat those actions for something around 11,750 times.

If I remember correctly the whole process will take about 40 seconds each time, which means you'll have to play the game for something around 130-140 hours to be able to do the job!

side note: in the late game I've actually used this method to get a single praxis point, so I'm sure it's possible!

Not the answer you're looking for? Browse other questions tagged deus-ex-human-revolution .

24
In Deus Ex Human Revolution can you keep earned "augs" to start a new game?
14
Which missions can I earn the Ghost and/or Smooth Operator bonus on?
20
How many Praxis points can I expect to get in a playthrough of Deus Ex: Human Revolution?
-1
Is there a way to grind?

20
How many Praxis points can I expect to get in a playthrough of Deus Ex: Human Revolution?
10
What determines whether or not I have hidden a body?
4
How many endings must I see in Deus Ex to earn the "Deus Ex Machina" achievement?
11
How do I earn the Pacifist Achievement?
14
Which missions can I earn the Ghost and/or Smooth Operator bonus on?
17
Is there an optimum guide for spending praxis points?
12
How can I safely walk through Electric water in DX:HR?
4
How can I get that extra Praxis case?
8
Can I use turrets but still get the "Ghost" experience points?
6
How many Deus Ex Human Revolution Missions Have A Time Limit?