Can a Pichu wearing a Santa hat hatch from an egg?

Pikachu's pre-evolution is Pichu, and the most recent update announced a Johto Holiday and the ability for Pichu to hatch from eggs

Professor Willow has discovered Togepi and Pichu hatching from Eggs! Starting later today, Trainers will have the opportunity to hatch these and several other Pokémon that were originally discovered in the Johto Region in Pokémon Gold and Pokémon Silver video games. These are the first of more Pokémon coming to Pokémon GO over the next few months.

Can a Pichu wearing a Santa hat hatch from an egg? 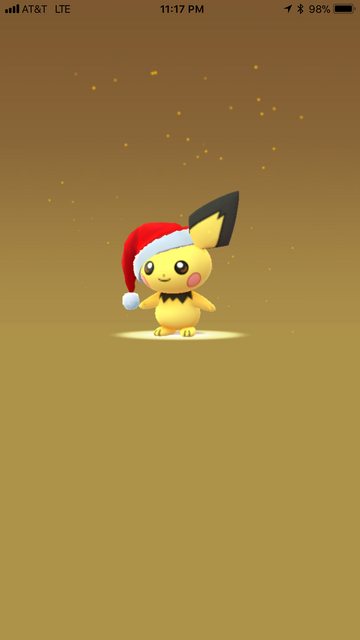 As of this Christmas season, Pichus can be hatched with the Santa hat. See this answer for proof.

Based on the post here, it looks like Pichu are not hatched with hats, since Pichu and other babies went live at the same time as the Santa hat Pikachu.

I've hatched two Pichus and one had 91% perfect IVs so I evolved it. The resulting Pikachu does not have a hat but I've caught a bunch of Pikachus with hats and got the eggs after that was live.

31
Why is Pikachu wearing a Santa hat and what does it mean?
8
Can you actually hatch a Pichu with the Ash hat?

2
Why won't my 2km Egg hatch?
0
Why won't my Egg hatch in Pokemon Go?
31
Why is Pikachu wearing a Santa hat and what does it mean?
8
Can Generation 2 Pokémon (e.g. Pichu) hatch from an egg I got before the update that added them?
10
Will evolving the Pokémon Day 2017 festive Pikachu give me a festive Raichu?
8
Can you actually hatch a Pichu with the Ash hat?