I just started playing Skyrim and I'm, all the time, dropping stuff I can't carry. In other RPGs, I would teleport to town and sell stuff. While I can Fast Travel to town, I have to run all the way back (including traps and enemies).

Is there a way to quickly get back to where I left? I assume I can do it with mods, but I want to stick to vanilla for now.

Managing your inventory and carry weight is one of the primary gameplay mechanics of Skyrim.

One thing Skyrim has done to make this easier compared to previous entries in the series are convenient exits at the end of dungeons. Many dungeons are basically circles, where the last room is actually right next to the entrance. If you're stopping halfway through the dungeon and turning around to take stuff back to town, you're doing it wrong.

Instead, realize that you don't need to, and shouldn't, pick up everything. Many players who are new to this series and similar games make the mistake of picking up everything. Most of it is just junk for atmosphere. Another mistake is paying too much attention to the gross value of an item, while ignoring its weight.

Penny Arcade has even created a comic commenting on this behavior: 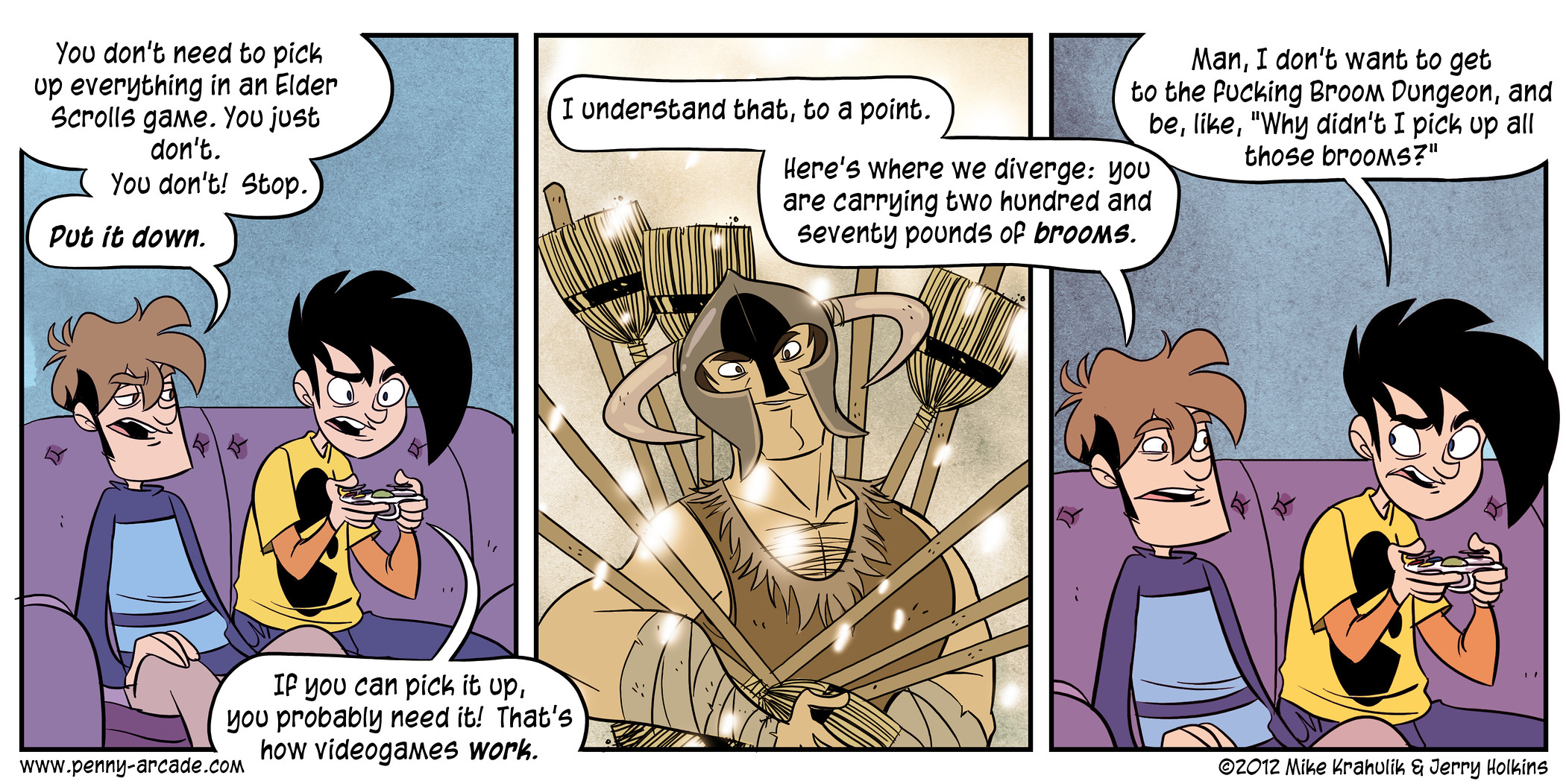 I usually use a rule of thumb of picking up things worth 10 or more gold per pound for most of the game, just because it's easy to calculate and tends to work out. If you happen to get full, drop some heavy stuff and keep going. Once you get to the end of the dungeon, it's usually easy to exit quickly and fast travel back to town.

If you really, really want to grab everything, there are things you can do to improve your carry weight. Also note that you only need to be unencumbered when you initiate fast travel, so a very temporary increase like you might get from a potion is enough to get you from point A to point B.

Your follower has a carry capacity, but can pick up anything if you give them an order to pick it up. Some may consider that to be exploiting a glitch.

Also, you can fast travel while on a horse even when encumbered.

One easy trick to go back to town when you are overloaded : Find a horse, once you're on it you'll be able to teleport wherever you want ;)

If you own a horse, it will be ( most of the time) waiting for you at the end of the dungeon.

Extra: at the end of some mission in the game that I let you discover, you'll get a spell to conjure a horse just like that which make things way easier :)

18
How can I optimize my inventory for weight vs. value in Skyrim?

146
How do I increase the maximum amount of weight my character can carry before they become encumbered?
108
How do I make money efficiently?
0
Dragon help in Skyrim. Can't escape
6
Skyrim "Blood on Ice" Issue
4
Skyrim Battle for Windhelm - Not Starting
0
My Skyrim files have been moved?
1
Markarth Guards seem to be broken and I can't get out of the hold to let the place reset
3
Erik the Slayer is Invisible