What factors affect your influence radius? I'm pretty sure population and system level are part of it, but it seems like there must be something else because I've seen AI empires with absolutely enormous influence areas when I know they were less developed than me.

 Influence: used as a currency for diplomatic negotiations and to expand the frontiers and the influence of your empire.

From what you are describing sound like the AI went heavy on influence despite being less developed than you.

In order to colonize, assimilate, occupy, or own a system, the Unfallen must spread vines from system to system in a connected web which originates from their home system. Reflecting this particular mechanic, the typical colony ship has been replaced with Vineships. Vineships include a module that allows the ship to spend turns spreading vines to the current system from a near-by system that has already been entwined with vines. There's a variety of benefits that the Unfallen, and to a degree their allies, can take advantage of in entwined systems, but the most important one for this particular question is that this spreads the Unfallen's influence into that system.

Each Vineship will take so many turns to spread vines into a system, but this can be sped up to take as little as 1 turn by combining multiple Vineships into a fleet. With enough CP available, this can allow the Unfallen to spread vines to neighboring systems extremely quickly, allowing them to spread their influence into one system per turn per Vineship fleet.

Spreading vines can also be weaponized in a sneaky, yet frightening way. Combined with the Unfallen's default ideology, Pacifism, and the tier 4 empire technology SLC (Supra-Light Content) Systems, this can make the Unfallen pretty powerful and a very real threat of taking over entire civilizations mid to late game without firing a shot. 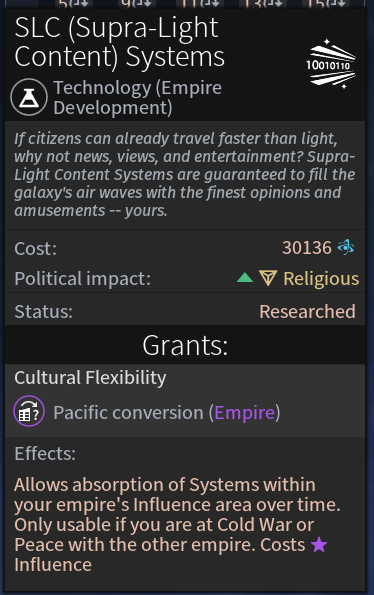 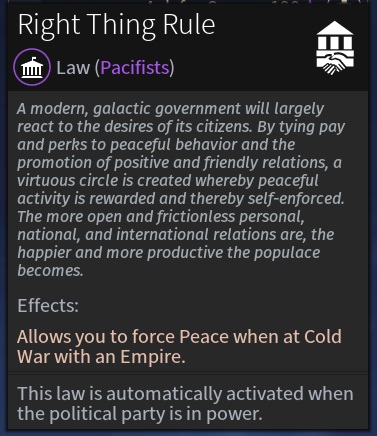 Essentially, by being able to force peace with a nearby empire, and spreading vines/influence into those systems under relatively "safe" conditions, the Unfallen can then spend influence to take control of those entwined systems. Some simple web searches describe Unfallen players taking over entire civilizations in just a few turns in this way. If facing enemy Unfallen empires, be mindful of this. The only real counters to this tactic are really the two diplomatic extremes: go all-in with them and form an alliance which would grant some minor benefits to your entwined systems, or declare war and force them out and destroy the vines. Also keep in mind that since the Unfallen do not have spheres of influence surrounding their systems, their systems are immune to the Pacific Conversion in return, preventing the influence radius of your systems from having any real impact.

Not the answer you're looking for? Browse other questions tagged endless-space-2 or ask your own question.