How to delay a command block [duplicate]

I have created a short command block stack, one block teleports the player and the other plays block.piston.extend. My problem is that it teleports the player before the player can hear the sound. I would like to know if there is a way to delay the command from inside that command block. I have looked at other solutions but they all involve some complex scoreboard timer thing. If you could give me a solution that doesn't use that system or maybe you could explain it better.

This is the command I need to delay:

If anyone could help I would really appreciate it, so thanks in advance!

allright, what other solutions are suggesting is the go-to solution, that also ensures multiplayer compatibility among other things.
and basically what you're doing is adding 1 to the player as soon as the playsound event is triggered. then you count up one to the score of the player, 20 times a second, until whatever amount you wanted to pass is passed, then the second event (the tp in this case) is triggered and the timer is reset.

Allright, now to an alternative solution to your problem:
1. The easiest way would probably be to reverse the order of the two commandblocks and just play the sound at the target location instead. this wouldn't require a delay and should be mostly multiplayer compatible.
2. You can change it to 2 commandlines which each add another command, ordered like this for the sake of easy explaining: 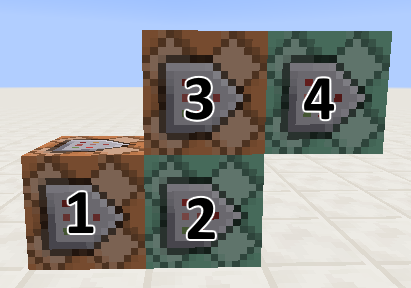 the first commandblock is triggered by whatever you want the commands to run off of, the second command will summon a falling redstone_block above the third commandblock that will take a while to fall down. adjust the height to change the delay. the third comamndblock will remove the redstone_block above itself and run the teleport command.
Be aware that this solution doesn't really support multiplayer and multiple people using it in quick succession can lead to unwanted behaviour

11
How to delay or slowly loop commands?
-6
Delay Command Block

4
MC Command blocks - teams!
5
Is there a way to determine whether a player is online or offline with command blocks?
1
Blocking a plugins command from displaying in chat and console when run from command block
0
Problem with multiple commands in one Command Block
1
Execute and Fill Command Block
0
How do I code a command block so that it checks for if a player is wearing a specific Helmet called “☀ Disco Helm ☀”?
1
Why does execute “as” not work in Command Block