I've recently started playing on an Xbox One, using a Xbox Profile/Gamertag that I previously used on an Xbox 360. In all of the Xbox One interfaces, and on xbox.com, I see the "Gamerpic" avatar that I recently selected:

However, when I'm playing Xbox 360 games that I've downloaded onto my Xbox One, I don't see that picture. Instead, I see the "Gamer Picture" that I previously selected on my Xbox 360:

I'd like to change my Xbox 360 avatar to something new. (It seems like these avatars are drawn from different libraries, so I don't expect to be able to use the same avatar on both platforms.) If possible, I'd also like to change some of the other Xbox 360 profile settings, such as the "Gamer Zone" (which is no longer displayed on-console but is visible in some places in the web interface).

I no longer have an Xbox 360 available. Is there any way to modify these legacy Xbox 360 profile settings from an Xbox One or, failing that, the web interface?

You can edit your Xbox 360 profile on an Xbox One by using any Xbox 360 game. One the game has loaded, press the View/Back and Menu buttons (the ones in the middle of the controller) at the same time to bring up the Xbox 360 "Xbox Guide" menu. 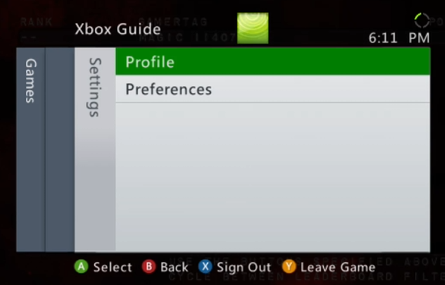 From there, you can scroll over to "Settings" and select "Profile", then "Edit Profile", to see settings that will let you change the "Gamer Picture", "Gamer Zone", "Motto", "Name", "Location", and "Bio" that are used for Xbox 360 content.

Unfortunately, this now seems to mostly be limited to the built-in Pictures/Avatars. I had unlocked and purchased several other ones, but only one of those is visible in this menu. It used to include all of them (when I first wrote this answer in 2017), so this appears to be a bug/regression, but at this point I doubt it will be fixed. 😞 I've tested this through multiple games and routes to access these settings, including from the games in which I unlocked some of the avatars, but it made no difference.

Not the answer you're looking for? Browse other questions tagged xbox-360 xbox-one or ask your own question.

2
Was Dreamfall: The Longest Journey removed from Xbox 360 in UK/EU markets?
7
How do I reformat an Xbox 360 hard drive?
2
Changing Xbox 360 display settings from PAL-50 to PAL-60
5
Activity Feed on Xbox One private?
1
Lost Xbox 360 data
2
"Xbox Support" underneath my gamertag
1
Xbox One Controller Backwards Compatibility PC
2
Transferring data from Xbox 360 to Xbox One WITHOUT XBOX LIVE
4
XBOX One - Microsoft Family Accounts
0
How to free XBox 360 storage on XBox One?