I've played Madden for a long time now and I've always wondered about the different colors when one looks at the pre-snap play art for a zone defense. There are usually blue, yellow, and magenta 'zones' and I was curious if they referred to how the defender covers the zone or of if they're just used to differentiate all the different coverage areas on the field. Thanks!

This thread has an answer that seems to match what I see:

Sometimes there isn't much of a difference at all: mainly, it comes down to responsibility for the flat. Let's look at a couple of Green Bay's defenses in their 3-4 Under package.

Here, the corners are dropping back basically even with the linebackers, far enough back that the flat will be open. 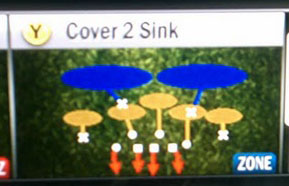 Here, the OLBs are dropping out and back, but in theory could come down to cover a back or TE in the flat if necessary, as they're not quite even with the ILBs. 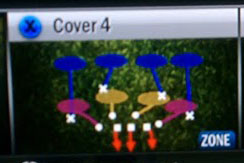 So you'll usually see purple in defenses where there are no other zones closer to the LOS ... but sometimes there are exceptions. See the Packers' Cover 2 in the 3-4 Solid package: it's got the same intermediate coverage as the Cover 4, but instead of dropping four deep, the corners come up and take away the flat, so the OLBs don't have the same responsibilities as they do in Cover 4, even though they have the some color ... it's just that the depth is the same. 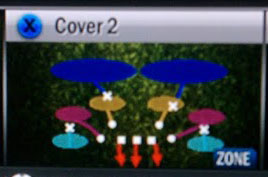 Not the answer you're looking for? Browse other questions tagged madden-11 madden-12 madden-10 or ask your own question.