How can I tell which rom version of a game is loaded on an NES cartridge?

On occasion game studios need to make changes to existing games that are still on the market. This means that for any single game, there could be different versions in the wild with only minor differences. During the original Nintendo NES era, this likely happened as much as it might happen today.

If I have an old NES cartridge, is there a way that I can tell which version of a specific game ROM has been loaded to the cartridge?

Yes, and it's quite easy to identify. On the back of each Nintendo cartridge is a pretty standard caution label. There were a few variations over the years, but the shape and placement has been consistent.

During cartridge production, game studios would have to send off their finalized game roms to the manufacturing plants that would assemble the cartridge chip, flash the roms onto them, assemble them into their plastic casing and apply all of the labels.

This assembly process took place in multiple assembly locations and on the above-mentioned caution label, an impressed stamp was placed on the label to indicate which assembly line the cartridge was assembled on.

When a game had an updated rom sent from the developer to Nintendo, the manufacturing facility would have to know the revision. Initial rom versions have no specifier. However, versions 2 of a game rom and above were marked first with an "A" for the first revision, then a "B" for the second revision, and so on.

If you find an "A" revision then there is a good chance that another revision of the game out there that is version 1. However, for some games that's not always the case. If quality assurance caught a problem before a game was shipped to stores, they could have notified the developers who could have fixed the rom file and then submitted the updated version to Nintendo for production in the manufacturing facility. That is to say, though it is rare, some games may start with revision A.

It's also worth mentioning that game revisioning happened a little more often than one might think. Most of the changes were minor and were often made to fix minor bugs that were found after mass release, or if a game was re-released, the copy right dates may have been updated on the start screen. Some variant collectors do look for these differences but usually needing a specific version for proper gameplay is quite rare.

Nintendo continued using this quality assurance system for marking assembly lines and rom versions on carts for many years. I've seen these versions on Game Boy Advance games and if I recall correctly, they might even exist on DS and even 3DS games today.

Knowing this knowledge can help you spot variations of games, if you want to factor rom versions into your collecting.

Below are a couple of sample images, showing these stamps on a couple of games that I own. 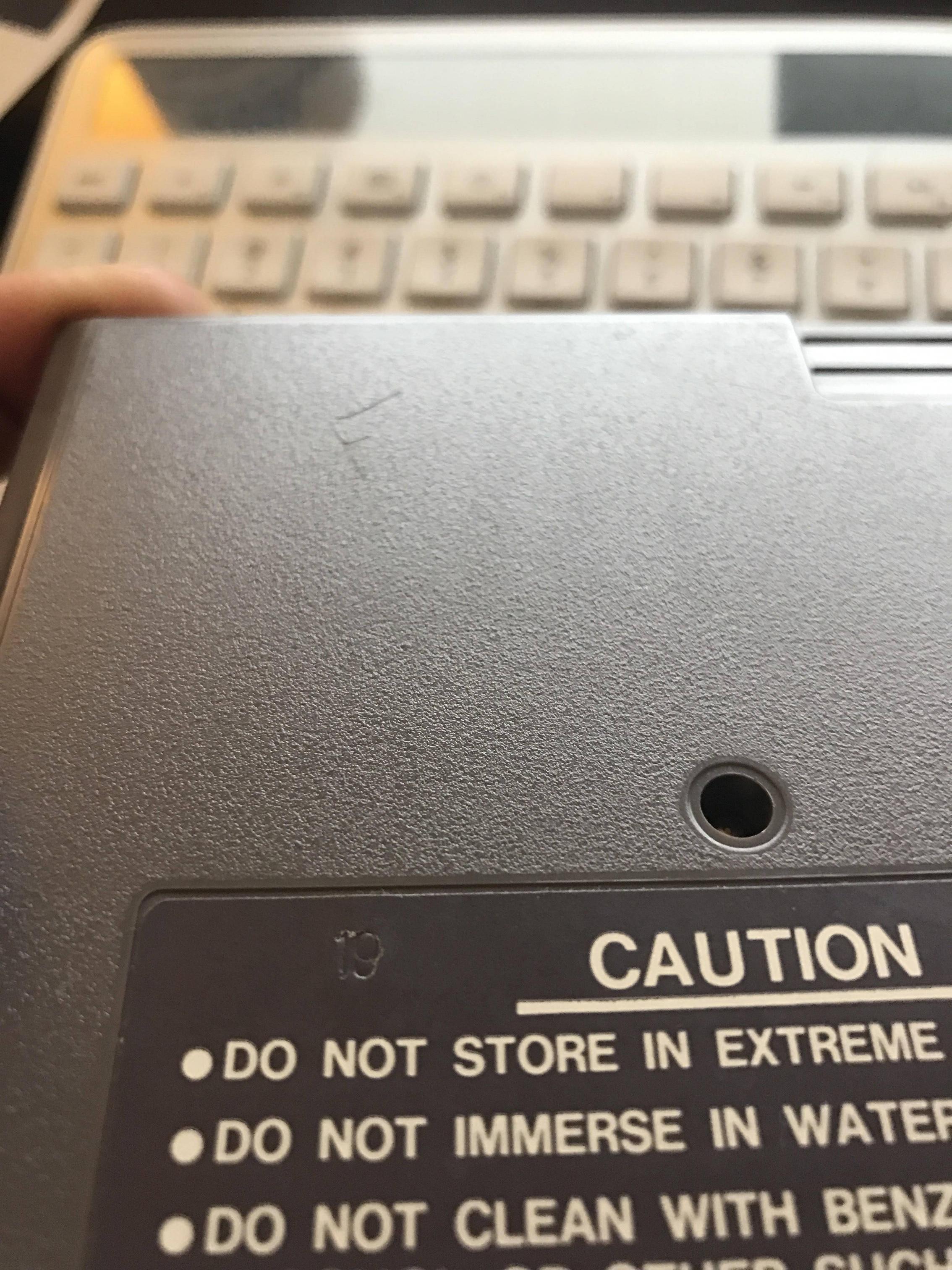 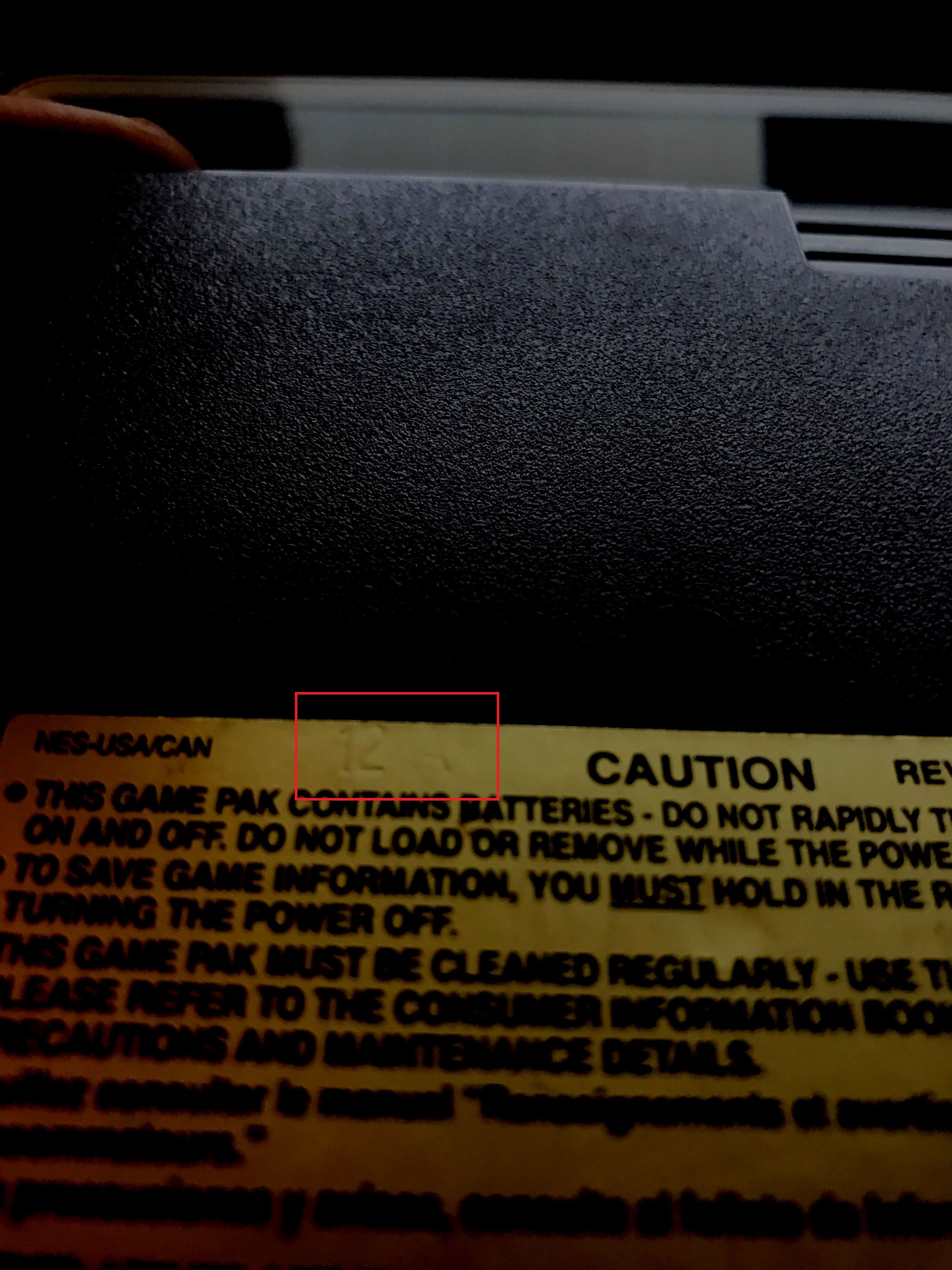 For Nintendo-manufactured games, the combined ROM IDs (made up of the system code + product code + revision number) written on the ROM chips (PRoGram and optionally CHaRacter chips) make up a "combined" ROM version.

Note how only one of the chips needs to be revised for a new "combined" software version/revision.

Contrary to popular belief, markings on the outside of the cart relate to general cartridge revisions, not software revisions, although these sometimes (often?) overlap, so RLH's answer is still useful.

Keep in mind that for games not manufactured by Nintendo or ones that have epoxy blobs over the chips, it may not be so easy to determine the version. If there are no markings relevant to the ROM versions at all, you may have to dump the ROM(s) (and combine to a single file) and checksum it, then compare to external information to identify it.

Not the answer you're looking for? Browse other questions tagged hardware nes or ask your own question.

5
Is there in-game differences between 3 and 5 screws NES games?

11
How can I get an NES controller to work on my PC as a Joystick?
53
How can I check if my computer's powerful enough to run a certain game?
16
How can I replace the NES cartridge battery?
2
How can I get the second Ice Beam in Norfair after getting the first Ice Beam from Brinstar and the Wave Beam from Norfair? (Metroid NES)
9
Illustrated list of differences between the arcade and NES versions of Super Mario Bros
5
Is there in-game differences between 3 and 5 screws NES games?
2
How do I tell Legend of Zelda NES versions apart?
6
In the NES version of Tetris, how much faster is a soft drop?
33
How to find a specific NES pirate, unlicensed or bootleg game information?