Are Chocobos useful for more than travel? 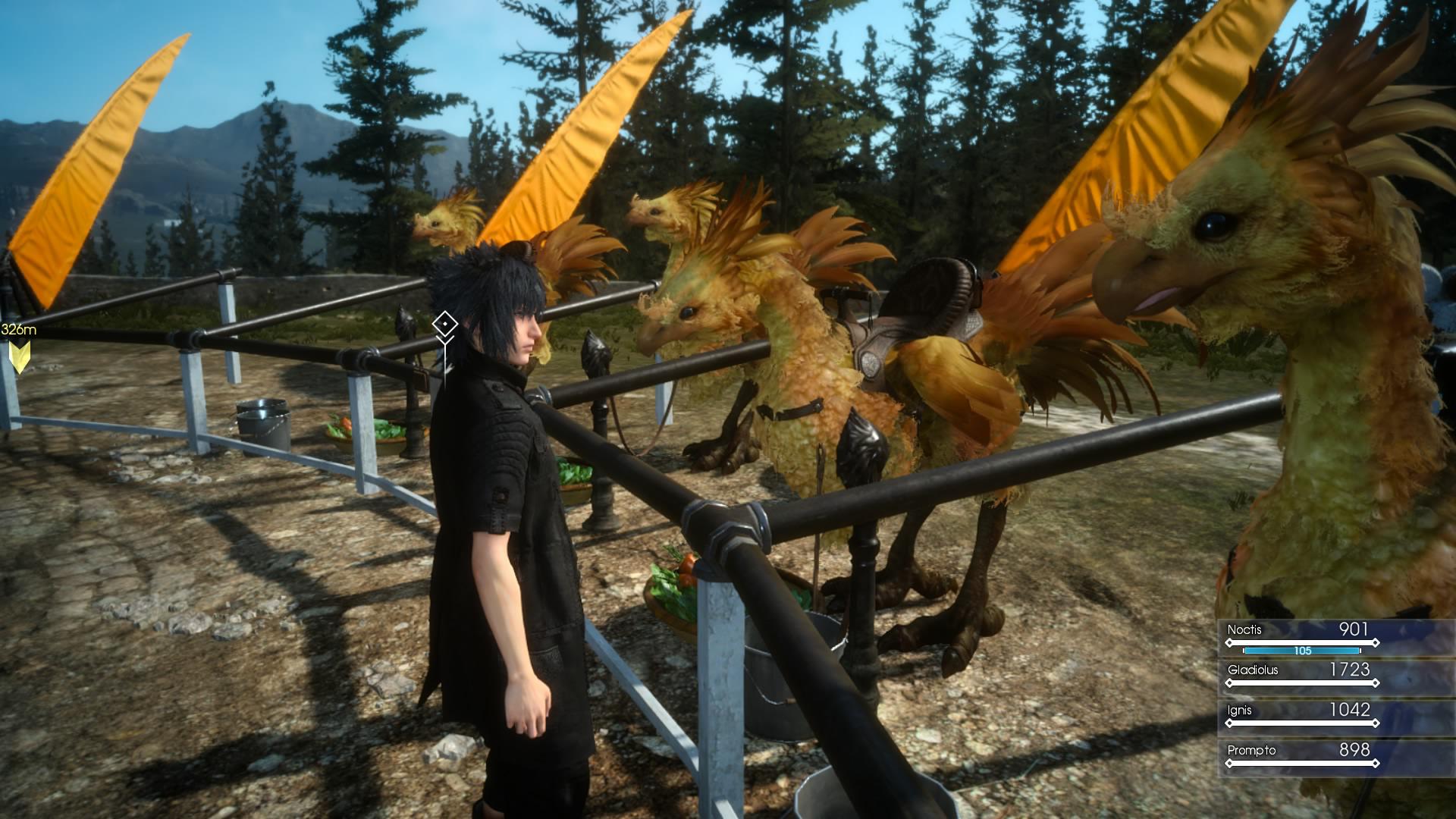 I can ride the famous Chocobos but I've noticed they're slower than the Regalia and faster than walking/running. What is a Chocobo good for and what is the point of doing anything else with them?

To start, you'll need to complete "A Behemoth Undertaking" to unlock the ability to rent Chocobos. This is a Hunter Quest located at Wiz's Chocobo Ranch. It isn't difficult nor is it required, but it does make other aspects of the game easier and unlocks the path to all that is "Kweh."

Completing "Friends of a Feather" side-quest (contracted by Wiz at his ranch) will give Noctis the "Chocobo Whistle." The Chocobo Whistle acts just like the Beast Whistle, except it summons a Chocobo to the player location if they have time remaining on a rental. All players in the party (whether they are temporary or otherwise) will be given a Chocobo to ride.

Chocobos cannot be summoned in:

Chocobo's increase level by simply riding them for a set number minutes. Like the time tracking with the Regalia, time on a Chocobo does no reset once dismount but simply stops until you mount and ride again. However, ride times are in addition to the previous number of minutes as opposed to a total time on the Chocobo.

For example, the player must ride the Chocobo for 24 additional minutes after obtaining Level 8, to reach level 9.

The last, Level 10, is great for those Link-Strike savvy fighters looking to increase AP and EXP by raising the Finesse Grade quickly (every little bit helps, right?), or who just like the idea of mauling enemies with a giant yellow bird you can ride around upon.

In all, to reach Level 10, the player must ride a Chocobo for a total of 138 minutes while in motion and mounted. Additionally, the Chocobo stands to gain roughly 20 scale mph in speed and an additional 40 points in usable stamina. This is very helpful if you're looking to hit the races and get additional rewards, or get to places faster than walking but more distant by roadway.

Given the day / night cycle in Final Fantasy XV is 45 minutes, mathematically speaking the player could rent the Chocobo for 4 days, band the controller, and run in circles for about 2 hours and 20 minutes real-time to grab Level 10 easily (like the same trick for pushing Gladio's skill to Level 10). It's best to do this in an area that you know the party won't be attacked at any point because the Chocobo will buck Noctis when enemies appear and bolt away.

Your Chocobo can wear up to four medals at a time, each earned by competing in races or events at Wiz's Chocobo Ranch. Medals do nothing practical, they just provide eye-candy and facilitate some in-game fun.

Note that feeding a Chocobo foods that grant a Choco-buff do not apply during races or events. Leveling is important should you hope to compete and win because the player will rely on the raw stats of their Chocobo.

Noctis can race and compete in events at any point of the game, which at times may require the use of Umbra.

You may have noticed this listed started at #2. The first medal is the Replica Medal and is a default medal when "A Behemoth Undertaking" is turned in. This isn't an earned medal in the same sense as the other 8 but is a medal all the same.

The last Medal is the Jockey Master Medal and is a prize for winning all other medals.

While, being slower than Regalia, Chocobos can actually be used not only on roads, but on other locations (except ones mentioned by Shawn). So, effectively, Chocobos are your best way to travel to places, which Regalia can't reach (such as quest locations or hunt spots).

Also, on particular segments of game, you can't use Regalia for specific reasons, and using Chocobo is very convenient there.

But, I suppose, it is worth to mention, that while traveling on Chocobo, you are not leveling Gladiolus Survival skill.

Also, Chocobos can swim in lakes. Aside from a handy shortcut through large lakes, there's at least one secret fishing spot (North shore of the Vesperpool) that you can only reach by riding the back of a swimming Chocobo.

1
How can I catch fish consistently?
7
Will nighttime always be dangerous?
2
Is there any penalty for summoning?
7
How to know what type of fish are those?
7
What determines the ability to fast travel?
4
How do I (effectively) backstab bees?
0
I can't summon during the quest 'engaging the empire'
3
What prompts Aranea to join my party?
12
Who are the people who help with “Let Sleeping Mountains Lie”?
3
Is there a way to access the Moogle Chocobo Carnival Content?