I have an Xbox One Elite controller and Windows 10. Everything works except the right stick does not move the camera. I have used the Windows Controller utility to confirm that Windows is receiving the input. 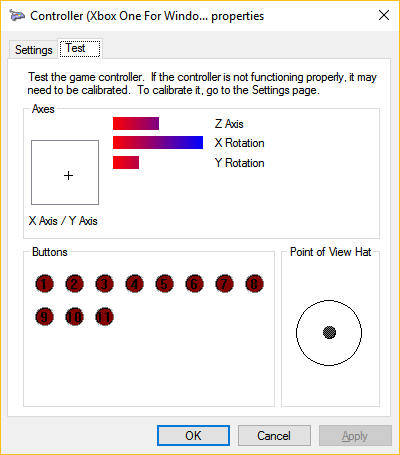 Not sure if it's related, but I've also noticed in Windows 10 that the left stick scrolls regular windows. Maybe Windows is getting in the way?

I've tried in both Big Picture and launching it regularly.

Recently Steam announced Controller Config support, similar to the Steam Controller profiles, for Xbox controllers. When this announcement happened, I started playing around with the settings. I set this: 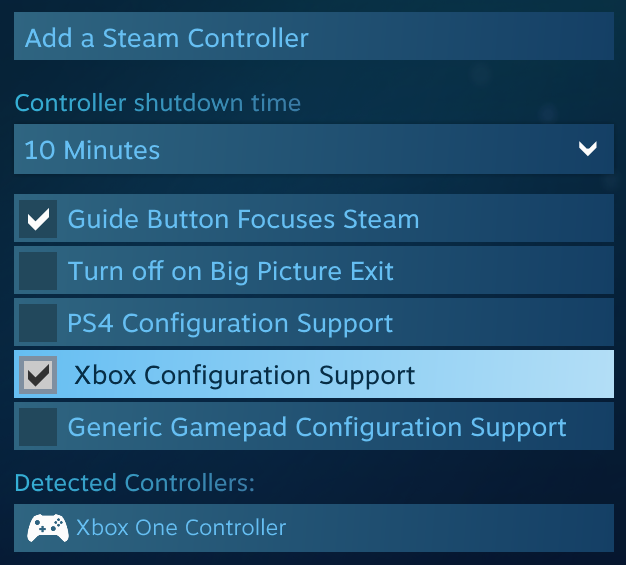 I forgot about it. But that was the problem. I just disabled it and everything is fine again.

To directly answer - Windows is part of the problem but not the entirety of the problem. Steam isn't really addressing the issue on their end, either. The general fix for it is updating the drivers for the controller manually and making sure you correctly choose which controller is present.

I would suggest trying a fresh device install by deleting the drivers, rebooting to save the registry without the device, and then installing the device and drivers from the method below. Windows Registry can be a strange thing sometimes...

The official method to check and update drivers for the XBOX Controllers and Windows 10 is described here as:

On Windows 10, update your controller by using the Xbox Accessories app:

I got mine to work by doing the following:

TL;DR (where and how about the issue)

...a Microsoft representative confirmed that the Xbox engineering team was working on issues with controllers' "exclusive" modes, controller connectivity with certain games, and Steam Big Picture mode seeing two controllers where there should be only one. No timeline was given for fixes on those issues. The Microsoft rep also insisted that two of the new-hardware Xbox One gamepads should be able to connect simultaneously to a single Windows 10 PC via Bluetooth, so long as both controllers have their firmware updated. The company's support site still lists a one-pad limit when connecting via Bluetooth. We are awaiting a response about that discrepancy.

However, there are a number of complaints and questions regarding similar issues that still exist on the Microsoft XBox forum regarding controllers on Steam with no marked solutions as of yet. This is usually pointed to a SafeFileHandle issue on connected devices after Anniversary Update issue in Windows:

As of update 1607, kernel32.dll CreateFile() using only the flags GENERIC_READ and GENERIC_WRITE and 0 for dwShareMode no longer allow exclusive (non shared) access to devices needed in some circumstances. An example of a device that is not allowing exclusive access any more is the Sony Dualshock 4 Game controller. Any attempt to connect sets the IsInvalid field for the returned SafeFileHandle.

Windows Update 3176938, released August 31, addressed most of that problem (sloppily). There's a shared responsibility with Microsoft at the foundation but platforms like Steam aren't doing much to push for a solution or change how they handle aspects of input and software developers aren't going back and accounting for evolving hardware.

With regard to Steam, the most updated drivers and patches for games which may address title specific issues are not always present.

To that note you'll want to visit the developer / publisher website of the games you're playing and check to see if newer patches exist which may solve the issue in specific titles while you wait for the general issue to be resolved.

Namco Bandi has a few upset customers over their dismissive approach to the Elite controllers functioning in an unexpected manner while SquareEnix has some upset customers using this controller but over a different functional problem. Other developers have been more proactive in the issue but generally the low install base drives overlooking solvency ("low hanging fruit" and all that).

I can confirm that turning off Xbox configuration support in big picture mode on Steam is the fix for this problem. I just turned it on last night and forgot about it, then today could not use my right stick at all in games. I came here and remembered I had just done this last night but had not disconnected and reconnected my controller until this morning, switched the settings back to unchecking Xbox controller support and everything works fine again.

Not the answer you're looking for? Browse other questions tagged steam controllers windows-10 or ask your own question.

2
Using the Mayflash GameCube to USB adapter. All buttons work except the C-Stick?
3
How can I map the camera in League of Legends to a touchpad on the Steam Controller?
1
Locking the mouse cursor to an Xbox 360 controller, on OS X
1
PS4 Controller Making False Inputs
0
Xbox 360 controller axis doesn't go back to zero (or center)?
1
Why did my Xbox One Controller stop working with Steam?