How did tracking change to account for GPS drift?

I opened up Pokémon Go this morning to complete my daily ritual of catching a Pokémon and spinning a Pokéstop, but I was told to update. When I did, I took a quick look to see what was updated and I saw this: 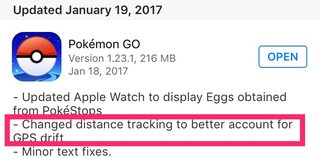 What does this mean? Will I not be able to hatch eggs/get buddy candy without moving anymore? Or are distances from GPS drift going to be better accounted for?

I found this article that explains what GPS drift is and what the fix attempts to do:

GPS drift is where the satellites that track your real-world location can’t quite find you, causing your little mini-me to wobble about on the screen.

That explains what GPS drift is. The fix attempts to improve this so that you don't get any "free" steps anymore (experience the wobbling):

Such wobbles were a happy circumstance for users though, as they could slowly accrue step counts without having to move a muscle – quite the useful trick especially when it’s so chilly outside.

But Niantic has put the breaks on such a mini hack, despite the fact that the step tracking in general is pretty flawed and inaccurate.

According to that article, its a visible update. Despite this, I don't think it's something that can be totally fixed since GPS is never 100% accurate, it's just that Niantic is attempting to account for it better, which means you are less likely to experience the drifting or they are limiting the amount of drift you can expect to see and won't get as much free steps anymore. As that picture you included even worded, they say its "to better account GPS drift" and not a total removal of it.

Unless Niantic put some sort of buffer on how they register steps in accordance to distance moved to totally remove the drift (which is something they probably won't tell you in case you're looking to abuse GPS drifting), it likely still exist. This does not appear to be the case as one other article states that the drift is still there after trying the update themselves. It appears it limits the amount your avatar will drift from your actual location, reducing the amount of free steps you gain.

1
Change Email and password + New Account
3
Did the compatibility requirements change?
0
Level did not change in Pokemon Go
12
Why did the distance requirement for my buddy change?
7
Does hatching a Pokémon count towards my Daily Bonus?
3
Change age in current account
14
Has Pokémon GO changed their distance algorithm?