I am playing Leaf green again, and I watched in anime that there is a red Gyarados which is said to be a shiny one. So I want to know is it available in Leaf-Green and how to catch it? I have encountered shiny Pokemon before but not once with Gyarados.

The famous Red Gyardos is not specifically found in LeafGreen

In Pokémon Gold, Silver, Crystal, HeartGold and SoulSilver, the red Gyarados is found in the Lake of Rage. The player has one chance to catch it and the incident triggers the battle against Team Rocket in the Team Rocket HQ in Mahogany Town. When captured or defeated, the red Gyarados drops a Red Scale. While this is the only chance to catch the Red Gyarados in the original games, it will respawn in the remakes after the player defeats Lance and the Elite Four, should the player fail to capture it.
In Pokémon FireRed and LeafGreen, in the Rocket Warehouse located on Five Island, one of the computers displays information about induced evolution using electromagnetic waves, hinting at what occurs to other Gyarados in Generation II's Lake of Rage.

Yes, there are shiny Pokemon in Leaf Green, so you should be able to encounter it (or a shiny Magikarp). Just keep on grinding, and make use of the usual tactics to increase your slim odds.

Any shiny Gyarados that you can find will be red no matter what. The easiest and most common way was in generations II or IV when they appeared in the Lake of Rage as a sprite that you only had to talk to. 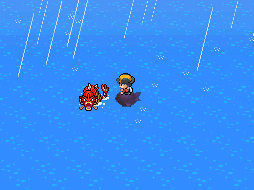 Not the answer you're looking for? Browse other questions tagged pokemon-fire-red-leaf-green or ask your own question.

5
How do I get Mew in Pokemon Fire Red?
1
Shiny Starter Pokemon on Fire Red using a GBA Emulator on Android
4
Do Pokemon Fire Red/Leaf Green use the new or the old EV/IV calculations?
3
Save money in Pokemon FireRed
2
How to get past this old man in Leaf green?
4
Do non-Kanto Pokemon evolve before getting the National Dex in a randomised Fire Red?
2
Do Moltres and Articuno exist in Pokemon Leaf Green?
3
What's the deal with FRLG hidden items?
0
Best place to grind for the Pokemon League?