Do Dragon Shouts belong in Schools of Magic?

We know that certain Dragon Shouts are affected by "Fortify [School of Magic]" potions.

Furthermore, it seems like certain dragon shouts are affected by certain perks.

This would certainly suggest that Dragon Shouts are tagged with a School of Magic. This would also fit with other behaviors in the game.

It is entirely possible that either of the above links are incorrect. So I wish to ask: Do the Dragon Shouts belong in a particular School of Magic. For example, is Slow Time an alteration spell?

Looking at the Creation Kit, it looks like the issue with Intense Flames is that it actually was implemented on each fire spell individually and was not added as an effect on fire shouts. I believe this is because unlike Augment Flames, which simply applies a modifier to any Magic Effect with the "MagicDamageFire" keyword, Intense Flames has to apply a separate magic effect on spell cast which applies the fear effect. Based on the Creation Kit interface, it does not appear that Magic Effects can apply other Magic Effects without using a Papyrus script. With Papyrus, they probably could add a script to each Magic Effect with the correct keyword that applies the effect if the player has the perk, but that could cause a performance hit and the Papyrus engine is not exactly known for its stability, so this is probably why they opted to use the method they did. Interestingly, the effect itself is actually considered Illusion, probably since it is applying the same effect as Fear.

Also, although this screenshot does show a "Voice" spell applying the effect, that particular spell is only used by Alduin; none of the other Voice powers have the effect. 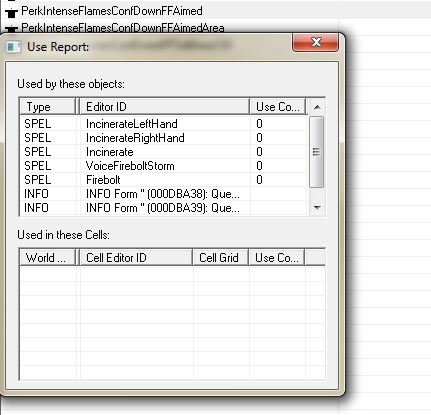 To answer the main question, Shouts do not belong to a school of magic. In fact, Shouts are not spells at all - they are a separate type of magic which all have up to three ranks. Using a shout of a particular rank casts a different spell of the "voice power" type. Voice Power spells can have a school, for all spells this appears to be the school of the first Magic Effect on the list of the spell's effects. Note that this can also be blank - Fire Breath's main effect has no school which causes the voice power spell it casts to have no school, while Frost Breath's main effect is Destruction so the voice power spell it casts is Destruction. Whether or not a particular perk applies to a particular Shout is going to depend on how the Perk was implemented, how the Voice Power was implemented, and possibly how the Magic Effects applied by the Voice Power were implemented.

EDIT: To try and make this more clear, I've included a few pictures of the Creation Kit. Shouts are a separate type of Magic from Spells, but cast Voice Power spells at each rank (which are different from "spell spells", like Fireball). Each Voice Power spell applies Magic Effects, which each have their own school (remembering that the first effect defines the spell's school). 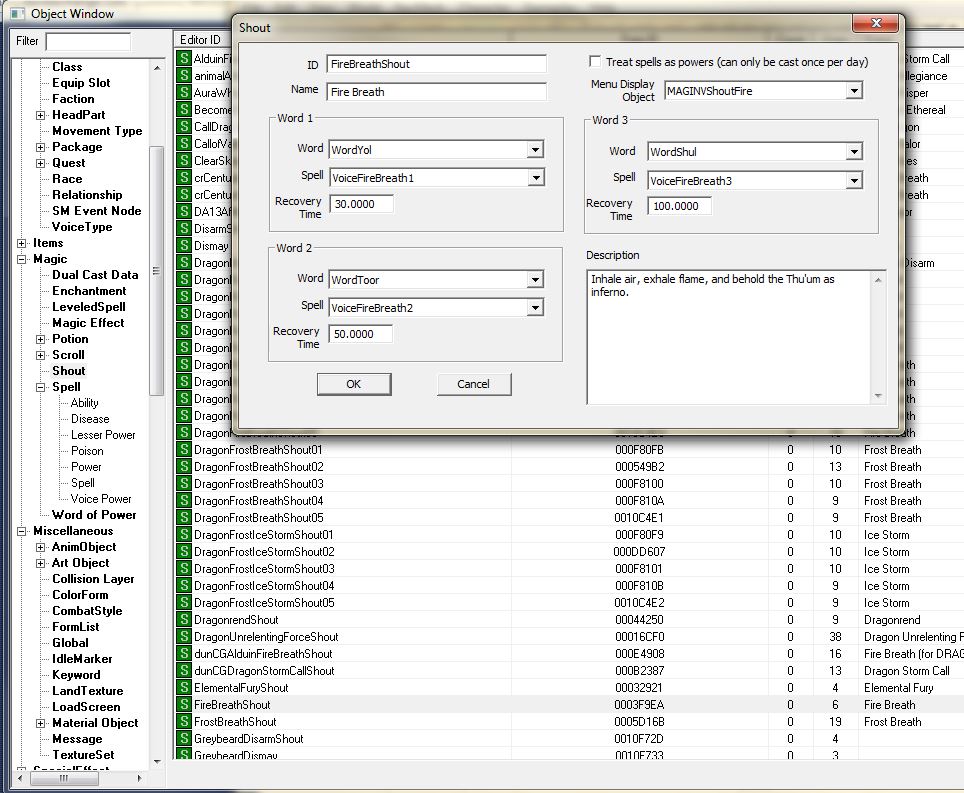 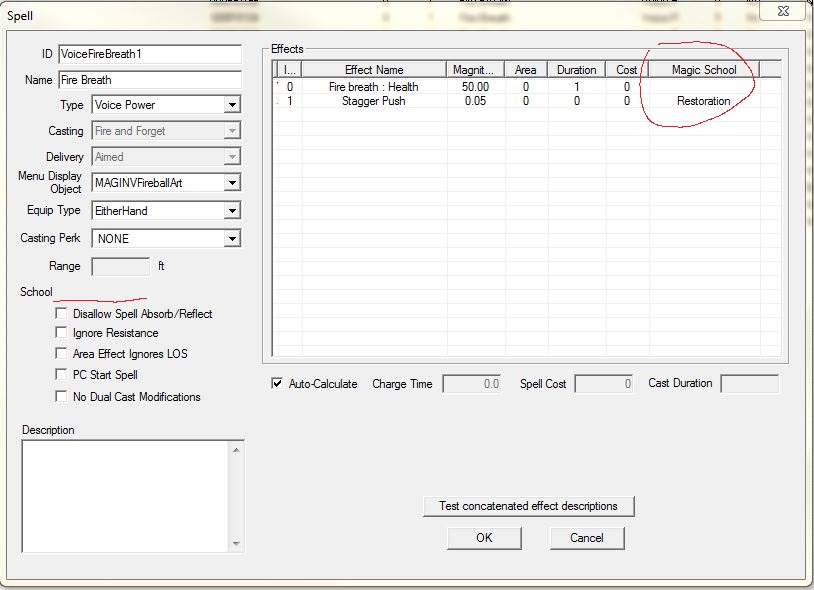 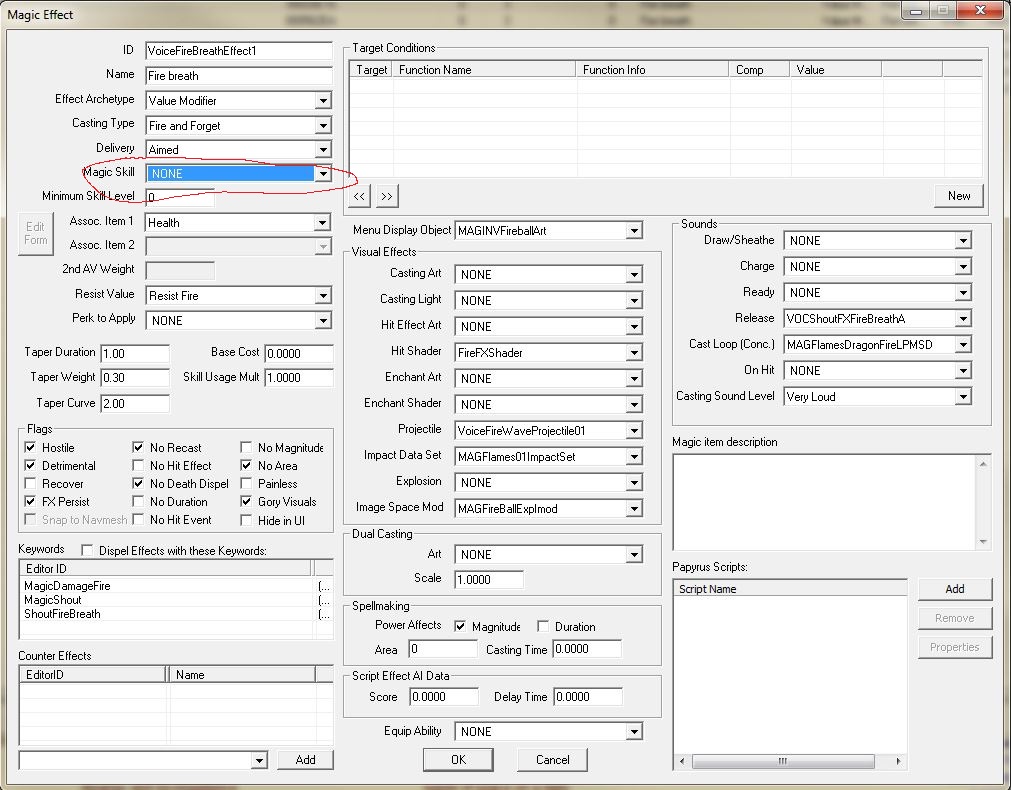 6
Dragon shouts - how to find locations in-game?
18
Why am I unable to use dragon souls to unlock dragon shouts?
18
How many dragon souls do I need to unlock all shouts?
2
Why are some things invisible?
2
Why does my Magic Stats menu say I have 18 shouts unlocked, but my list of shouts shows only 17?
26
How to make Skyrim more challenging at higher character levels?
1
I can't do dragon shouts
8
What is the purpose of Dragon Shouts level 2 and 3?
3
Are there shouts/words for shouts that are missable?