What are the odds of getting an evolution item from a PokéStop?

Thanks to another question on this site, I know that I can obtain the new items required for the new evolutions from PokéStops. My question is, how common are these items? I've spun about a dozen stops and not seen a single one yet. Most PokéStop items are more common than that, so I'm wondering if they are pretty rare, or if I've just been unlucky.

tl;dr: While no concrete numbers have been confirmed yet, the odds of finding one from a PokéStop are very slim. Based on the reports I've been reading, it looks like the odds to receive one are at or around 1%, possibly lower. In fact, from this report, the calculated probability of receiving an evolutionary item seems to be roughly 0.14%, as a grand total of 33 evolutionary items were received among over 24,000 drops.

However, it's worth noting that it seems like you are now guaranteed to get an evolutionary item when spinning your 7th day streak PokéStop, according to this in-game notification: 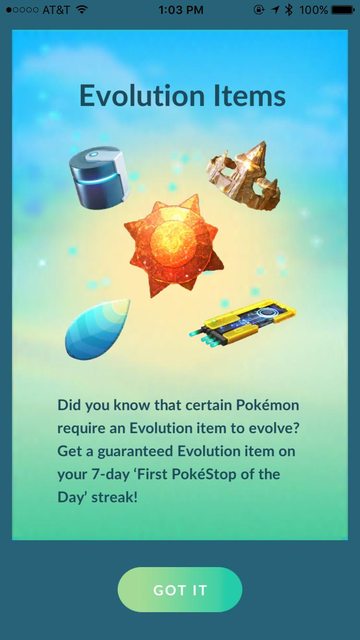 Until this update has been around for longer, it's not possible to have the most accurate numbers in terms of the probability of these items appearing from PokéStops, but numerous users have been reporting that they received an evolutionary item as a daily streak bonus reward (especially so for 7th day Streak bonuses).

For instance, this thread:

Probably coincidence, but I got my first and only evolution item from my 7-day streak Pokestop spin. 100+ spins before that came up empty.

I got one last night. But also got one on my 7-day streak this morning.

Got a metal coat from 7 day spin

One comment linked to this thread which originally speculated that these items only came from 7th day streak spins (this has since been disproven numerous times, though it has now been confirmed that you are guaranteed an evolutionary item for this):

I got my Sun Stone on my 7 day spin this morning too. Havent found an evo item since. Increased chance on 7 day streak spins? Or just plain luck?

I got an upgrade with my 7 day streak this morning. It may be that we're guaranteed an evolution item at each 7 day streak but you can also get them randomly at pokestops.

I also got my sunstone today at my 7th day streak. My friend got a dragonscale in his first spin of the day( normal streak).

7th day spin for me this morning too, I got an Up-Grade

I just spun for my 7th day streak - got Upgrade. Prior to that, I had to spin pokestops for almost 8 hours before I received a King's Rock.

As many have noted, however, you are able to get these items randomly from PokéStops. Some users in that thread also estimated how many spins it took them to find their first evolutionary item. From that thread:

I spun over 400 yesterday to get my first sun stone. this took 5 hours of downtown grinding.

I spun over 100 today as well as yesterday and nothing so far. Not even for my 6 day spin.

About 250 spins today, got a Sun Stone from a random spin.

Meanwhile I'm on spin 175 for today and still not a single evolution item.

Users in this thread have also been reporting how many spins it took them to find their first evolutionary item (or not):

Within my first 4 in the way to the station this morning, i received a Sun stone. Nothing since.

A fourth thread has been aggregating data to try to figure out the drop rates for the new items as well.

Got an upgrade after maybe 50 odd spins?

I received a dragon scale this morning on my 7th day streak pokestop. In the U.K. near Reading.

My son got Up-grade on first spin of the day today (not 7-day). Maryland, USA.

In addition to all of these reports, from the comments above:

Additionally, I have received 0 evolutionary items from about 10 spins since they became available.

As the other answers show, the drop rate outside the 7-day streak is really, really low.

2
What determines the frequency (and type) of acquiring special items?
23
How do I get evolution items like King's Rock?