What scores are needed for a Fire Emblem Heroes Arena rank?

In Fire Emblem Heroes, the highest offense score I've been able to get is a little over 3600, which gave me a rank of about 94000 for about a day before I dropped back to unranked. What score is needed to have a rank at the end of each season? Also, is defense score relevant to arena rank?

The Arena system has changed drastically since this question was first created, but here is an answer to show how Arena works now:

What score is needed to have a rank at the end of each season?

Any score :)
With the updates to how Arena works, any score can now get you a rank, you only move up or down in ranking based on your score. So make sure to play at least one Arena battle each week, even if you don't like it, to gain bonus feathers and orbs!
From my screen shot below, you can see I am Rank 17 (Tier 17) "12 Deadlords". At the end of this week, I will be going up to Tier 18. 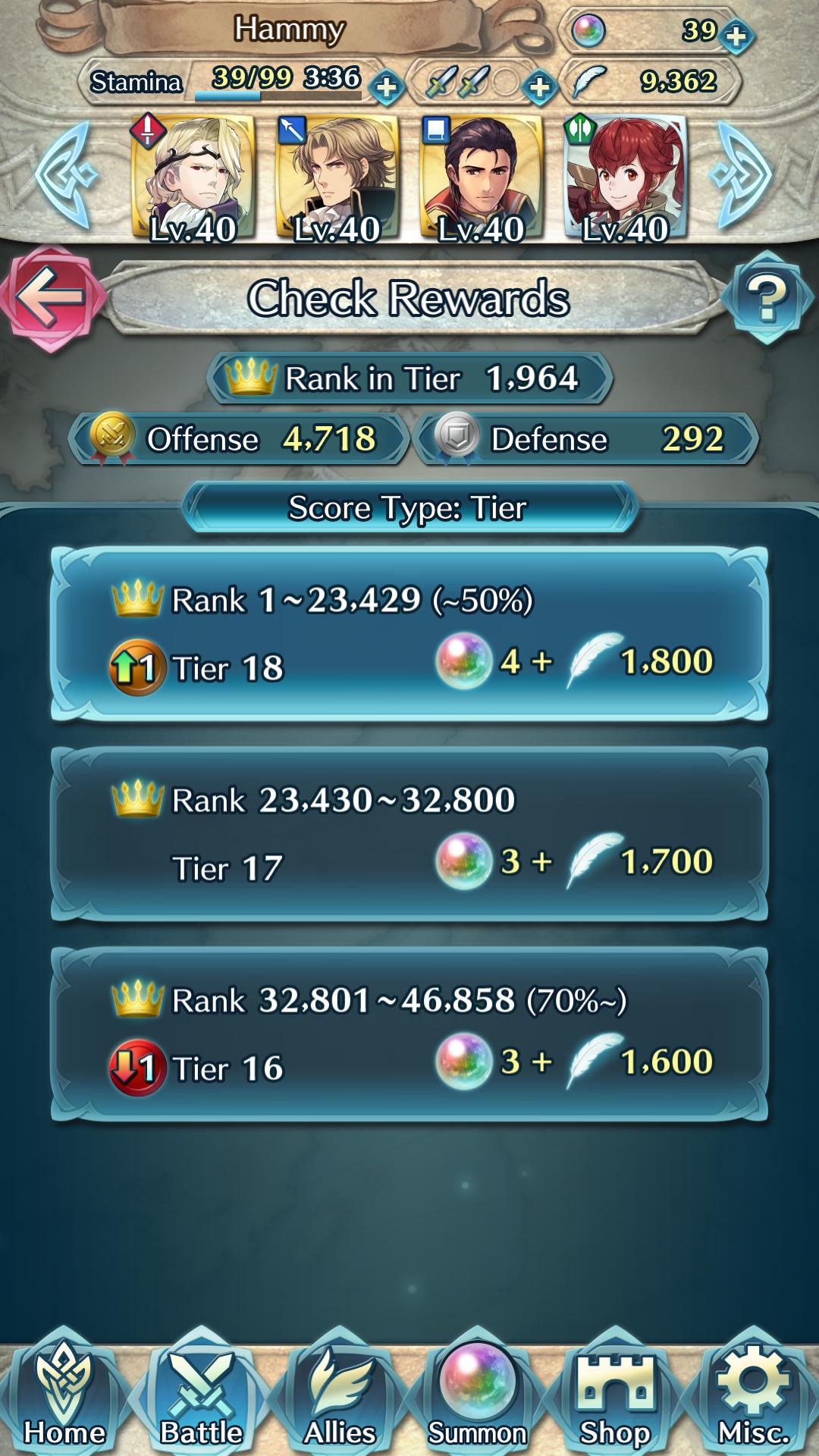 Going up or down Tiers now factors solely on the other players in your Tier.
As you can see in the screenshot, I am ranked 1964 of all the players in Tier 17 with my 4718 score. (defense score does not impact ranking). The top 50% of all the player will go up to Tier 18, while the bottom 30% will drop down to Tier 16. Everyone in the middle will remain in Tier 17.

Since the score you need depends entirely on how others in your Tier are scoring, the lower Tiers are easier to get out of, while the higher Tiers are harder to advance. For example when I was in Tier 13, I advanced to Tier 15 (skipping 14 entirely) with a score of only 3100ish. Now in Tier 17, that score would most likely keep me in Tier 17 and no longer advancing.

Although the higher Tiers have the top players and thus are harder to advance, you can see the rewards get better as you go up.
You always gain Feathers equal to your Tier x 100 (exceptions being the two highest Tiers). You gain orbs based on your rank as well, but higher tiers can obtain more (you can see I'll be getting 4 now that I'm in Tier 18), when I was only getting 3 before.

Here is a image of all the rewards you can get per Tier: 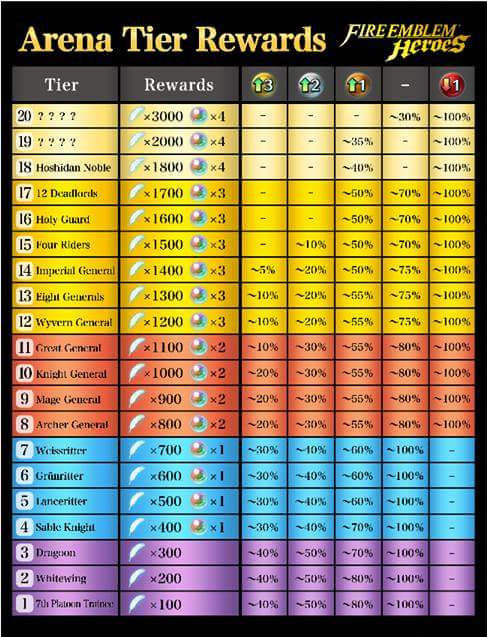 It's getting harder and harder to place in the top 100,000! Since player scores are based on the sum of all stats from your team (the higher stats your team has, the harder the opposing teams you'll see, the higher your scoring potential) and how many members of your team survive each fight, the truly ambitious scores are going well beyond the reaches of non-IAP (in-app purchasers, who spend real money) players.

That said, I'm hoping the rank system and the tier system are related, and as the scary players get promoted to more challenging, hopefully higher-reward tiers, it will be possible to place without having to pay massive amounts of money!

Getting an Arena score of atleast 4000 should be enough. Im sitting on 4050 something and im rank 27,000 ish. I have probably dropped a bit since then but you get the point. Use heroes with a high stat rating to make the most out of arena, and if you want a high score you need to play on advanced.