I have been wracking my brains trying to remember the name of a CRPG from what must be either the late 80's or early 90's. I don't have a screenshot or anything but maybe my description will jog someones mind.

The game was normally played in a pretty much 2d eagles eye view except for combat sequences which would have the characters seen sort of sideways. The player had a party of 4-6 characters of which I think 4 were player made and 2 could be hired from different guilds. While not in combat a single character was visible whereas in combat all characters could be moved.

The game was graphically slightly similar to castle of the winds using tiles to visualize everything and was turn based both in combat and out if I remember correctly. The dungeons were preset but either most encounters or at least most loot was randomly generated.

I'm also almost certain it was shareware. Any chance anyone can put a name to this description? I realize this doesn't meet the game identification tag standard, but given that if I could find a screenshot I would almost certainly be also able to find the game I figured I'd give the question a shot.

I've spent roughly an hour Googling for the game before posting and I managed to find this screenshot: 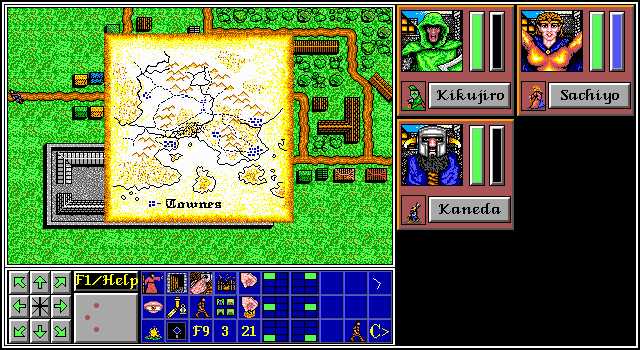 What is the game?

A reverse image search comes up with the game The Aethra Chronicles, which appears to match the screenshot.