How can I cure tourism with an MKS medical bay in KSP, and do I know if it's working? 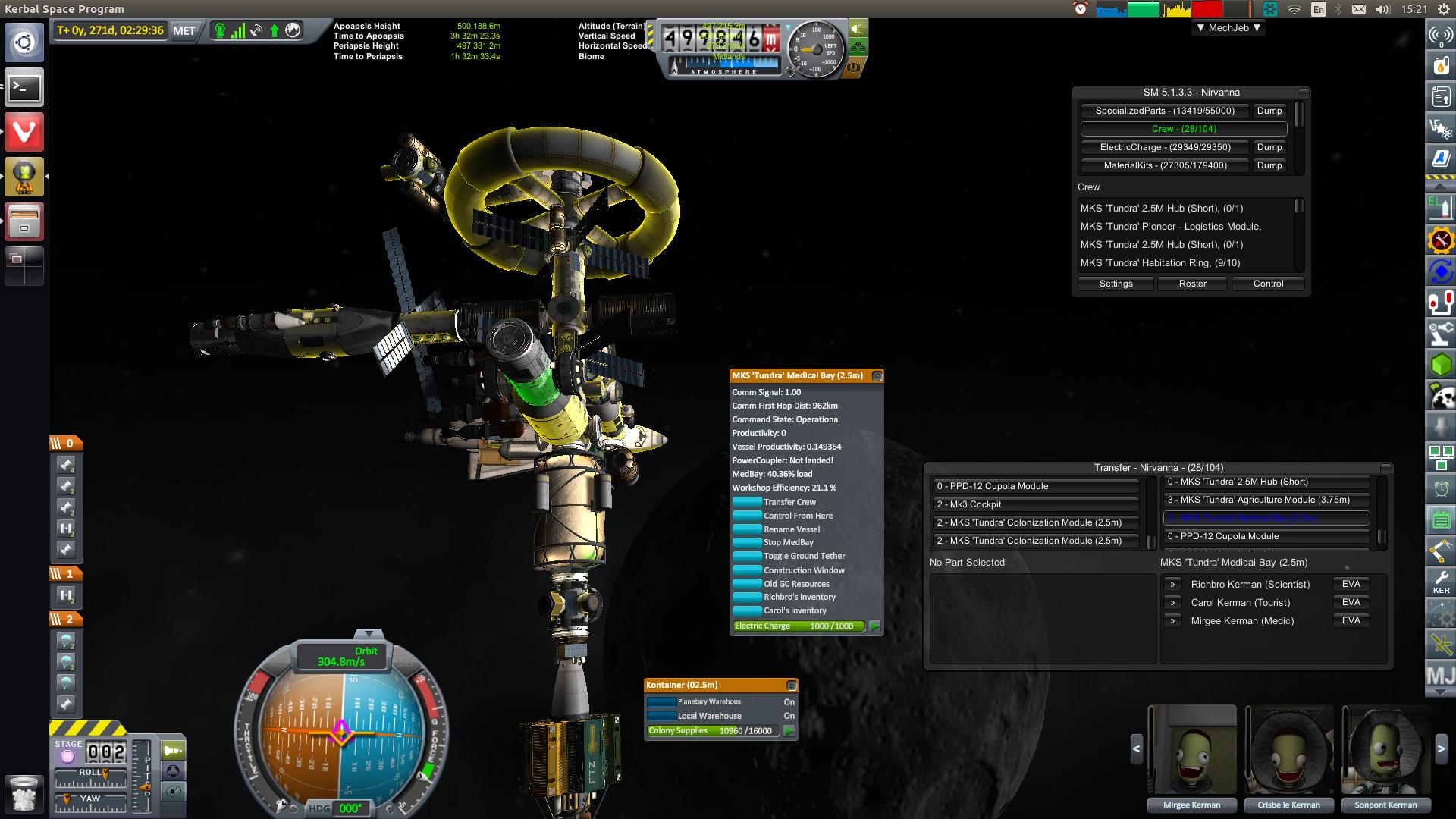 Here's the situation: I have a station full of Kerbals who have gone insane in space due to homesickness, and now believe they are tourists. The station has a medbay (the MKS Tundra Medbay highlighted in green), and colony supplies for it. I have sent out a team of medics, scientists and engineers to help the locals, and to construct more habitat modules.

Now, I have a scientist, and a medic for good measure, in the medbay with one of the unhappy tourists. The medbay is active, and showing a 40% load. Is this working? Is that load % the "it's working" indicator? How long will it take to cure a Kerbal of tourism? What about 20 Kerbals? I've timewarped ahead a few days, but there is no sign of change in her condition.

And a bunch of other general utility mods that aren't relevant to this station. Alarm clock, TAC fuel balancer, persistent rotation, Scansat, Infernal Robots (not used).

Well, the medbay eventually worked on it's own, although there is no progress indicator. That sort of makes sense, how would a doctor know in advance how long it will take to cure a case of schizophrenia? Or even if it is possible? There is, however, an indicator that the med bay is active: the label in the medbay's right click panel that says MedBay: 43% load. That will have to suffice.

The first tourist has just been healed. I am not sure how long it actually took, but there are 23 more to go, so I should be able to get a rough idea of how long it takes, and how much the time varies from one case to the next. And, whether switching vessels is actually necessary or not.

The engineers built and inflated three massive habitation rings while the medical staff were still working with patient #2. As soon as the locals realised that a hundred meters of zero-g bouncy castle was available to them, they perked right up and promptly volunteered to work for another 6 to 10 years, as long as they can stay here.

The takeaway: building new living space is far more effective at treating mental illness than counselling is. Even better, is building enough living space in the first place to keep a 2 to 20 year buffer, depending on how long you'll be timewarping various missions. Hopefully, 20 years from now in game time, I'll have 50 to 200 passenger interplanetary cruise ships cycling around the inner system and asteroid belt, that I can use to conveniently swap out crews from major stations. 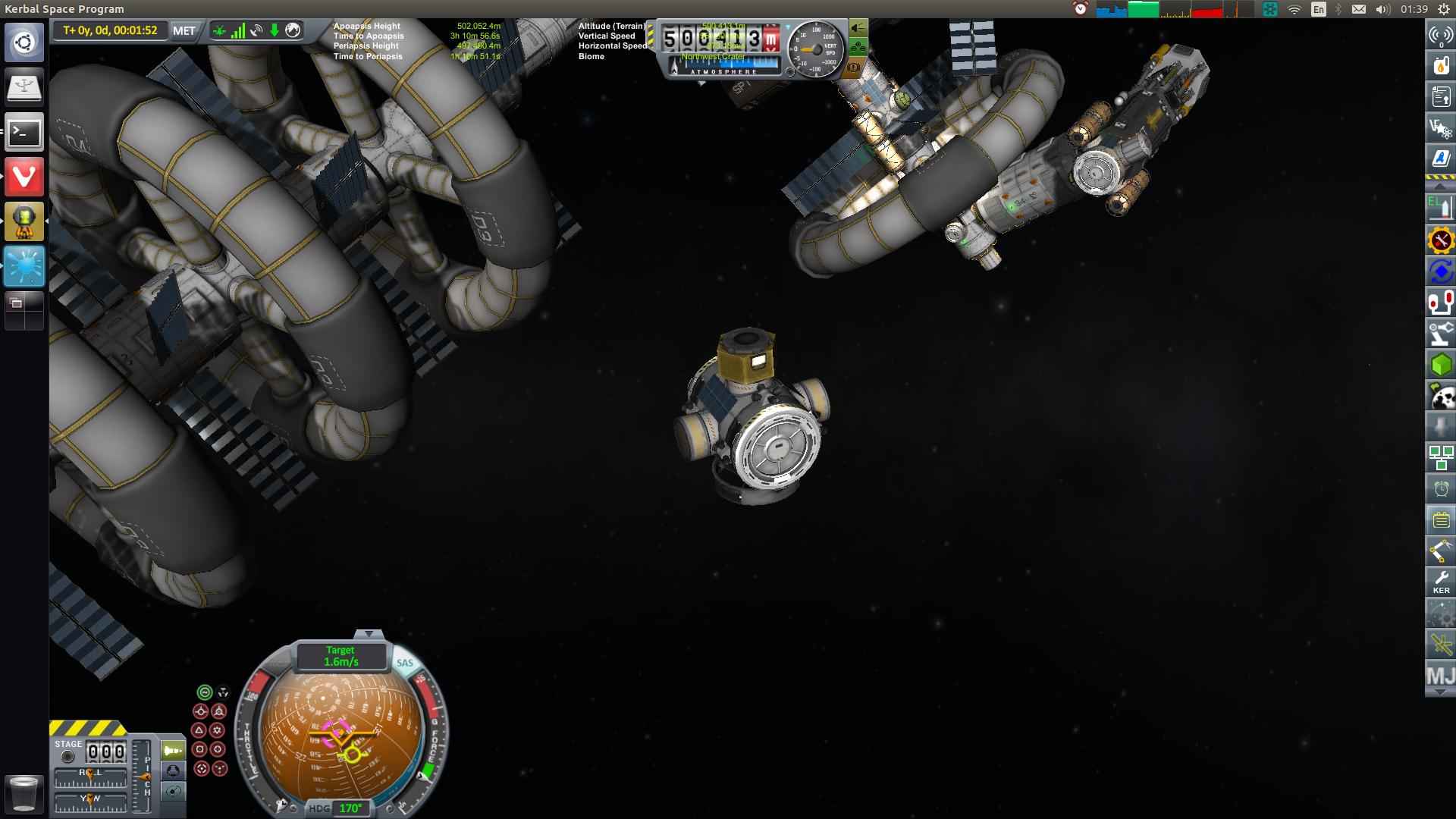 The new habitats are on the left, the Extraplanetary Launchpads construction facility is on the upper right. The little guy in focus is super helpful for moving stuff around the station. It has enough torque in its reaction wheels and oversized RCS thrusters to basically ignore the center of gravity of the load. It is also useful for carrying parts to engineers on EVA, that are too large for the engineer to haul around with a rocket backpack.

Note: Kerbal Alarm does seem to have some integration with USI's life support mod. It looks like I could set an alarm for when supplies run out, or possibly even when the first Kerbal has had enough and wants to go home.

Not the answer you're looking for? Browse other questions tagged mods kerbal-space-program or ask your own question.

24
How do I clean up this space-town?
19
What are the key design principles when building a space plane?
11
Do Kerbals die of natural causes?
10
How can I get science from my space station to cash in the points?
0
Lag is ruining KSP - any ways to improve performance?
4
How to tell scientist from pilot from engineer?
5
Kerbal Space Program - Can I transfer Parts to another in-orbit vessel?
5
Mounting a time-limited rescue mission for kerbal inbound to Kerbin
5
How can I cheat docking in Kerbal Space Program