What is a 'perfect IV Pokemon' and how do I get one?

I went to the Battle Tree but got flat out crushed. I went to a website for help, and it began speaking about perfect IVs. It also said EVs.

What are they, and how do I get one?

First of all, you need to know the meaning of IV and EV.

How do IVs work?

IVs are determined when you first encounter a Pokemon, when you hatch it or when you obtain it. The only way to influence IVs is Pokemon breeding because the offspring will inherit some IVs from their parents.

A perfect IV Pokemon is a Pokemon with some its IVs (usually 4-5 of them) at the maximum value of 31. This can be extended to the right Nature, too.

To see your Pokemon's IVs you need an NPC called the IV Judge (or Stats Judge), which is located at the Battle Tree. Rather than judging Pokémon himself, however, he instead gives the player an upgrade to their PC to judge Pokémon, but only after the player has hatched at least 21 Pokémon Eggs.

Here's how to understand the IV judge statements:

How do EVs work?

In Generation VII, Pokémon are limited to a total of 252 EVs per stat, and 510 EVs in total. As a result, the maximum amount of additional stat points that can be acquired by EV-training for a given stat is 63, in comparison to a Pokémon that is uninvested in EVs.

Just for reference, this is how a stat is calculated:

Pressing the Y button on a Pokémon's Summary screen will show a graph depicting the EVs it has accumulated so far; stats that have reached 252 effort values will sparkle.

How to give EVs to a Pokemon?

There are different methods: 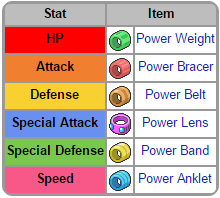 If a Pokémon holding a Power Weight and infected with Pokérus defeats a Caterpie, which gives 1 HP EV, it will earn 18 HP EVs

However, a Caterpie that is called as an ally will instead yield 36 HP EVs

In this way, only 7 ally Caterpie must be defeated to max out HP.

Not the answer you're looking for? Browse other questions tagged terminology pokemon-sun-moon or ask your own question.

11
What do the letters Japanese trainers use on the GTS to indicate IVs mean?
1
What are dog tag + bow + no kill servers?
4
What is the Festival Plaza and how does it work?
6
Are there any factors that affect how fast a pokemon gains experience on Isle Evelup?
3
How can I get Chimchar in Pokemon Sun & Moon?
38
What does the bracketed number mean in longplay titles?
2
Older battle videos in Pokémon Sun/Moon say they can't be viewed
2
Help me run the numbers on a perfect IV ditto
22
What does Packets / Packet Loss mean
5
What real-life fruit do the Berry names reference in Pokemon?