Is there a good weapon for Aligern?

I've had Aligern in my party for a while now and he doesn't seem very useful to me, which I think is because of his weapon skill.

Aligern is trained in medium weapons and has inability with all other weapon types, he also is unable to learn speed. I.e. you can neither improve his speed edge nor his speed stat pool.

Yet, the vast majority of medium weapons I found are speed based, the only non-speed based ones I can think of are his starting mace and the battleaxe, both very weak weapons.

This leaves me with the options of either

Which option is best? Is there a good might or intellect based medium weapon in the game? If so, where can I find it?

tl;dr don't bother with Medium Might weapons for Aligern after Sagus Cliffs - use Heavy Might or Light Intellect weapons instead

Sadly, T:ToN is awfully unbalanced in this aspect; most of the good weapons are either Speed-based or Heavy & 2-H. Thus, with Aligern, you can take one of three possible roads:

First of all Aligern has an unique "Living tattoos" skill that makes him better on repetitive actions - each consecutive heal/damage/cast will be better than the last one in chain. This makes him a very good tank/healer (especially if you take in consideration his later skills) because you can either make him soak (and heal himself) the damage or simply keep healing your party members, but indeed not a very good damage dealer, that is unless you make him focused ONLY on combat (using any other type of action would negate the Living Tattoos bonus).

Example of useful medium weapon that uses Might instead of Speed is the Battleaxe: 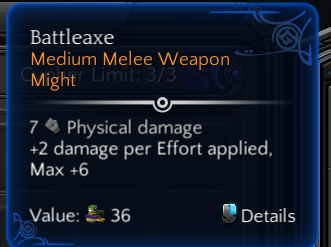 That you can find at vendor at Circus or at the the trader Tantalum in the Valley of Dead Heroes. Nothing fancy, but it is available early and it would cover the low Speed stat that he would have to toherwise use.

1
Are there any issues adding mechanical implants?
1
Is there any advantage to add points to ability instead of Edge?
3
Is there an non evil outcome for the Preservation of Beauty quest?