What is the point of the second option on the start screen in Tōkaidō Gojūsan-tsugi?

In Tōkaidō Gojūsan-tsugi (Sunsoft, Famicom, 1986), at least as I'm playing it in NestopiaUE 1.47, there are two options on the start screen, switched between by pressing select. The first option appears to play through the game normally.

The second option behaves strangely. The game plays normally, except that every time I die, I am transported into the top of a tree at the start of the first level and cannot move. A Kuromaru (ninja) appears and eventually kills me, and then I am returned to the highest checkpoint I reached in the level in which I first died, having lost only one life.

Here's the start screen; maybe someone who can read Japanese can help. 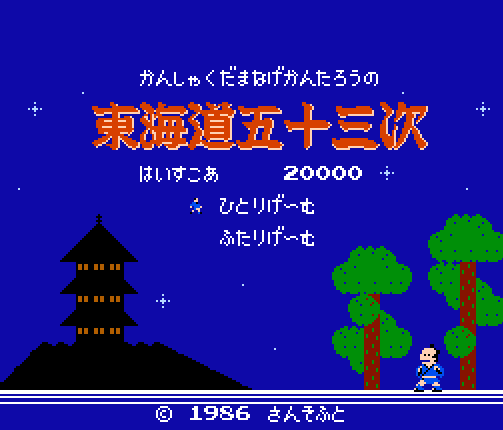 Is this some emulation bug, or is that how it plays on real hardware?

The second option reads ふたりげ~む. Pronounced "Futari Gēmu", it means "Two Person Game"--and as such it is a multiplayer mode.

Not the answer you're looking for? Browse other questions tagged tokaido-gojusan-tsugi or ask your own question.