What is the most effective way to grind for drops from the three spirit dragons?

Dinraal, Naydra, and Farosh are benign spirits flying around their respective regions in the form of elemental dragons. Attacking them with arrows will make pieces fall to the ground depending on where they are hit. These pieces are used for a few shrines, but also for enhancing some Armours.

The pieces that drop are as follows:

Each dragon has their own set of four pieces.

You can only obtain a single piece per encounter with a dragon so there's no point in shooting at them more than you have to. You only need to shoot at them until a flash of light where you hit them appears. That flash is the shard that will eventually fall down. Additional shots will yield nothing. In my experience, it's better to use a single arrow bow as close as possible to ensure that you hit the part you want. I couldn't tell if using stronger or weaker bows make a difference (I'm at the point in the game where all I have are bows 30+).

As for favorable spawning points, it can vary from time to time but here's some places I used to farm them and the time of days. They may or may not spawn immediately, try camping again at the time specified until they do. It will help to have a full set of Climbing clothes as you'll want to be climbing around to get to the best spots. Also having a fire sword/spear to light your fires for camping.

Due south of Hebra Tower there's a ledge where a Korok is hiding on the northern face of the canyon wall. Set up camp there on the eastern end of the ledge and wait until Morning to find him. Dinraal will be flying in from the northeast and will fly right though the canyon. When he's close enough and you feel the breeze, jump toward the center of the canyon and wait til you are close enough. Then take your shot. 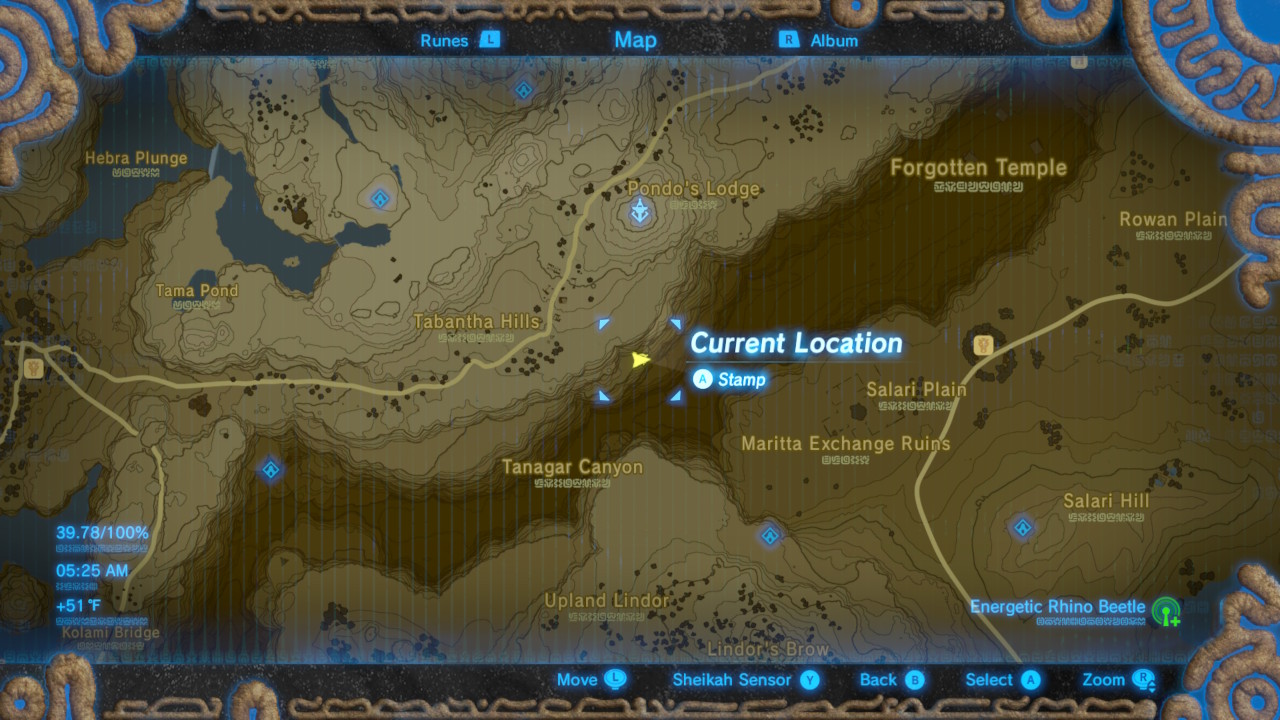 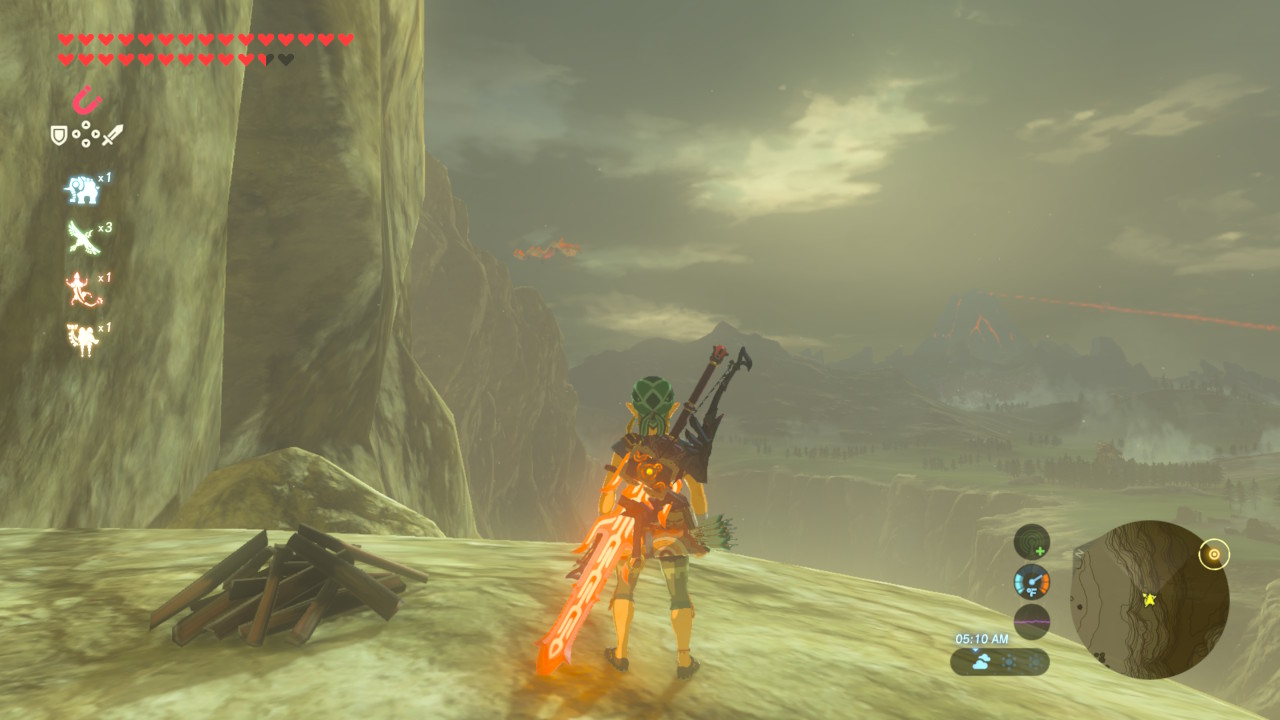 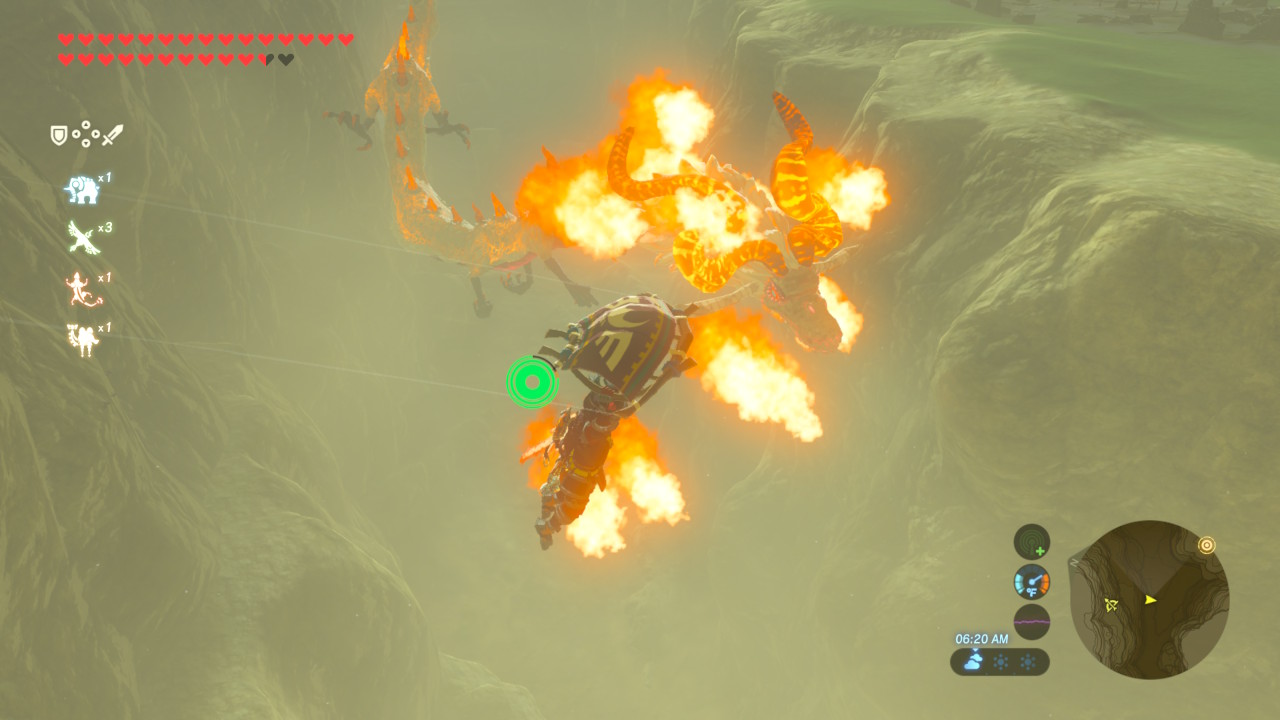 I recommend using a full set of Flamebreaker armor for the Fireproof set bonus so the fire he breathes doesn't hurt you.

West of Mount Lanayru is the Lanayru Road - East Gate. Further in toward the Lanayru Promenade is a ledge on the south wall overlooking a platform on the north wall path. Set up camp at the top and wait until Morning. Naydra will be flying in high in the sky to the east from Mount Lanayru. He will fly right through the canyon very low and up close. Depending on the parts you want, you'll want to shoot from above for the scale, fang or horn. If you want claws, it would be easier to shoot from the north wall ledge. 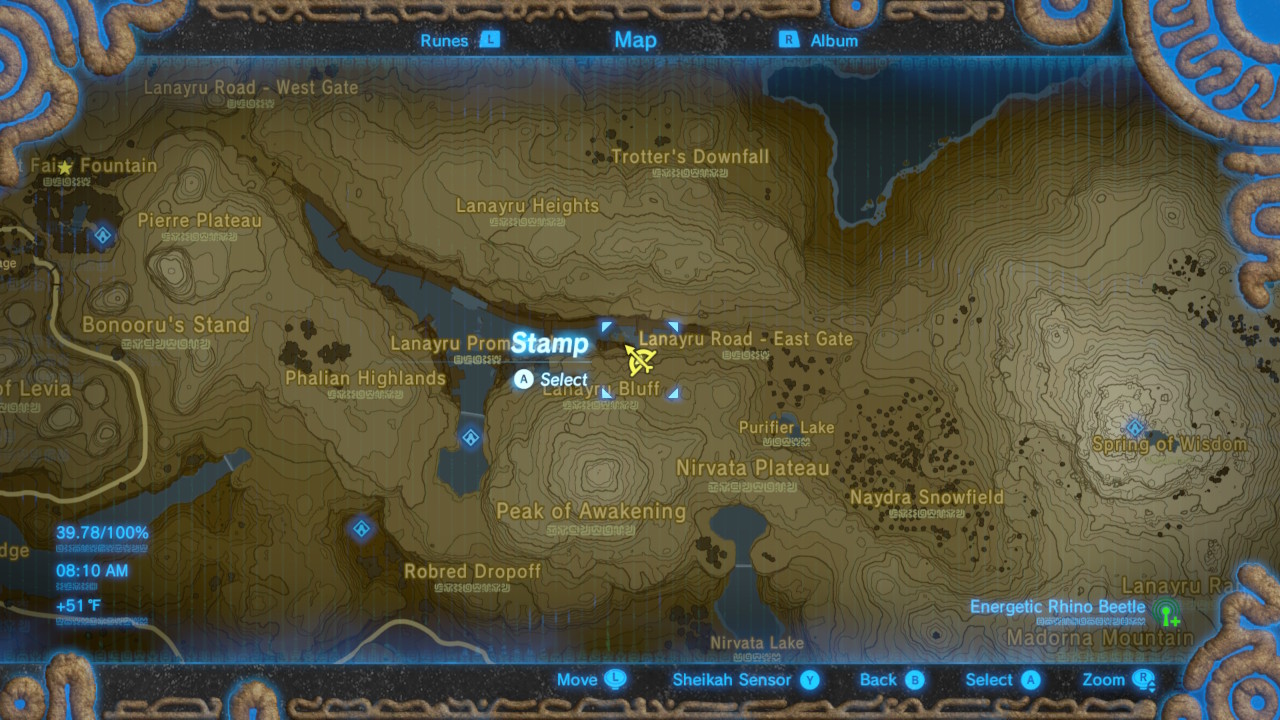 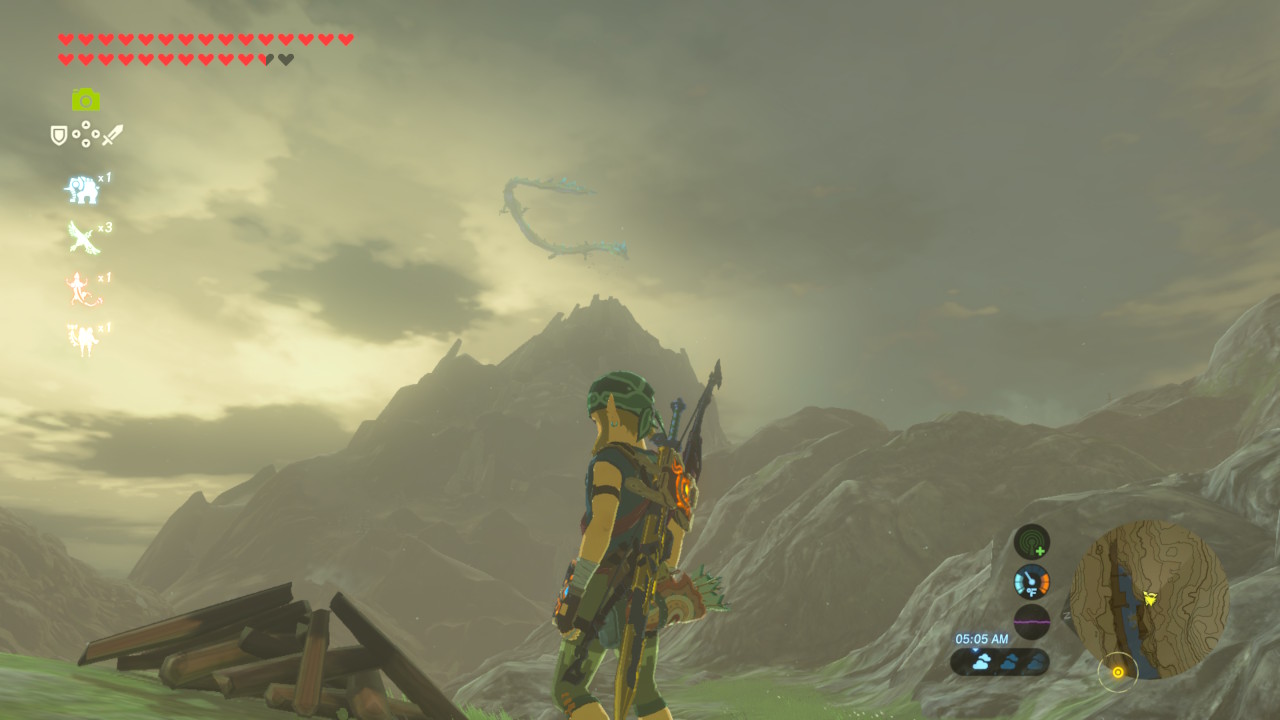 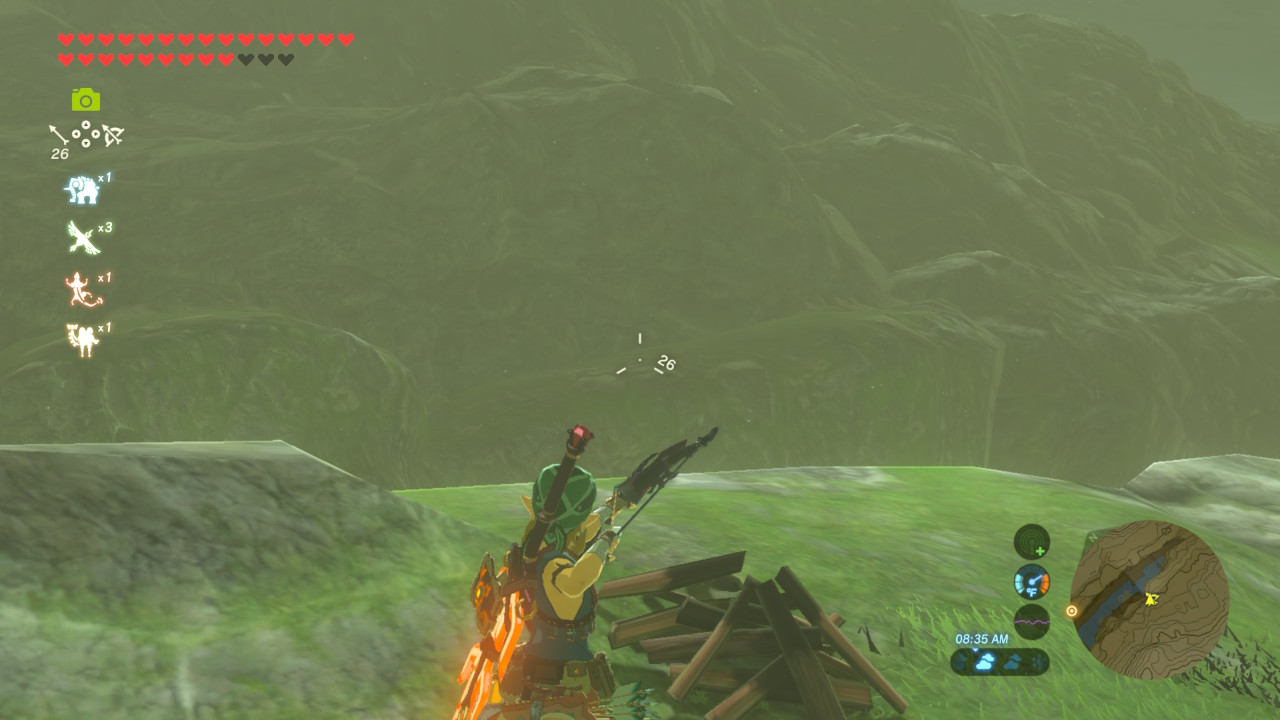 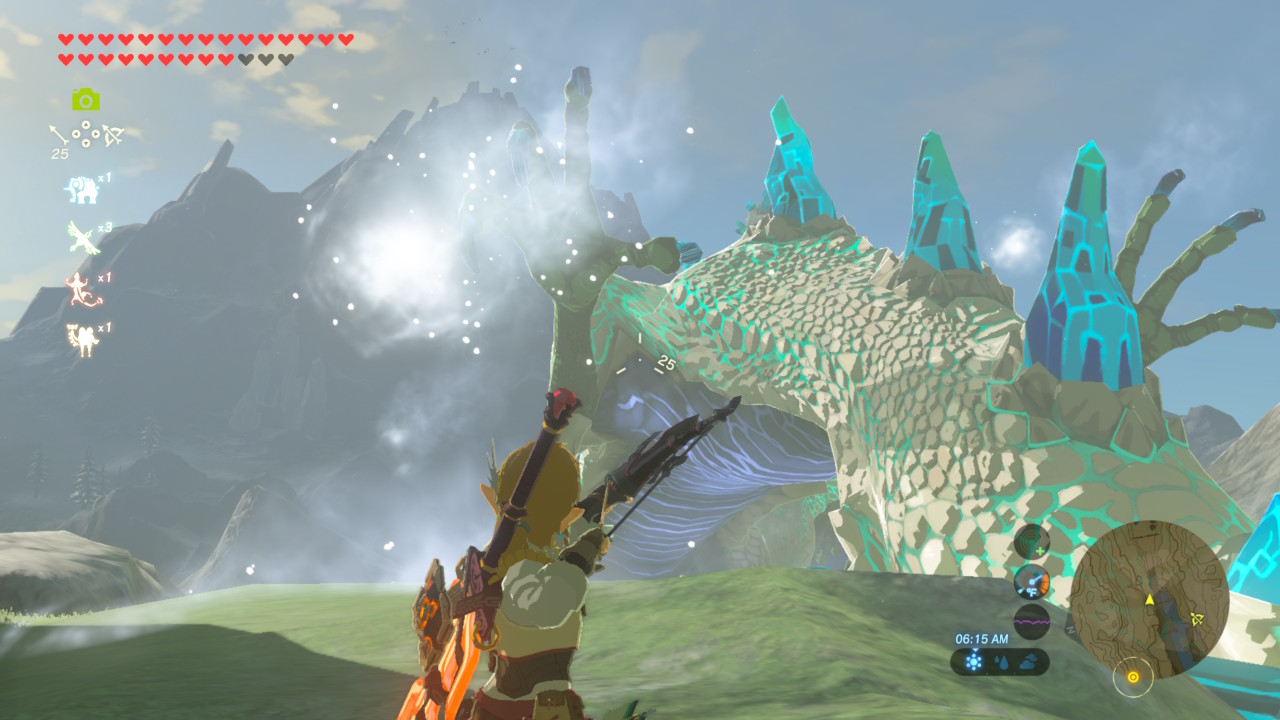 I recommend using a full set of Snowquill clothes for the Unfreezable set bonus so the ice balls he breathes don't hurt you.

At Lake Hylia on the south tower of the Bridge of Hylia is a great place to camp. Wait until Night. Farosh will emerge out of the lake from the north east corner. He should come out immediately after getting getting up at 9pm (2100). If not, wait again until he does. Otherwise, you could try waiting til 1am (0100) in the late late night. But he always came immediately when I tried. He will first fly toward the west and will loop back and fly toward the east in front of you. Wait until he's close enough to feel the breeze then jump out along the bridge. Take your shot when you're close enough. 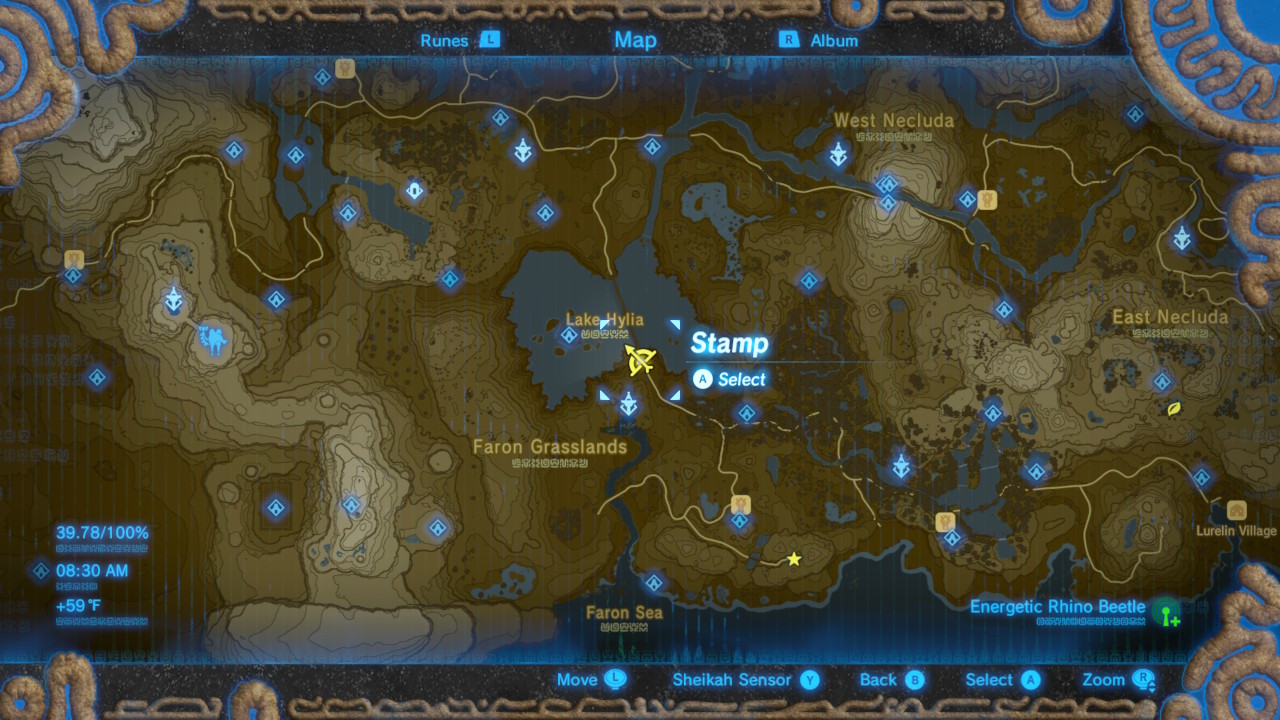 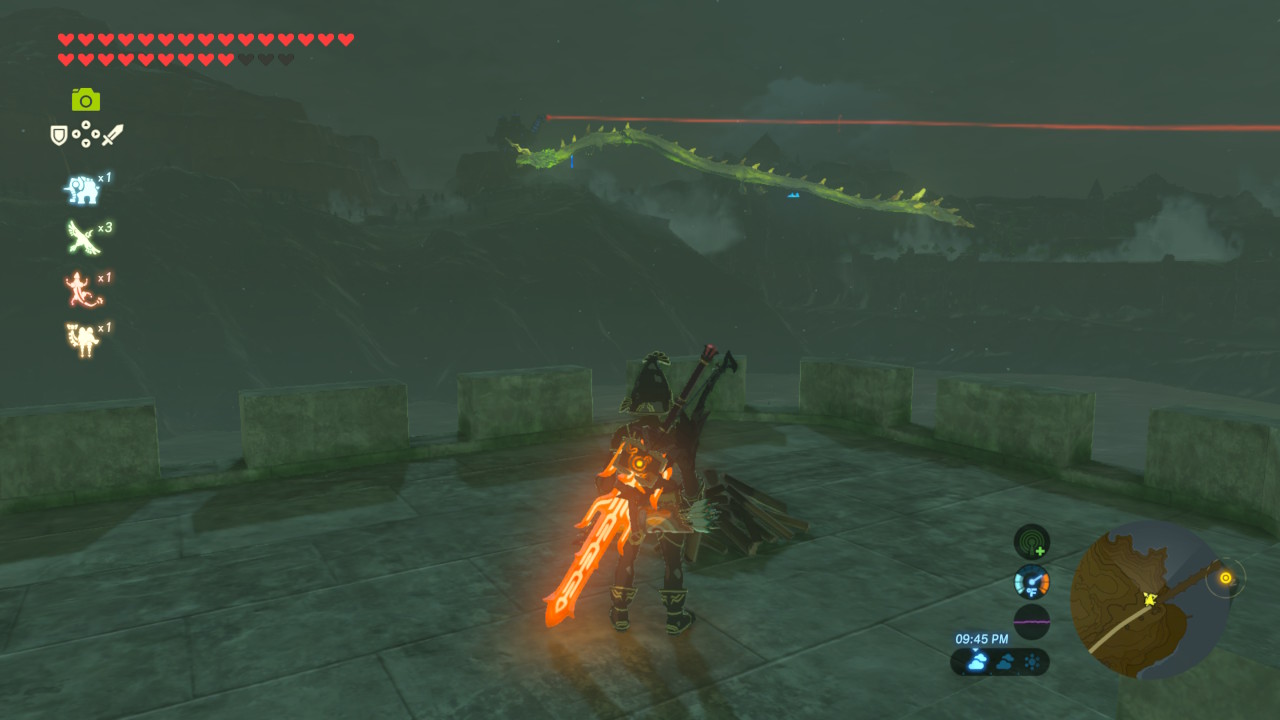 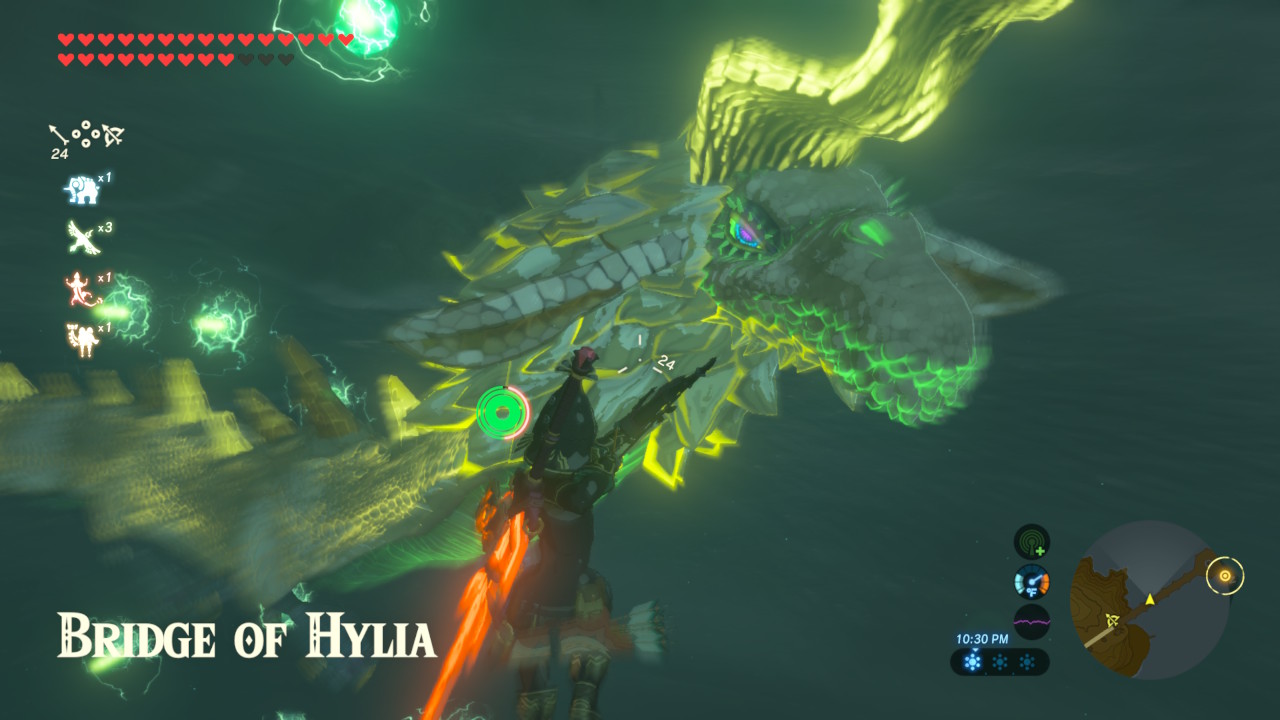 I recommend using a full set of Rubber clothes for the Unshockable set bonus so the lightning he shoots doesn't hurt you.

While I use the Naydra method in the other answer, I prefer these two spots for the other two dragons.

Go to the Lakeside Stable, just south of Faron tower. Rest there until morning, then go across the bridge and to the section in the middle that looks like platform with a Korok puzzle on it. You'll see Farosh spawn above the waterfall directly in front of you, then come down the Waterfall and below the bridge. As he goes under the bridge, jump off and shoot him where you need to. Then, simply go back to Highland Stable and rest at cooking pot till morning again.

Go to Tabantha Stables. Rest at the cooking pot till night. Then, go the middle of the bridge. At around 10:30, Dinraal will fly under the bridge. If you look north up the canyon, you'll see him as he spawns. If he hasn't appeared by 10:00, go back to the stable and rest again. When he goes under the bridge, jump down and shoot off whatever piece you need. Go back to the stable and repeat.

Both these methods have the advantage of you not needing large amounts of wood and flint/fire weapons for large scale farming.

I have not done this but I have seen a lot of speed runners do this: They make a campfire by where the dragon will come to at either day noon or night (the start of that time). Then they shoot the dragon, use the campfire and do it again. They do that for a few minutes and what the dragon drops dose not despawn. So when you feel like you've done enough you can just pick up all of the scales.

16
What is the best way to get rupees?