I have built a mob grinder in Minecraft, 200 blocks into the air. Obviously, in a Survival World, getting up and down the can be difficult, and ugly.

I have attempted to use the "two portals - one teleport" idea; that is, build two Nether Portals in the same chunk, and you can use them to travel between two point is the Overworld. However, I cannot get this to work - I have had mixed results.

I have tried building the two portals 150 blocks away from each other (one at y=50, the other at y=200), light one, and enter the nether, to establish the link, then light the other one. This has given me mixed results. Either:

Is there a way to use two Nether Portals as a form of "Elevator"?

Yes, but you'll need to make the portals yourself

Firstly, break all the portals you have currently.

Secondly, in the overworld, make your first portal and note down the co-ordinates, but divide the X and Z axis by 8, leaving the Y axis the same.

Then, go to the nether in that portal, break the nether portal, and build another one at the noted down co-ordinates, if the portal is not already at that location in the nether.

Now, you can go back to the overworld. Build your second portal somewhere else, and note down the co-ordinates in the same way as I described earlier. Light it, then go back to the nether in your first portal. Do not enter this portal yet!

Build another nether portal at the co-ordinates you just noted down, and if you did everything correctly, going through that portal should take you to the overworld.

Ok so I did quick test of this in 1.7.10 and it worked perfectly. Each block you move in the nether is equal to eight blocks in the overworld, so all you have to do is create a base portal, and place a portal directly above it where you need to go and I mean this it has to be exactly a duplicate like so: 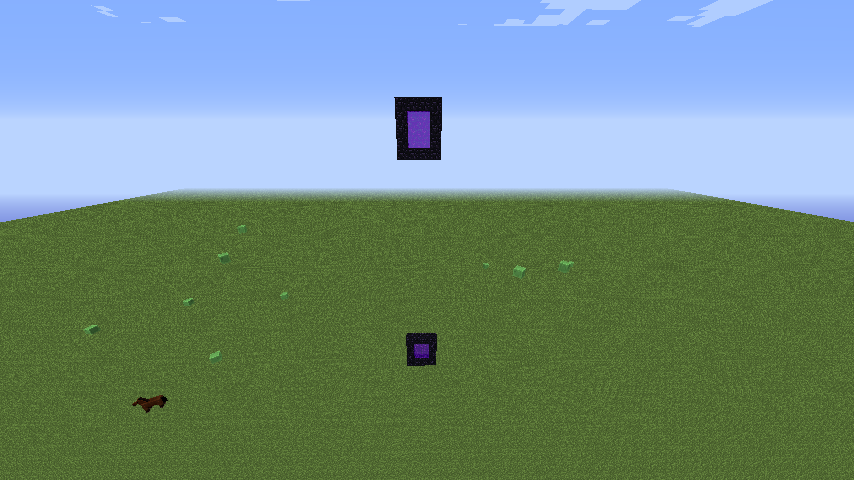 Then you must create a portal (in the nether) 25 blocks above the portal that you transferred to. Then light it and hop in. It should take you to the above portal in the overworld. It does for me ;)

Divide the height by 8 to get the amount of blocks you need to go to create the last enerportal in the nether.

26
How far away do portals need to be so that they don't go to the same place?
6
Creating an Overworld portal to a specific location in the Nether
4
Nether portals exiting into a different location
8
Nether portal (that has been used both ways) suddenly move
4
Why do two different portals drop me into the exact same Nether coordinates?
3
Why won't my portals link up properly?
3
Can I block creation of new Nether Portals in vanilla Minecraft?
1
Not able to link portals properly