How can I defeat a Remnant Architect?

In a small side quest that looked like pretty much all of the other side quest I was suddenly surprised by this thing: 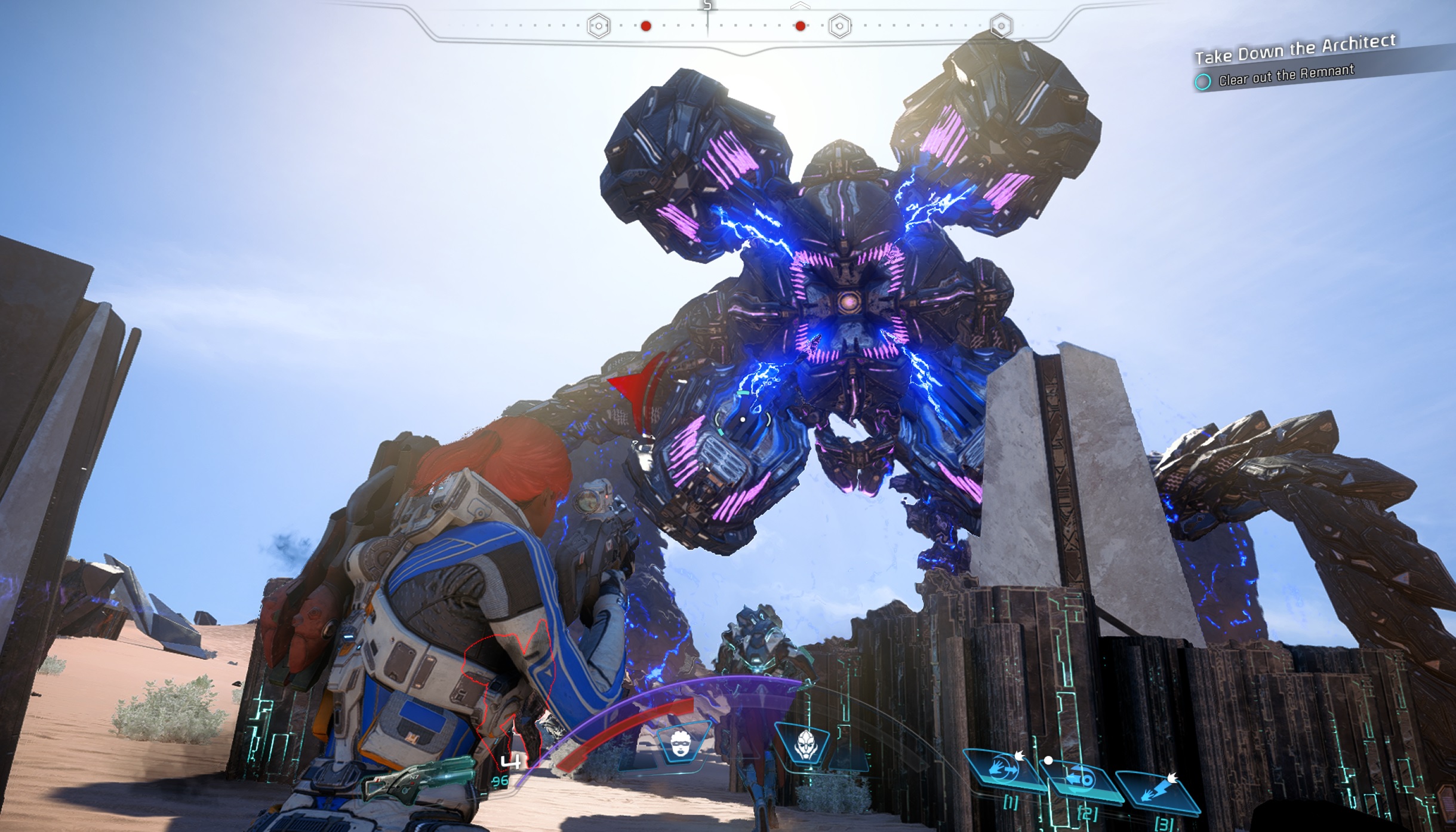 A Remnant Architect. It's quite an impressive sight, but unfortunately it's also pretty good at killing me.

Just staying behind cover doesn't seem to be a good strategy here, the architect's attack mostly seem to ignore cover. I specialized in biotics so far, but this is an enemy I can't pull and throw around, so my skills seem a bit suboptimal for this occasion.

Any tips on how to defeat this enemy?

I found that the encounter on Voeld was largely narrated by the comments from my squad mates.

If for some reason your companion selection isn't as helpful as mine was (I had Jaal who kept announcing what to shoot) then the encounter is basically a case of shoot the legs when they're exposed (when the plating rises exposing the red core), shoot the head when it's exposed (same as before and red), and killing the mobs that spawn during when the head of the architect opens up and shows purple (like in the screenshot in the question).

Each of these hit boxes is highlighted as "Conduit". After destroying each leg conduit the remnant will take off briefly and move to a new location nearby. Throughout the encounter the remnant will use some kind of death ray on you, this will highlight an area on the ground in a beam originating from the boss and will do massive damage after a short period of time.

On Voeld you need to keep moving between heat sources to stop the environment from beating you. Avoiding environmental factors may apply to encounters on other planets as well.

I've found these to be fairly easy, but I'm just playing on normal difficulty at this point.

When the head or leg conduits are visible, shoot them. It doesn't seem very important which gun you use, but I like to use big damage single-shot weapons like the Carnifex, especially on the head. Shooting directly into the red on the legs or the center of the head gives you a weak point bonus, like a head shot. You can use your powers and combos on them as well. I found that, despite not actually lifting the conduit, Pull / Throw works to set off combos, although it doesn't stay primed for long. I was able to defeat the architect on Elaaden using only Pull, Throw, and Energy Drain, without shooting at it.

If you continuously move in a circle around the architect, outside the legs, it will almost never hurt you at all. Whenever the big red attack is about to go off, just evade in the direction you're already circling and it will miss. If you switch directions to try to go back, you'll end up walking into its targeting area, and probably into the nasty electric field it leaves behind. The biotic blink from the Explorer perk moves you further than regular evades, and I've found that it moves me far enough I can usually switch direction without getting hit. It also makes it easier to continue circling in cluttered areas without taking your eyes off the architect.

This can be complicated by environmental concerns, like the cold on Voeld.

When the conduits aren't visible, kill the Remnant it spawned. This is a good time to look for ammo, restore your life support, or get back into good position for another strafing run when the Remnant are dead.

If it flies away, chase it, but try not to end up directly under it when it lands. That can be painful.

You need to keep moving left and right between cover. Cover won't help you against his big attack. All you can do is get out of the way.

Best way to take it down is with a sniper rifle so you don't have to get too close. Take out a leg, shoot at it's mouth, dodge dodge dodge, repeat.

On Eos, make constant use of the Forward base nearby to heal and reload ammo. The one on Voeld is even harder because there's no Forward base and you have to constantly watch your life support as well. But there are buildings you can hide in to recharge.

I luckily had an assault rifle that I crafted with the "Vintage Heat Sink" augmentation for the Architect on Voeld. This augmentation makes the weapon work like weapons did in ME1, infinite ammo but overheats if clip is emptied. If you have this augmentation I highly suggest crafting it into a weapon when taking on an Architect on a planet where life support will be draining, one less thing to worry about.

Setting up primer-detonator combos is super helpful. Invest a point or two into a primer skill (Incinerate, Annihilation, Singularity) and use Throw to detonate it. I used Incinerate followed by Charge. As for allies, I think Peebee's Invasion skill is the only one that can be detonated (never tried it myself so can't say for sure) which can help if she uses it.

Use Incendiary Ammo, it may not do a large amount of damage but it's better than nothing.

4
How can I add an augment to my weapon?
12
Can I safely sell salvage items?
7
How can I defeat a Cardinal and their orb?
14
Can I stash my items somewhere?
3
How can I rank up weapons in the single player campaign?
5
How do I settle Havarl?
10
Who can you romance in Mass Effect: Andromeda?
6
Can I respec my Ryder?
4
Can I change the color of my lips?