What do all weapon augment modifiers do?

There seems to be a lot of augments that modify the ammo of the weapon to things like electricity, plasma, plasma seeking, etc. What exactly are their bonuses and drawbacks?

This article on GamePedia lists all of the in game text describing each ability.

These are fairly self explanatory in most cases and it's obvious what the augmentation does from the text on the item however there are a handful of these augments that change the "weapon fire type" - completely changing the handling and impact of the weapon you've augmented and based on your comments on the deleted post I think these are the descriptions you're after.

Essentially in all instances you're trading effective weapon damage for utility, and the damage trade off makes this utility situational at best in my opinion.

Plasma Charge System changes your weapon fire type to fire small balls of plasma that arc over distance and explode for a small AOE effect on impact.

This augmentation will reduce single shot damage from a shotgun per hit, relying on their new weapon-fire type to provide a situational use. In this instance, the situational use is the ability to fire over cover (or through cover, since the AOE effect seems to be force damage), hit multiple enemies at once with what would have formally been a single target weapon, shoot the ground, etc.

I have found this augmentation especially useful at clearing out corridors on Kett ships, just from spamming blindly around the corner due to the area effect.

These augmentation will reduce single shot damage from a shotgun per hit, relying on their new weapon-fire type to provide a situational use for each augmentation.

Seeking Plasma System is the same sort of plasma as in "plasma charge system", but now the bolts will semi-reliably seek targets.

Beam Emitter changes your rapid fire weapon to fire a continuous beam, turning it into a damage over time energy weapon. This will increase the weapons damage against armored targets but reduce damage against all other enemy types. Much better used on a weapon with a large clip size.

A single shot weapon will shoot normal projectiles, so if you're going to use this augmentation you'll probably want to pair it up with a rapid fire weapon or a burst weapon fire-type augmentation. 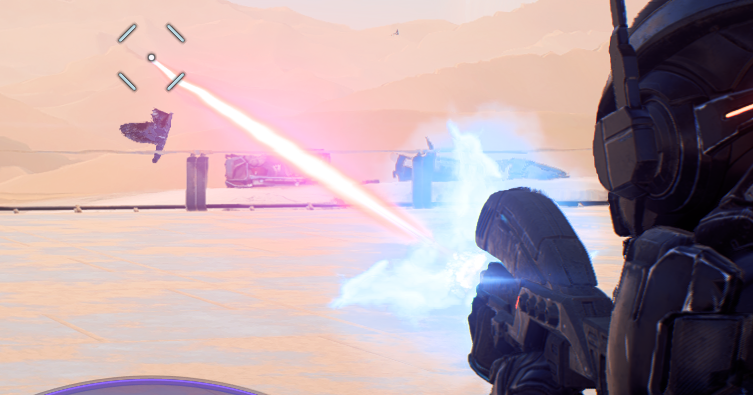 Ricochet System gives each projectile fired the chance to ricochet off any flat surface it hits. This mod does not reduce the damage of the weapon.

Still can find great utility out of some of these- Try a Widow or Isharay sniper with Heat Sink and Grenade Launcher augments and you'll be very happy with the AOE you can dish out. The best combo I've found is the Soned Assault rifle (basically a Gatling gun) with the Plasma Seeking augment and a Heat sink- it makes the bullets hit for a little less but the seeking augment on a Gatling gun gives you almost 100% accuracy.

Not the answer you're looking for? Browse other questions tagged mass-effect-andromeda .

3
What happens if you put a beam augment onto a sniper rifle?

4
How can I add an augment to my weapon?
12
Can I safely sell salvage items?
7
How can I defeat a Cardinal and their orb?
4
What are the details for Strike Team Mission "traits"?
7
Which powers are affected by increased "Restoration and Defense"?
2
Developing Higher Rank Weapons
1
During the mission "Hunting the Archon", what is the impact of choosing to save the Salarians over the Krogan?
13
Are there any points of no return?
2
What blueprints become available during story?
3
What happens if you put a beam augment onto a sniper rifle?