How to solve the puzzle in the sunken ship?

Spoiler Warning: This is a puzzle late in the game and I'll discuss the mechanics of the puzzle here.

I'm stuck on one puzzle in The Witness, in the sunken ship: 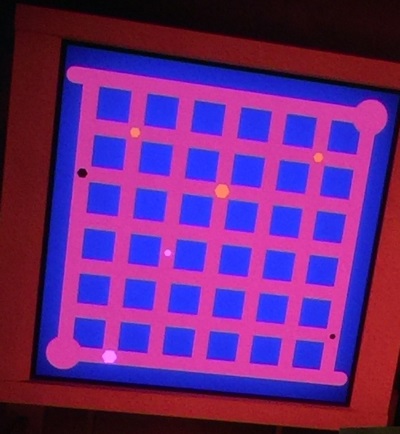 When I listen to the sounds in the background, I frequently hear water-drop like sound which repeats "Low-High-Mid" over and over. There is also a sound kind of like a harp strumming (that's the best description I can come up with) which has a very fast "High-Mid-Low" pattern, and there is a low horn sound which seems to just have one pitch but die off in volume.

I had thought each color would represent one sound, but no color has all three pitches. I've tried every variation I can think of to solve L-H-M or H-M-L, and solving it with the active line and the ghost line but I can't seem to solve it. I've even tried recording it and looking at the spectral image in Audacity but it's not helping me.

Here is my super high-tech analysis in Audacity: 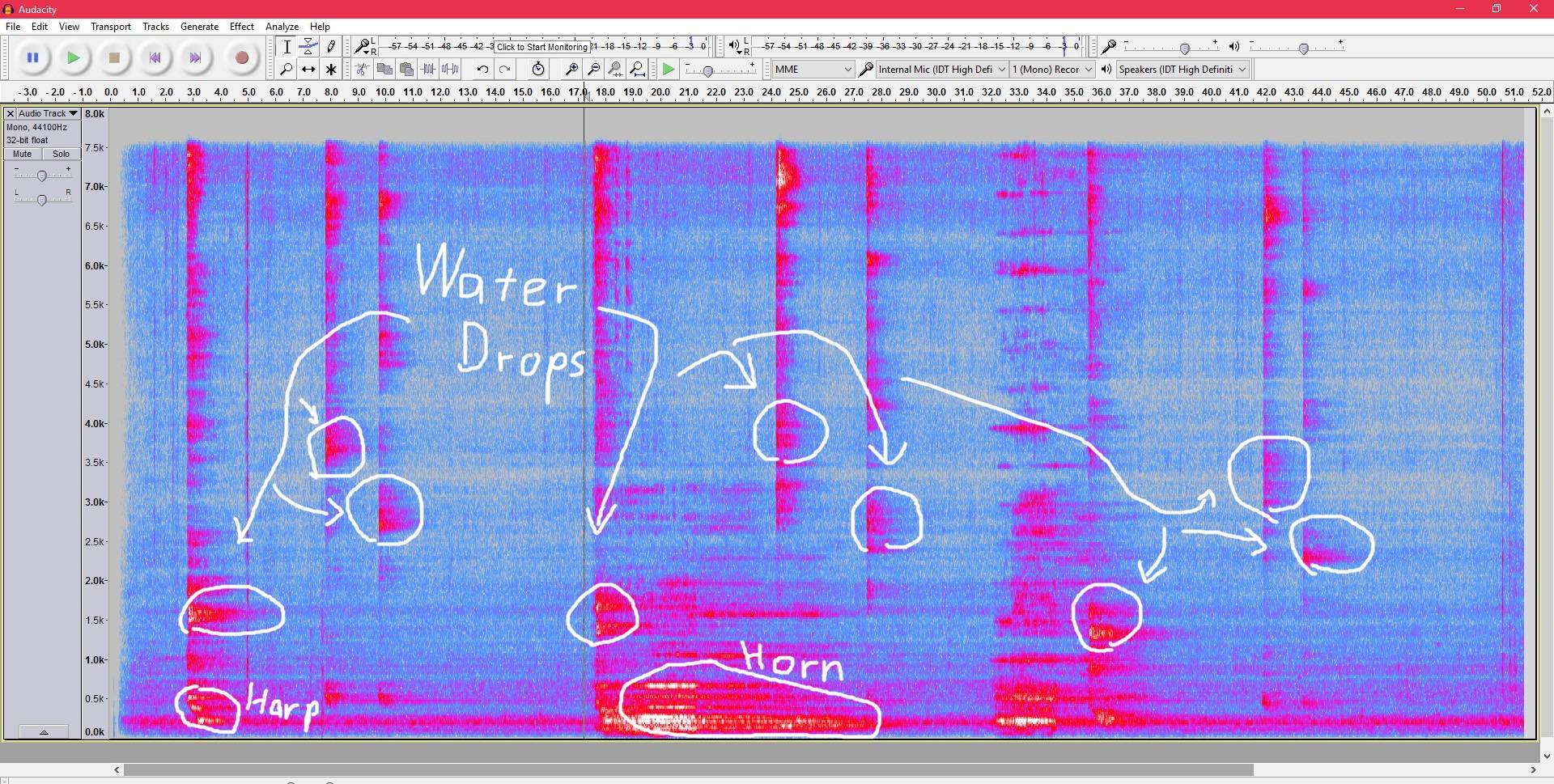 In my opinion, this is by far the hardest puzzle on the island, and it's only one of two or three where I needed some help when I played the game. You already made it further than I did at the time. :)

There is a fairly thorough guide on Steam for this puzzle, however it's more like an analysis of the puzzle which spoils the puzzle completely. Instead, I'll try to present the solution in a series of hints (in spoilers), in case you want to figure out the latter parts for yourself. The final solution is at the bottom of the answer, of course.

You already know this one, but in case some future reader didn't pick it up in the question: why does the line not move freely? Why are there two entry points?

In case you're trying to figure out where you've seen pink, orange and black before, maybe have a look at the immediate environment. Are those the specific colours you should be looking for?

There is a red lamp illuminating the door. Are you familiar with the colour theory puzzles yet?

Indeed, on symmetry island we can find such puzzles with a blue and a yellow line, where the yellow line vanishes more and more. In these, the blue line picks up the blue dots, the yellow line picks up the yellow dots, and the black dots can be picked up by either line. Honestly, I think the hint with the red lamp is much harder to get than simply to make the leap "oh this is a symmetry puzzle with two different colours and black, I know what to do with these", but figuring it out does tell you which of the two lines will be the active line. On to the sounds: I'm not sure how to phrase this as a hint, but there are only two relevant sound sequences, not three. One of them is pretty hard to pick up on because it takes a long time to cycle through.

The two pitch sequences are a) the dripping water which you've correctly recognised as Low-High-Mid, and b) the creaking of the ship, which is a very slow loop of four sounds and goes Mid-Low-Mid-High. You'll find that we have two small, three medium and two big dots, so that works out. But now if there are only two sequences, we can't map them to three colours, right? What could they be mapped to instead?

Instead, each sequence corresponds to one of the lines. Hence, the black dots can be used for either sequence, and we either have orange (pink) for dripping (creaking) or the other way round. It's easy enough to figure out which is which from here.

Now that you know which line covers which sequence, it's mostly a matter of finding a symmetric path such that both lines collect the dots in the right order. Pen and paper might help here. The next spoiler block contains the final solution. 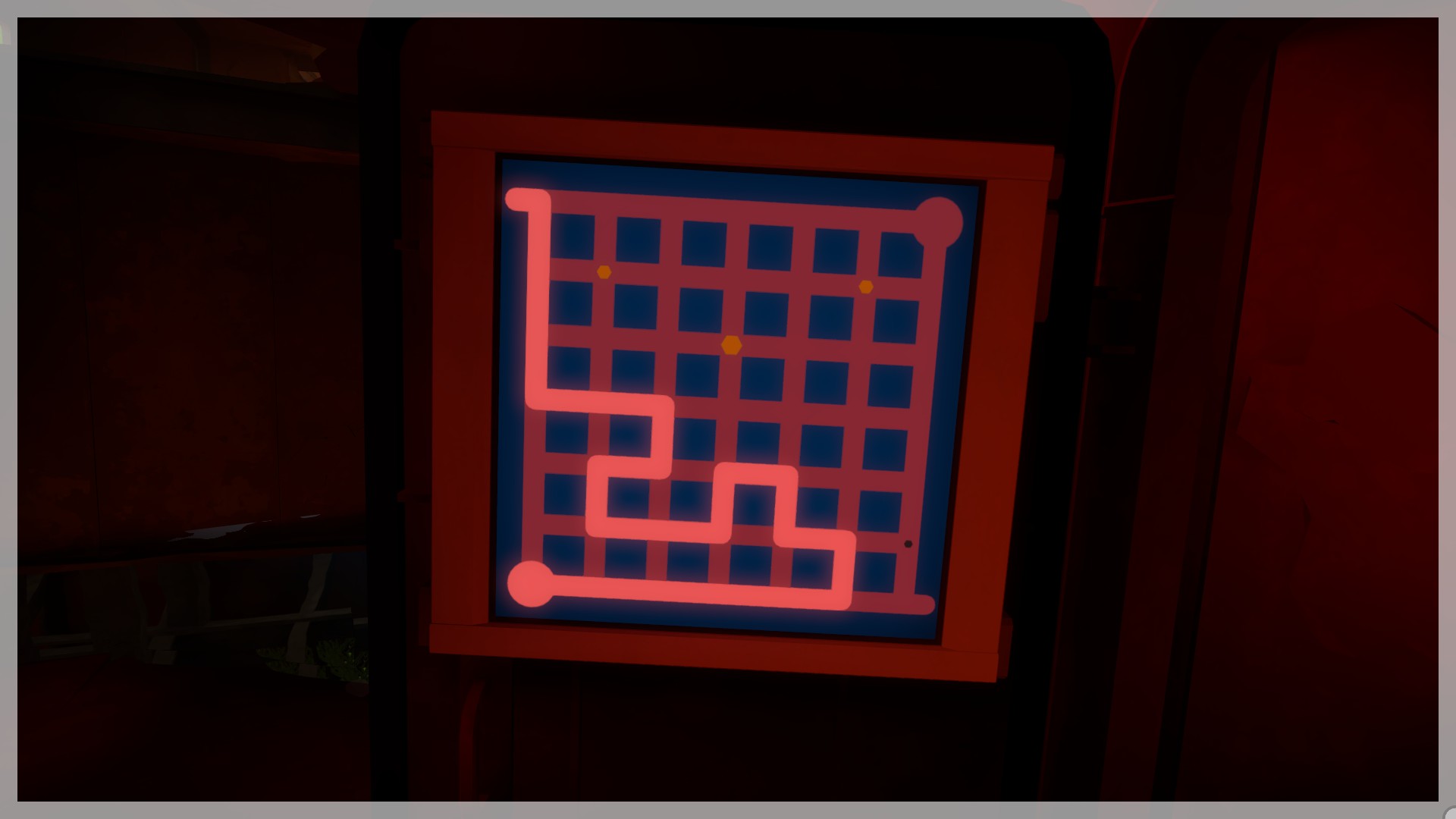 Source: the Steam guide mentioned above

Here's the raw image of a portion of sound I've captured (sorry I didn't know how to merge to one channel): 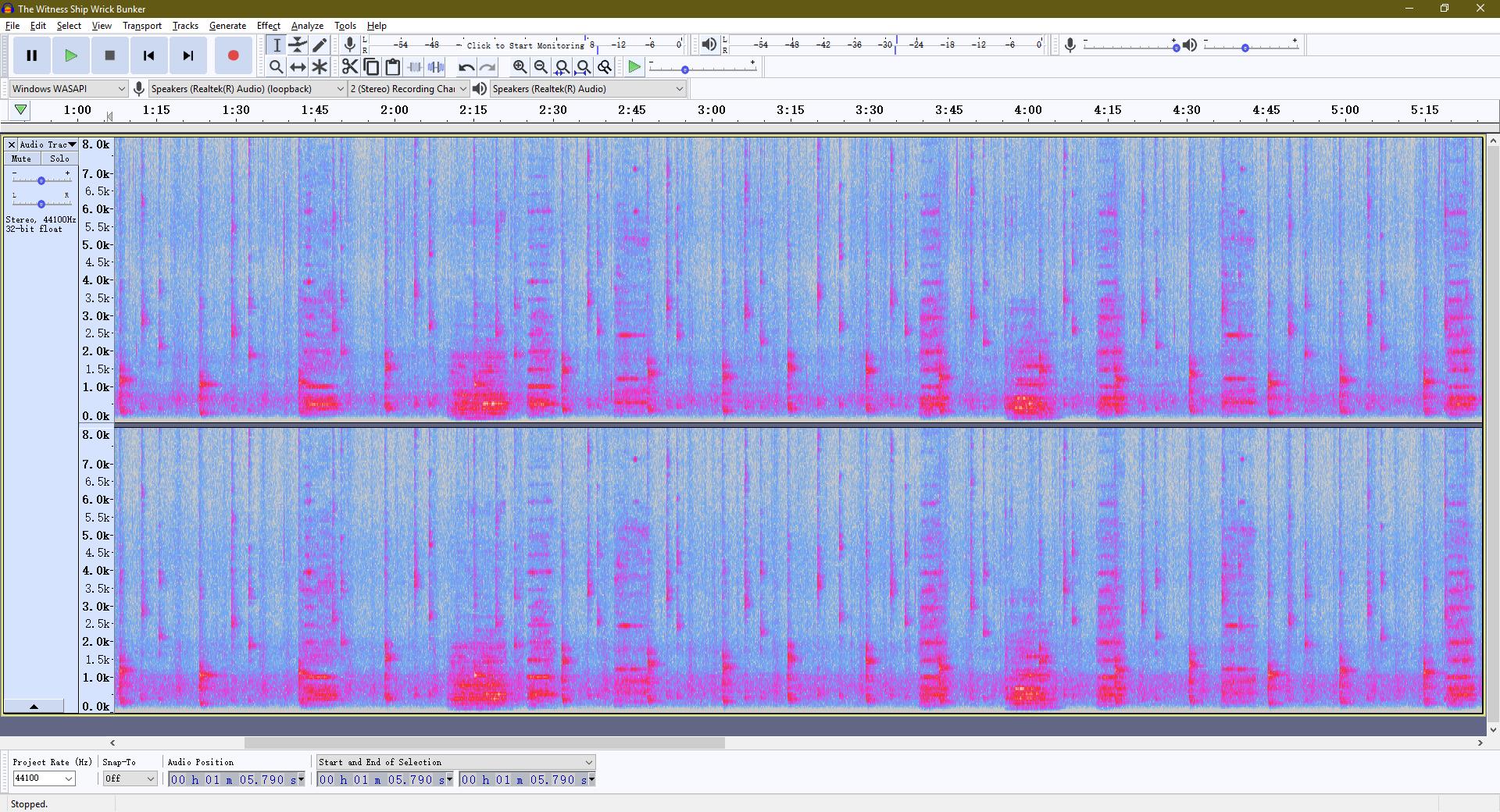 Here's the same image with marks and labels added: 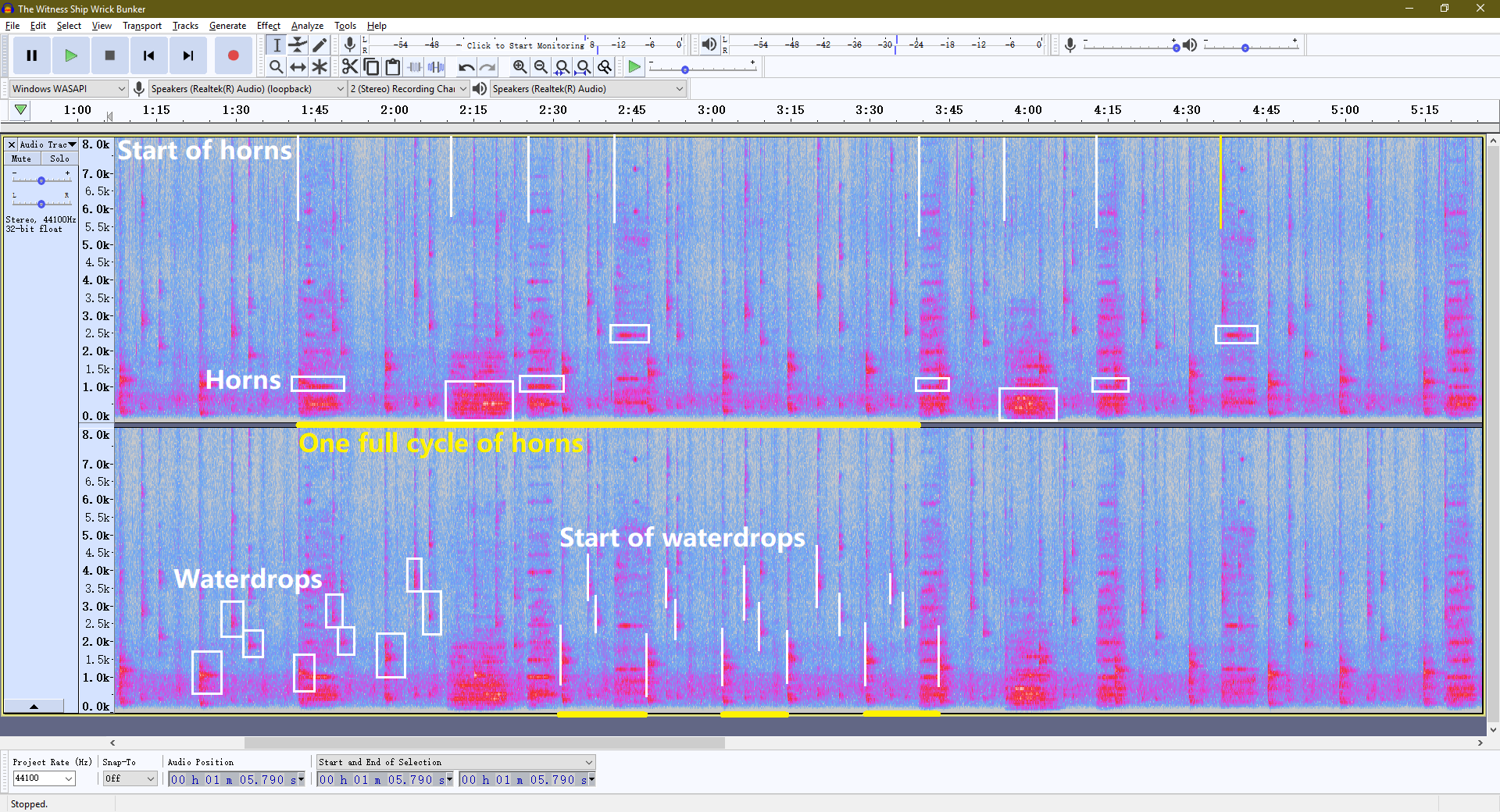 Stuff in the processed image should be very obvious. If not,

The image contains more than 2 full horn sequences. As marked with white squares in the upper part, a horn sequence contains 4 sounds in the order of M-L-M-H. Even if you're unsure where the break is by listening to the sound in game, you should be able to idenfity the long gap between the high horn and the middle horn (its length varies from 35 seconds to 50 seconds, compared to a maximum of 24 seconds for gaps between sounds in the same sequence). For the waterdrops, I marked 3 full sequences with squares and 5 full sequences (and the first drop of the next sequence) with vertical lines. Looking at the lines, the longer break is also easily identified in the first 2 sequences that are marked with lines (not squares).

The rest is already covered in Martin Ender's spoiler tags so there's no need for me to repeat them.

You can download the part of the audio that's inside the view of the image here. (File size alert!)

P.S. Audacity is a good software utility for this game :)

15
The Witness: Reformulate sound puzzles for a deaf person

6
What happens when you solve the second Maze/Tower puzzle?
3
Why is this solution to the mountain 'puzzle-in-a-puzzle' incorrect?
10
Tetris puzzle in the marsh with no use?
15
The Witness: Reformulate sound puzzles for a deaf person
7
Do you have to play The Witness twice to solve the last puzzle?
5
How do I solve this water reflection puzzle in the Desert Ruins?
1
How do I solve this puzzle in The Challenge?
4
Explaining the solution for this treetop area puzzle