What is Zelda's Legend?

The title that Nintendo chose for the series has led to a lot of confusion, even now, with people still confusing Zelda and Link. Basically, through the long and short of it, the primary focus of every game is on Link, so the title does seem a little off, but "Legend of Link" doesn't quite have the same ring to it (not to mention the confusion of "LoL" and "lol" - they somehow preempted that by 30 years!)

But, Zelda is just as much an important character in the series as Link, and even Ganon (or Ganondorf), so does the title link itself* to more than just a character? What is Zelda's Legend?

The first The Legend of Zelda game was focused on rescuing Zelda from the clutches of Gannon, as his name was originally spelt. The decision to name the game after the princess instead of the player is probably due in large part to the ability to pick your own name. The argument over many years for Link to have no voice was that the player is meant to feel like they aren't controlling another character, but instead are a part of the game.

In the immediate sequel they dropped "The Legend" and opted for Zelda II: The Adventure of Link. This sequel wasn't as well received, so as they continued with the series perhaps it was a marketing decision to draw the attention of fans of the original.

As for what The Legend is, you have to look at the first game in the timeline, The Legend of Zelda: Skyward Sword. In that game this Zelda is not a princess, but the first human/mortal reincarnation of the goddess Hylia. This is further explained at the back of the Hyrule Historia book in a translated manga titled The Legend is Born, a page of which I have taken a photo of. 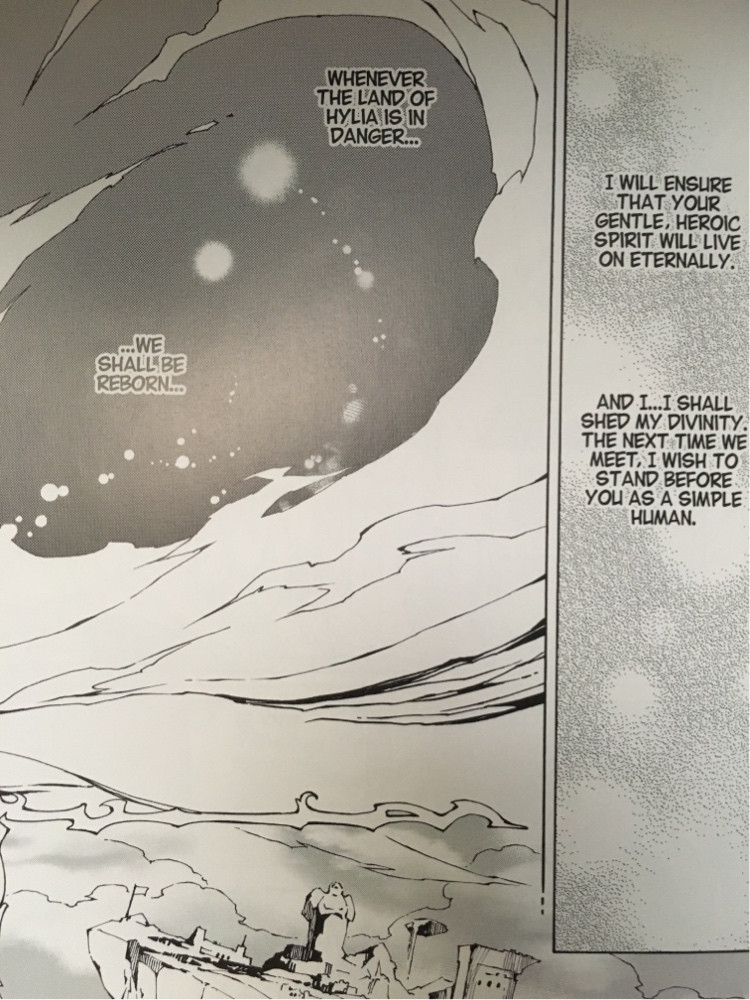 Long story short: Zelda is the reincarnation of Hylia, the goddess of the world seen in the games. Link, while important, is a creation of Hylia, not a god himself.

There really is an in-universe "Legend of Zelda", mentioned in the instruction manual of Zelda II as told by Impa:

"Link, the time has come when I must tell you the legend of Zelda handed down in Hyrule. It is said that long ago, when Hyrule was one country, a great ruler maintained the peace in Hyrule using the Triforce. However, the king too was a child of man and he died. Then, the prince of the kingdom should have become king and inherited everything, but he could inherit the Triforce only in part. The prince searched everywhere for the missing parts, but could not find them."

"Then, a magician close to the king brought him some unexpected news. Before he died, the king had said something about the Triforce to only the younger sister of the prince, Princess Zelda. The prince immediately questioned the princess, but she wouldn't tell him anything. After the prince, the magician threatened to put the princess into an eternal sleep if she did not talk, but even still, she said nothing."

"In his anger, the magician tried to cast a magic spell on the princess. The surprised prince tried to stop him, but the magician fought off the prince and went on chanting the spell. Then, when the spell was finally cast, Princess Zelda fell on that spot and entered a sleep from which she might never awake. At the same time, the magician also fell down and breathed his last."

"In his grief, the prince placed the princess in this room. He hoped that someday she would come back to life. So that this tragedy would never be forgotten, he ordered that every female child born into the royal household shall be given the name Zelda."

And although Zelda II may be one of the lesser-popular entries of the series today & did sell less than the original, it was actually fairly well-received in its day, and remained in Nintendo Power's Top 30 & Players' Picks lists for a good five years: https://imgur.com/a/uUNi9

This was found within the initial game: 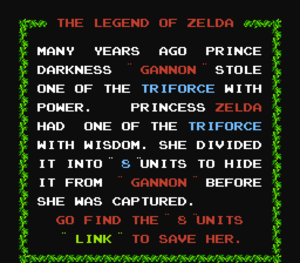 
You could say that the title at the top of this screen represented the name of the game, but I always thought of this text as the simplified, summarized version of the legend.

A long, long time ago the World was in an age of Chaos. In the middle of this chaos, in a little kingdom in the land of Hyrule, a legend was being handed down from generation to generation, the legend of the 'Triforce'; golden triangles possessing mystical powers.

One day, an evil army attacked this peaceful little kingdom and stole the Triforce of Power. This army was led by Gannon, the powerful Prince of Darkness who sought to plunge the World into fear and darkness under his rule. Fearing his wicked rule, Zelda, the princess of this kingdom, split up the Triforce of Wisdom into eight fragments and hid them throughout the realm to save the last remaining Triforce from the clutches of the evil Ganon. At the same time, she commanded her most trustworthy nursemaid, Impa, to secretly escape into the land and go find a man with enough courage to destroy the evil Gannon. Upon hearing this, Ganon grew angry, imprisoned the princess, and sent out a party in search of Impa.

Braving forests and mountains, Impa fled for her life from her pursuers. As she reached the very limit of her energy she found herself surrounded by Gannon’s evil henchmen. Cornered! What could she do? … But wait!

All was not lost. A young lad appeared. He skillfully drove off Ganon’s henchmen, and saved Impa from a fate worse than death. His name was Link. During his travels he had come across Impa and Ganon’s henchmen. Impa told Link the whole story of the princess Zelda and the evil Ganon. Burning with a sense of justice, Link resolved to save Zelda, but Ganon was a powerful opponent. He held the Triforce of Power. And so, in order to fight off Ganon, Link had to bring the scattered eight fragments of the Triforce of Wisdom together to rebuild the mystical Triangle.

If he couldn't do this, there would be no chance Link could fight his way into Death Mountain where Ganon lived. Can Link really destroy Ganon and save the Princess Zelda? Only your skill can answer that question. Good luck. Use the Triforce wisely.

(Text found from Zelda.Wikia.com: The Legend of Zelda: Prologue.)

That story came from a couple of pages from the manual, where this story appeared on top of a drawing of the land of Hyrule:

Edit: I decided that people may enjoy me providing a convenient hyperlink to the actual introduction sequence in action, where the summarized text is shown in the actual cartridge. If you'd like to gaze upon this, see: 15 seconds into The Legend of Zelda Intro (video on Youtube)

Not the answer you're looking for? Browse other questions tagged legend-of-zelda-series .

1
What do Rupoors do?
2
What other heroes are from the Hylian race?
32
Which Legend of Zelda game does this Link with the white cap belong to?
14
What created Dark Link, and what is his purpose?
4
What wishes have been made upon the Triforce?
6
What is the difference between the LoZ songs "Lost Woods" and "Saria's Song"?
10
Do Ganondorf's Steed, and Zelda's Steed have names?