How to make a simple portable rapid piston toggler?

I plan to bury an ocean monument under sand.

To do this, I'll need a simple mechanism of a piston toggling fast, as I drop new sand blocks as it pushes them away, that way I get up to 12 blocks long, full ocean depth strip filled with sand. Then move the piston and its mechanism, and fill another strip, and another...

The part I need is clocking the piston to keep moving. Doesn't need to be elaborate - just the opposite, should be as simple as possible, to reduce the work needed moving the mechanism, and milk consumption (due to "mining fatigue under which I'll likely work.)

So - what simplest redstone circuit will make the piston toggle pretty fast?

(extra requirement, at least early on: circuit doesn't extend downwards below the piston; there will be water beneath the initial surface isle, the "block under lillypad" trick used to create the first "stepping stone", and a bucket of lava to expand it rapidly into a small floating isle. So the circuit may be flat or go up or sideways, but not down).

I recommend a comparator clock. Simple to build. Faster then observer clock. 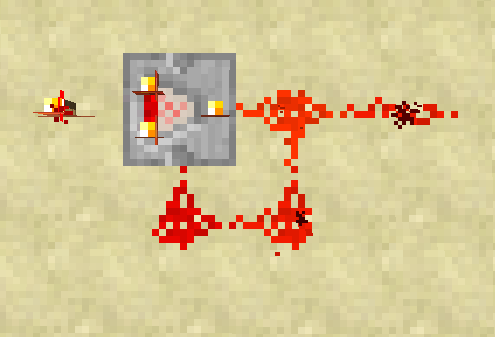 Make sure comparator is in subtraction mode. (Right click it to turn on front torch)

Edit: I just remembered, that clock is actually too fast for piston to cycle. Have to add a repeater to slow it one tick.

You can also slow clock more by adjusting repeater.

With repeater, clock rate will now be the same as an observer clock so I would use whichever is easiest to acquire.

3
How do you make the most compact rapid redstone pulser that never stops?
4
How can I make a functioning piston elevator in SMP
6
How do I make a piston go up and then down?
13
How does this rapid pulser work?
3
How can I make a reliable piston door?
3
Is it possible to make piston flying machine that bounces?
2
Is there a way to make a piston push any block in front of it, when that block is placed?