I was traveling from the Tabantha Stable to get the Sheikah tower in the region between that and Death Mountain (haven't explored this region yet). I attempted to cross a river and ended up landing on an island in the middle of it. From a map I found online, this island is called Mekar Island. 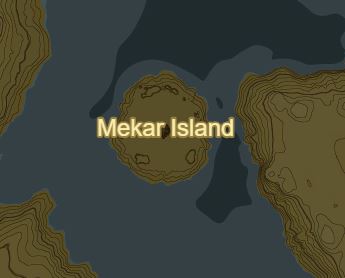 When I landed on the island, some Chuchus swarmed me...and that was it. There is a lone rock on the island next to a tall dead tree and an unlit campfire. I lifted the rock (no Korok Seed), found a Flint, lit the fire and nothing happened. So I decided to leave the island and glided over to the other side. I started climbing the steep riverbank when the screen started to fade to white and I was teleported back to the island (Link then looked around kind of perplexed). I tried again using Revali's Gale to get even higher up and it teleported me mid glided.

I'm not sure if this is some sort of glitch because Link did look around confused like it he was programmed to do that, but I haven't found any sort of challenge on the island to complete or anyone else on the internet mentioning this same issue. I haven't tried to Fast Travel yet in case there is a challenge there also (don't want to make the trek back).

Anyone know what's going on?

30
Is there anything to do at Mekar Island?

8
Can't purchase more arrows
3
In the final fight with Ganon, can you leave?
30
Is there anything to do at Mekar Island?
5
How do I beat the Eventide Island trial?
11
If I leave something/drop it on the ground, how long will it stay there until it unspawns?
4
Can't identify this Breath of the Wild ability
5
How to find out where the Fang and Bone is?