I am crafting a pistol that has 4 slots. The first slot gives me all sorts of options for augmentations. Then I choose one augmentation, which then somehow limits myself to just ONE in any other slot. What's the deal there? 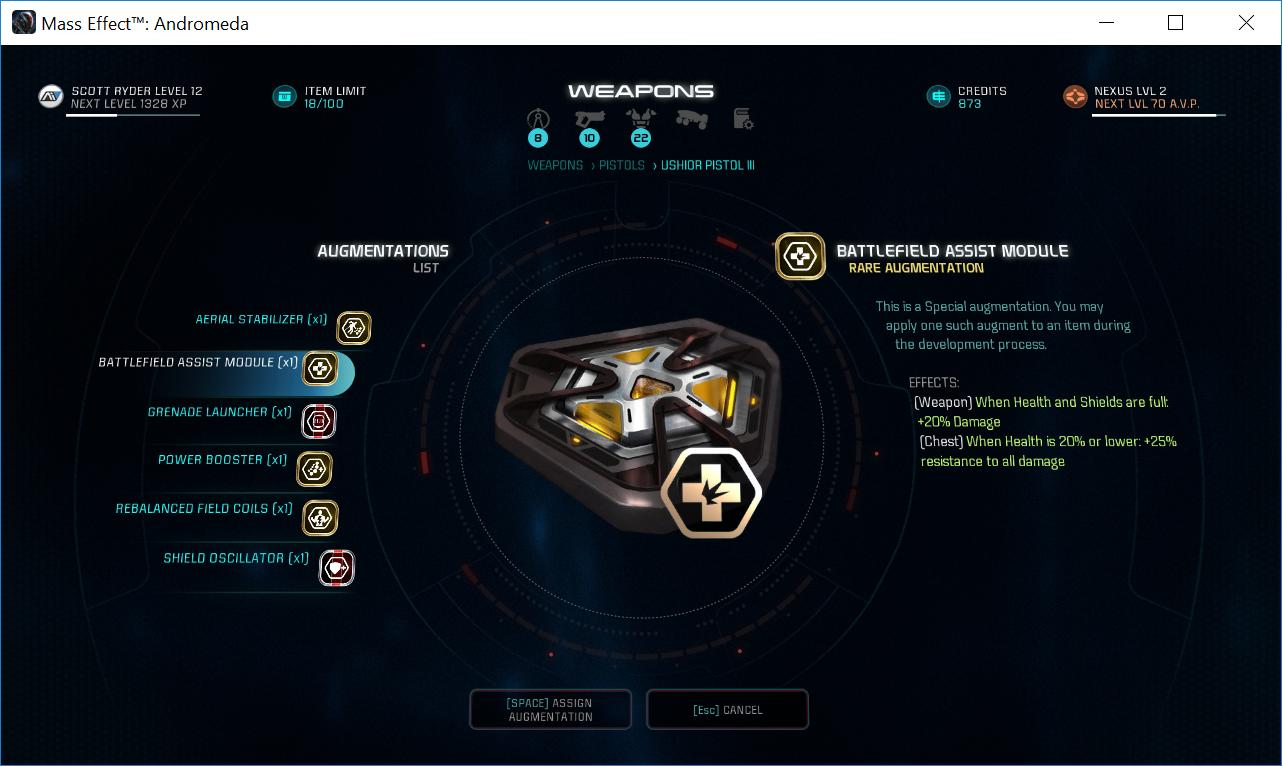 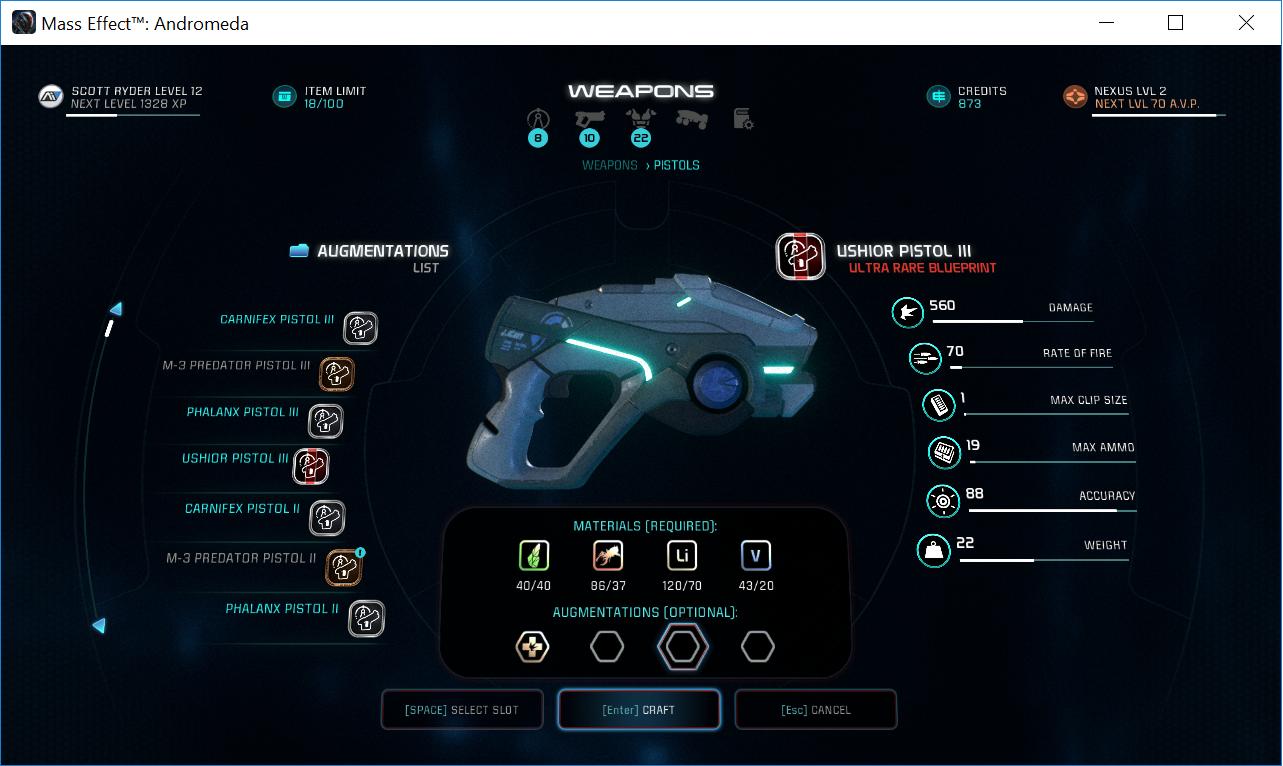 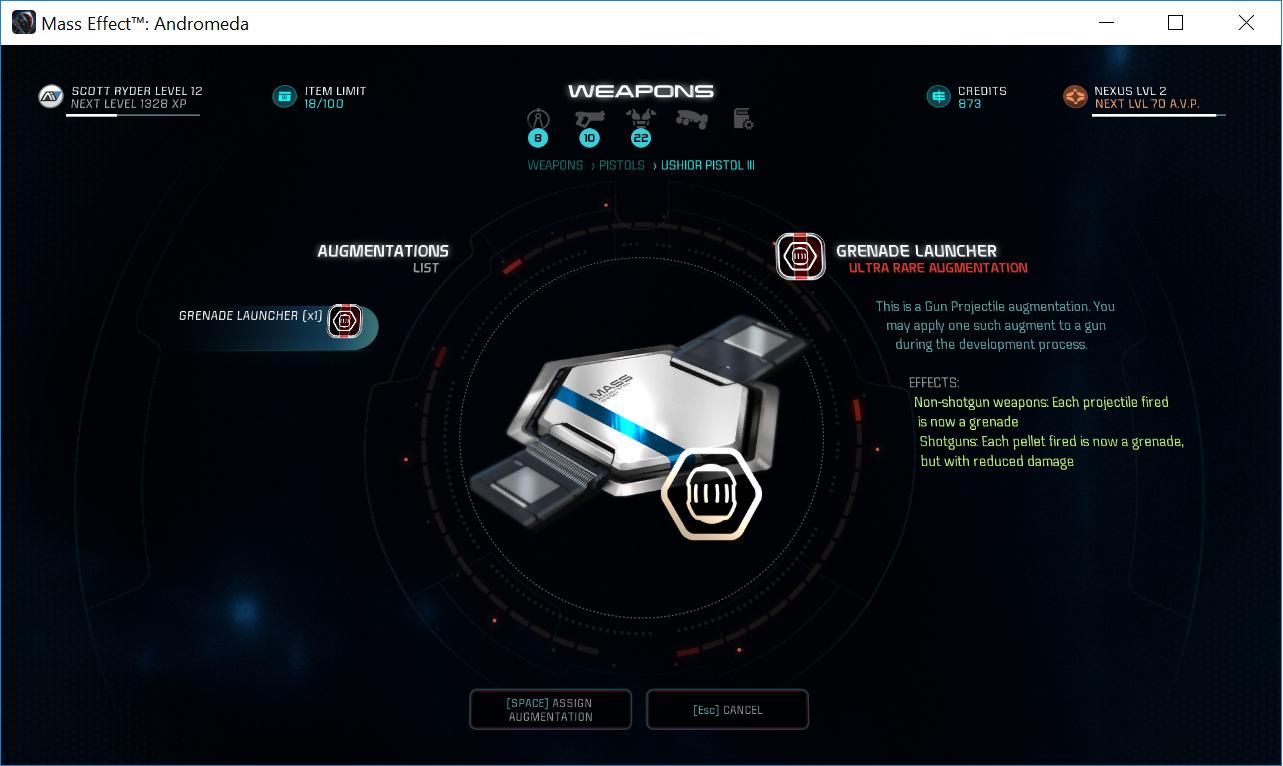 There are several categories of augmentations.

Can only be put on guns (obviously). Change the nature of how the gun operates by replacing its ammo with a different type, therefore, you can only apply on of them.

Can only be put on guns (obviously). Change the nature of the weapon by changing its behaviour, e.g. the Plasma charge system allows you to charge up the weapon for a big hit. You can only put one of those on the gun.

Those can be put on Guns, Chest Armor and a handful on Leg Armor. They do some special effect, e.g. the shield oscillator restores shields when a certain condition is met. The effect differs whether you put them on a weapon or armor. The augments which can go to the leg armor all affect your aerial melee attack. You can only put one of those on the item.

Those can be put on everything and provide a small bonus to your statistics, usually the bonus is stronger on guns. The one exception is the knietic coil, which can only be put on guns and chest armor and is probably the best general augmentation. There is no limit to how many you can put on an item. Also, unlike Lore Friendly states, you can put multiple of the same augmentation on an item. It's perfectly possible to create a chest armor with 5 kinetic coils.

The border denotes the rarity, but also gives a clue on the nature of the augmentation. General augmentations are always silver (uncommon), the others are always at least gold(rare).

What happens in your screenshot is, that you put Battlefield Assist onto your gun, which is a special augmentation. All other augmentations you have except for the Grenade launcher are special augs as well. Therefore, as you cannot put another of those into a second slot, they are no longer an option to choose from.

Some augmentations have a special type and your modding choices are limited to one augmentation per type. These are the ones you research. Once you research these special augmentations, it adds one quantity of it to your inventory, and they start dropping in battlefield loot.