Who is the statue in the opening stage of Mega Man X5 based on?

In the introduction stage of Mega Man X5, there is a statue that Sigma hides behind before attacking. 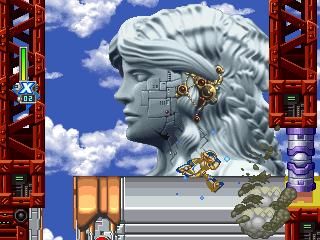 I'd like to know what this is a statue of. Whoever she is, she has an entire park dedicated to her and Sigma managed to have the statue of her built around him. The (unofficial) wiki doesn't get much more specific than just calling it "a statue" and the English name for the stage is only called "Statue Park." Further, I don't know of any female characters in the original Mega Man games that resemble this woman.