In version 0.15.0, Steam Turbines were added to the game. They are significantly more powerful than steam engines (1 steam turbine is equal to ~10.5 steam engines), but I'm finding it difficult to keep them running at 100% power.

To even reach the maximum available performance for steam turbines, you need to use nuclear power and heat exchangers. The heat exchangers use heat produced by the nuclear reactor to make steam at very high temperatures. From my observations, the exchangers need to be running at at least 500 °C to produce steam (the maximum is 1000 °C). Anything lower than 500 °C, and the turbines will not run. I've also noticed two things with nuclear power:

I'm able to get my turbines running at maximum efficiency when there is enough power on my grid already, but I am expanding my factory, and my expansion is starting to consume too much power. When this happens, the turbines fail to continue to run at maximum. They appear to consume their steam faster for some reason, and end up only being able to perform at about 60% their potential.

My setup includes two nuclear reactors that are connected with heat pipes and are always running to produce enough heat. Right now, the exchangers are in the 600+ °C range so I should have enough heat to be making steam. 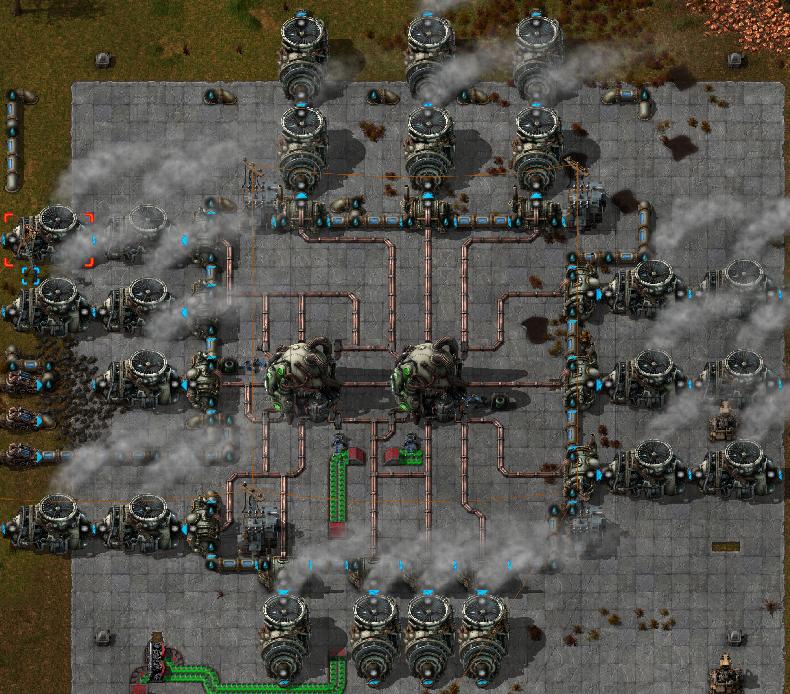 How can I always keep them running at maximum power? Better yet, steam turbines can be linked together like steam engines, but doing this almost always ruins the performance of the turbines. How can I do this as well?

It's hard to say where the bottleneck is because you haven't shown any of the mouseover info displays for the turbines, exchangers, and pipes, but here's some general advice:

steam turbines can be linked together like steam engines, but doing this almost always ruins the performance of the turbines.

This just means that you don't have enough steam in that pipe to feed that many turbines. The total output will always be the same or better — there are no losses in a heat/steam system, only flow bottlenecks.

This is an older question, but your 2nd steam turbines are always going to be limited because the heat exchanger only can create 10MW worth of steam - but each steam turbine is 5.8MW capacity. So the second turbine will always be limited to only 4.2MW production.

You can get around that by having more heat exchangers and a "shared" steam process between them.

4
How do I determine the actual amount of power my nuclear reactor can provide?