How to level up clerics fast?

I am having a lot of work trying to level up a new cleric I've put in my main team, and wondered if there is an effective way to level up clerics in a faster way.

The healing doesn't give much experience, and because of their low attack, it's hard to find an opponent that takes a decent amount of damage from them.

Are there any tips on leveling up clerics?

First, make sure to maximize the level of your castle. By upgrading your castle, you will get a bonus on experience every battle, up to a 100% bonus.

You may also have a ressource you are not using that much while it could help you a lot on your clerics progression: transparent shards and crystals:

When you use a shard on a character which level is lower or equal to 19, he will win 1 experience point. Crystals are working the same way, but on a character with a level superior or equal to 20. This can help you to get some quick levels on your clerics without even fighting. As these are kinda rare and long to collect though, make sure to use them only on the characters you want to maximize first.

For the battle phase itself, I usually try to find maps with bottlenecks part, such as maps with bridges: 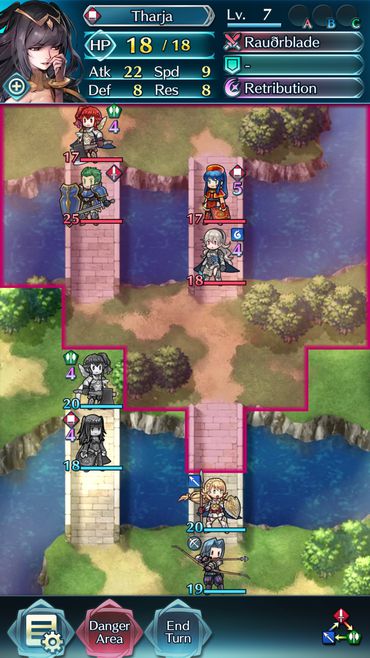 On those maps, I usually place a character which can't attack back an opponent in close combat, such as a mage or a bowman, and my healer behind. The character in front has to be resistant enough to not die, but still should be able to take damages from an opponent. I then wait for an opponent character to come attack this character, and I heal this same character for several turns. As you may have noticed, the experience won from healing decreases with each turn, but it will still allow you to gain a fair amount of experience, especially for the first levels. When the healing doesn't bring you any more experience, just attack the opponent until he dies, awarding you with a fair amount of experience.

When I am not on such a convenient map, I always try to adopt this strategy: one character protect my cleric in front and damage the opponent character without killing him, and my cleric then finish him to get the kill experience.

I don't think there is a specific faster way to evolve your clerics than to play on all those parameters. To sum up:

Isuka's tips are pretty good as far as farming experience goes, but for me they way I level clerics is just to bring them with any party.

Basically bringing a Lv20 swordsman (for example) with a party of Lv1 characters you are levelling up is pointless because they will kill everything easily and gain no experience.
However bringing a cleric that is significantly higher levelled than the rest of your party is fine as they gain the same amount of experience for healing lower levelled characters.

You can also do the reverse and bring a low level cleric with a high level party, but you need to be extra careful to protect them then. Most clerics tend to be quite squishy (though there are a couple who are veritable tanks) so you should be defending them anyway.

Unless you have an over abundance of clerics then just make sure you take one with every training mission you go on and they should level up to useful levels pretty quick.

The final thing to remember is that, other than defence (which ideally they shouldn't need as they generally avoid combat) and access to new skills via SP, clerics don't really improve much with levelling up; their main skill always heals the same amount what ever their level.

3
How can I change the heroes on my team?
15
How can I obtain more feathers?
6
How does the arena score work?
3
Is there a way to see the level 40 dialogue again?
2
How is the Hero Merit calculated?
2
How is the Tempest Trials bonus applied?
2
Is it worth unlocking potential only to merge?
3
How does Light Breath+ Refined work?
4
What can I do once I get some character to level 40 to enhance them?