When do assists show up in the kill feed?

I don't have the assist picture in the kill feed, so they're right in that regard, but I know I've been doing significant damage. So is there a time that you get an assist specifically? Does it only come up under certain circumstances? Or with a specific percentage of damage? 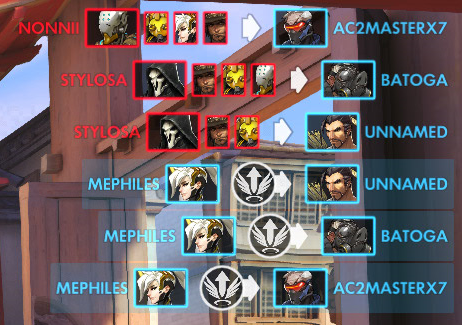 The new assist visual that shows up as of the new patches are for assists only, being a part of the kill (doing damage as you say you are) doesn't count as an assist, but rather an elimination. If you've done damage to an enemy recently and someone else finishes them off you get credit towards the elimination as an elimination, not an assist.

From the late May update:

Ways to get assists are through means such as recon via Hanzo or Widowmaker, or offensive/defensive assists via Zenyatta's orbs. Other ways include healing/buffing from Mercy or sleep darts from Ana.

5
How do I know if I got a kill assist in Overwatch?
5
Why do random red skulls sometimes appear for Mercy?

14
How can I show teammates health for Soldier:76?
7
When do the weekly brawls reset?
6
How do kill accolades work?
18
What are the differences between offensive and defensive assists?
9
What is a “High Energy” kill?
1
When exactly Genji climbs and when he stops climbing?
0
What phrases can show up when I type “gg ez” in chat?
6
Can Hanzo's Ultimate Arrow kill? (Not his DragonStrike)
3
When does the daily arcade playlist reset?
1
Does the new Symmetra main fire improve damage when “connecting” or when “firing”?