Should I attack a taunt, even if it won't kill it?

In Hearthstone often I have the choice of attacking with a minion against a taunt, but it will cause a loss. The alternative, just leaving the minion on the board and doing nothing, risks losing it to AOE or a spell. 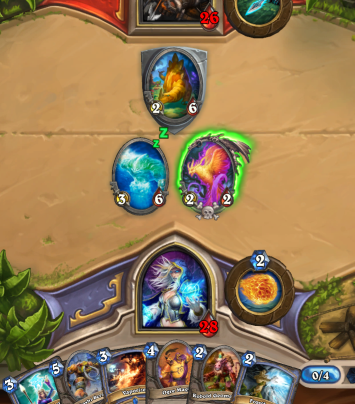 Above is a typical situation. I can attack the 2-6 Stegosaur with my Phoros. Then I might be able to kill it next turn by using the 3-6 Water Elemental and a Fire Blast. If I leave it on the board, I risk it getting killed by a multishot, but if he has no spell then it might be better to leave it.

Conclusion: I would leave it up. If your opponent trades into it, you have the same result as if you attacked it. If he doesn't, you can attack it with your frost elemental over two turns and leave your pyros alive.

Attacking into taunts really depends on the situation. You should attack a taunt:

You should not attack into a taunt when:

Generally, whether you trade with a minion or not really depends on the situation. In the situation of the post, I don't think you should trade because his stegadon will most likely trade into your pyros, which you can follow up with frostbolt + ping or Frost Elemental + ping

If you are new to Hearthstone and would like advice while you play, feel free to add me. My battletag is DragonHaert#1923 and I mostly play on NA. I've been playing since the release of the Grand Tournament and play many hours a day so I believe i could help you quite a bit and provide insights on game dynamics if you need it. :P

6
Which mind control effects allow you to attack?
21
What happens when taunt is put on a stealthed minion?
9
Dealing with 4 attack as Priest
2
What types of attacks and actions *must* target an enemy with taunt?
15
Can Shadow Word: Death kill a Spellbender minion?
4
When should I start playing Arena?
24
Can I swap weapons mid-attack?
1
What is the maximum attack a minion can have?
3
Hearthstone strategy problem, kill with hero ability or minion, secret involved?