How do I win the mock battle against the USS Republic?

I just started Star Trek: 25th Anniversary and apparently I'm so bad that I can't even win the mock battle against the USS Republic. After reading the manual closely, I figured out the controls and can last about 30 seconds in a battle with the Republic before being defeated. My methodology so far is:

Invariably what happens is that I'm chasing the Republic, then it turns to face me and unloads its weapons. I continue to unload my weapons (like the "Fire Everything!" scene in Wrath of Khan), but it seems they always destroy the Enterprise (or at least, that's what the simulation says).

I figure that if I can't beat the USS Republic in a mock battle, there's no way that I can beat the real enemies in the game. How do I beat it? Or is this supposed to be a Kobayashi Maru no-win scenario?

It is possible to beat the USS Republic in the initial battle, as shown in the following video at about 5:50...

There's no real secret to winning the battle that I can find, all of your tactics are correct, but there are a few others that can help in space combat (some of which you already noted, but I'll include them for posterity):

Screenshots are from the GOG.com version of the game, and from the digital official game materials included with that purchase

Use the radar to figure out where your opponent is. The shot below shows the Republic (green dot) at my six o'clock: 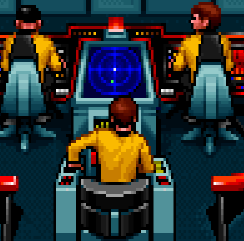 Spock can give you damage analysis on enemy ships, but it hides your own ship diagnostic information while it's active:

Speed up or slow down using the numeric keys as described below, in the official game manual: 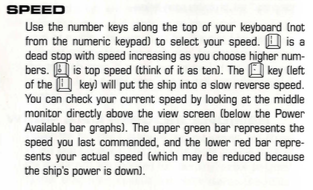 If you take damage, use the D key to pull up the "Repair" menu and tell Scotty to get to work:

Left to right, these are your shields, phasers, torpedos, sensors, bridge, hull, and engines (I guess warp and impulse are lumped together).

Monitor your shield and hull integrity using the diagrams on the left and right of the bridge. These can tell you which way to orient your ship so you can keep damaged areas away from enemy fire.

Not the answer you're looking for? Browse other questions tagged star-trek-25th-anniversary or ask your own question.