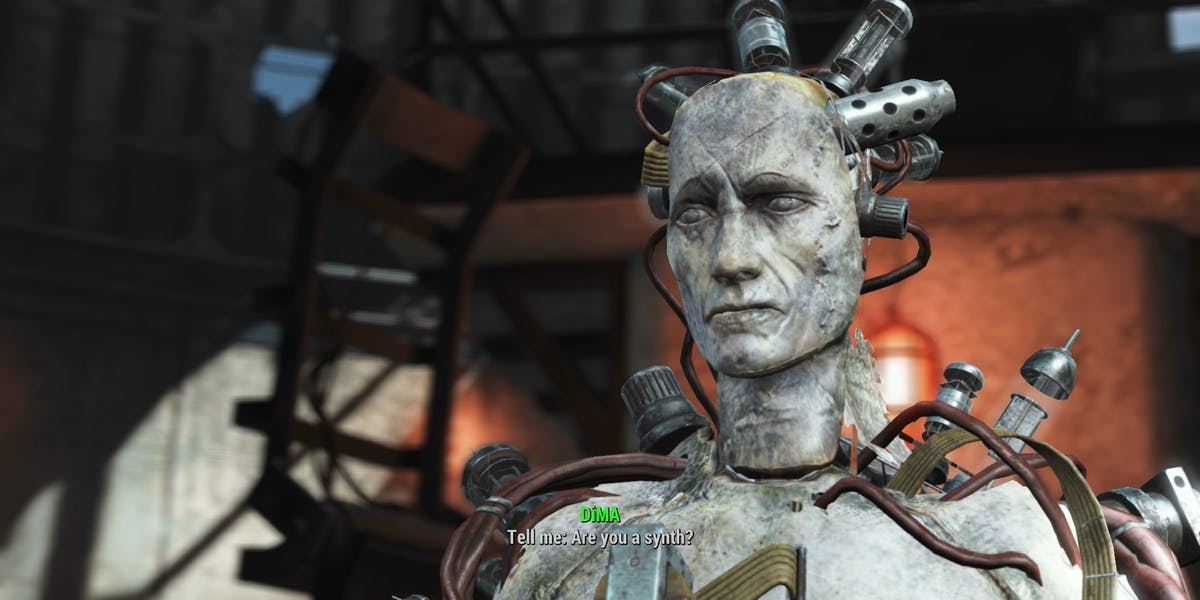 Is the player character in Fallout 4 a synth?

The game doesn't answers this question directly, as far as I know.

It would feel kinda like it makes sense, the Institute making Synths and you

as a Synth becoming the new leader of the Institute.

Is the player character in Fallout 4 a Synth? What evidence exists (either in-game or comments of developers) that support the answer?

In the Automatron DLC quest, Restoring Order, when you gain access to The Mechanist's lair, over the speaker you hear "incoming robot detected, opening security doors" (you have a robot with you during this quest) but then you hear "no bio signs detected, proceed".

That is the biggest piece of evidence I have seen to support the main character being a synth. The character was scanned and there were no traces of bio life. I didn't want to believe I was a synth either but that really opened my eyes to the idea. Hard proof.

Evidence for being a synth:

When talking about synths, he sure uses the word "remarkable" a lot.

This response is just me exploring the idea. I hadn't thought about it before. There's definitely evidence to back up the theory. And while it would be easy to say "there's no evidence that you're human, either!" - how could there be?

The fantastic journey of the player is not, to me, evidence that they are synth or human. The game stars them because if it starred a feral ghoul perma-locked in a shipping crate, it wouldn't be a very fun game. The game stars you because you're the hero of the story - so it's not evidence either way.

The biggest piece of evidence:

The hero accepting the "I kept you frozen because there wasn't a reason to let you out" line is like the synths in Westworld saying "It doesn't look like anything to me."

Here's one reason: because you survived the life support failure of every other pod, the Institute must have been monitoring your pod, or supplying it with power. If Father is really so emotionally disconnected (a concept his character seems to frequently not adhere to) then pressing the "thaw" button is less of a drain on Institute resources than supplying your pod with power. There's your tiny friggin' reason, sonny.

This is a cool topic to discuss, but i don't think he/she is a synth. Why? (SPOILER WARNING IF YOU HAVEN'T FINISHED THE GAME FOR SOME REASON)

Father could easily just reset you if you are going to betray the Institute, and second reason, in automatron dlc when you are scanned for not being a bio life.... Synth has that bio signs, why? Well father gave them dna and there is a bit of bio life in there, So i think ADA just did something or just stupid plot. Third, you can die from radiation, while synths are not able to. Fourth, when DiMA said what was your earliest memories, well...you were a veteran killing the chinese. Fifth you can actually relate about life before the bomb to ghouls who survived the bomb, like an old comic book series or commercials. Sixt the vault tech rep remembers you as he saw you before the bomb. I think the strongest reason you are not a synth is the vault tech rep, but you could argue father just made a replica of you and replicate your memories like what happend to nick when you "died", but remember that father could have just shut you down with your recall number if you are indeed a synths who is about to DESTROY the very "future" Of man kind

If you get heavily irradiated, you become a super mutant... robots can’t do that