How can I farm for Pirate Maps without a minion?

I'm trying to fight the pirate invasion, but I don't know a fast and easy way to get the Pirate Map without minions.

Here is a quick way to farm the ocean for drops. It takes advantage of artificial biomes by causing jungle monsters to spawn in the ocean, most notably Arapaima.

What you will need:

The block of ice above the structure was used to farm hallow and ice biome keys. It obviously isn't needed to farm pirate maps so disregard it. 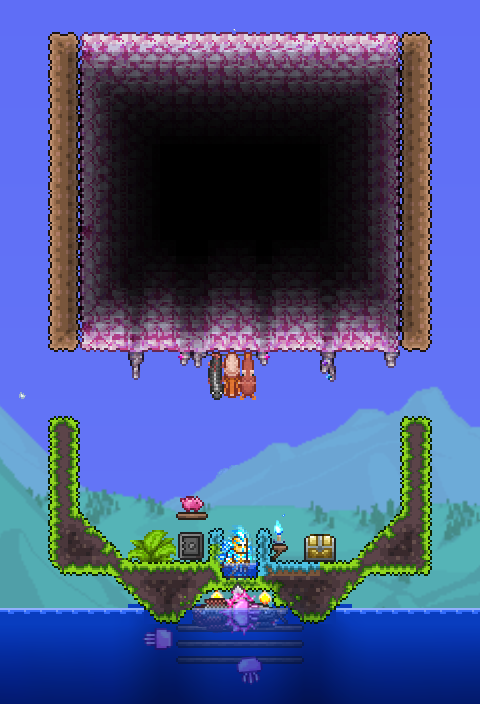 As for building it, the design doesn't have to match this one exactly but you will need a couple key features.

Obviously if you do not have a decent minion to help you, you'd have to do it yourself. AFAIK monsters from statues does not drop biomes loots such as the pirate map you need so that is not an option.

This is almost a given for hunting monster drops. The ocean itself is a good place to tap on since every tile of water can spawn ocean monsters and each have a chance to drop since it is already within the biome. To boost it further you can build a layer with solid blocks above the ocean with another biome, to that I recommend corruption.

The corruption spawns a few variant of flying monsters on the surface level. With spawn rate boost such as Water Candle and Battle Potion you'll find yourself be constantly swarmed with monsters. The map have a fixed drop for every kill within the ocean biome so there is no need to prioritise any monsters, just kill all of them.

Since you are to fight within the ocean biome, most of it is within the large body of water. Being able to freely move in the water will open a much larger area in which you can farm from, also allowing you to loot items dropped in the deeper parts of the ocean.

Minimally I will suggest Diving Gear but if you want to take it further and farm a Neptune's Shell it'll be even better. Having either will allow you to swim near the surface of the water between the extra biome you made and ocean, maximising the amount of area in which monsters can spawn.

If you are having trouble coping with two biomes of endless onslaught but still wish to maximise the farming efficiency, you can consider doing a few things:

3
In Terraria, what are the conditions to spawn a Goblin Army, and what time does it spawn?
1
How to play Terraria without Steam?
2
Can I mine Obsidian/Hellstone pre-Hardmode without getting Crimtane/Demonite Ore?
0
Is it possible to get a snowglobe from the Frost Legion?
9
How can I fight the wall of flesh without killing the guide?
2
Which are the specific conditions to get a pirate map to drop?
1
How do I break a Shadow Orb?
2
Can world events be ended early?