Ask Question
Asked 4 years, 10 months ago
Modified 1 year, 9 months ago
Viewed 3k times
2
This question already has answers here:
How can I check if my computer's powerful enough to run a certain game? (6 answers)
Closed 4 years ago.

I don't know if you here at Arquade SE accept technical questions, but I'm willing to try anyway.

I am a huge Dark Souls fan, so naturally, I have all three games on my laptop. Before we go into my problem, let me specify my laptop's "kind". I have a HP EliteBook 8760w. This puppy is sporting intel CORE i7 and Nvidia Quadro 3000M with 8 GB of RAM. I know that this is not a gaming laptop (it is a workstation, hence the Quadro dedicated graphics), so I naturally won't be able to get straight 60 FPS on 2016/2017 games like Dark Souls III for example. But recently, something strange occurred.

I just started playing Dark Souls II three weeks ago. I immediately noticed FANTASTIC performance. My frames never dropped below 30 FPS, and the average was around 45 to 50 FPS. At first I though this was due to my "Best Performance" option enabled, but then I reconfigured the settings to HIGHEST POSSIBLE: all best quality textures, Anti-Aliasing, depth of field etc. The performance stayed exactly the same. But when I play Dark Souls III (on lowest possible settings of course with "Best Performance" mode enabled), my performance is abominable. The average FPS is about 12 to 16, and the cap is 20. My main question is: Why on Earth does this happen? I'm dying to know the answer, as I am looking for ways to boost up my laptop performance to at least 30 FPS. I have three hypotheses:

I hope my question won't get immediately purged as off-topic just because it contaigns a technical issue. All remarks, criticisms and answers are welcome! Thank you in advance.

EDIT: One thing you might want to consider: a lot of people are telling me that Dark Souls II performs so well because it was made for previous gen consoles. Well, that was my initial thought as well, but then I compared it to the original Dark Souls: Prepare to Die Edition. Even this ancient (brilliant) game from 2011 has worse framerate than its 3-years-younger successor (I DO have DSFix installed to be fair) - Dark Souls II. I have a strong feeling that there is something special in Dark Souls II that makes my Quadro tick. Any ideas what this could be?

Since you're on a laptop, it is very possible that you are using the integrated gpu, rather than the much more powerful dedicated nvidia gpu.
You can change it in the nvidia control panel in the "Manage 3D settings" menu like this: 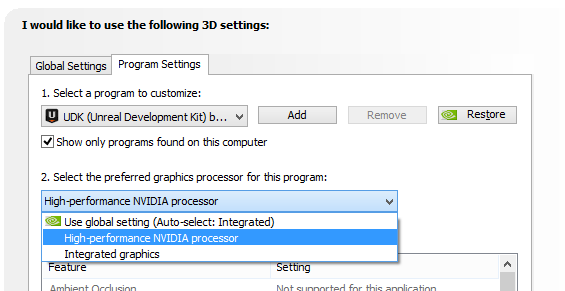 (Make sure you pick Dark Souls 3 in the drop-down list, or if it's not there - add the .exe manually by using the Add button.)

The system requirements for Dark Souls 2:

And for Dark Souls 3:

Note that these are minimum. The recommended are higher.

It's worth noting that the Nvidia 9600 GT is not near as powerful as the Radeon 5870 (The two "minimum" video cards for Dark Souls 2), so the game is probably better optimized for Nvidia cards.

Not the answer you're looking for? Browse other questions tagged dark-souls-2 dark-souls-3 framerate .

57
How can I check if my computer's powerful enough to run a certain game?