Use Glacial Shard on turn 1 or save for synergy?

In Hearthstone, one of my characters is an ice mage. I have two Cryomancers in the deck (+2/+2 if minion is frozen) plus 2 Glacial Shards, so there is considerable synergy between these cards. I frequently face the problem shown below: should I use a Glacial Shard on Turn 1 as an opener or save it for later synergy? 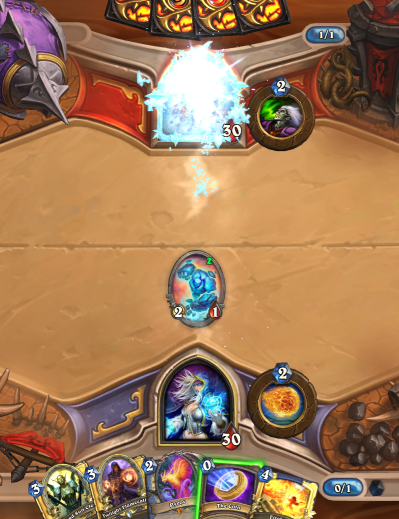 In the screenshot above, you can see I opted to use it in turn one. The freeze effect is wasted, but on the plus side, I have a minion out on turn 1, which puts pressure on my opponent. By using it now however, if one of my Cryomancers is drawn I will have no immediate way to get a +2/+2.

Generally, I'd say you should play the Glacial Shard if your opponent can't easily deal with it, or if you have plays for future turns. Playing it against Mage on turn one is often silly because they can hero power it without spending any cards; however, if you have a hand like the one in your picture, you should play it anyways. This way, the mage will spend their turn hero powering instead of playing a threat, which gives you the advantage when you drop your Pyros. If you're playing a class like Warlock, however, you should almost always play the one mana card. Their hero power can't kill your minion, so they will have to expend resources on it; even though Mortal Coil is a great play for them in this situation, they're still spending their mana on that instead of on developing.

In your current situation, you should ABSOLUTELY have played the Glacial Shard. You're facing a Warlock and you have plays for the following turns.