In Creative mode, do you have to find an End portal to get to the End?

I want to build something in the End in Creative, but how can I access it? Do I have to find an End portal to get to the end? or is there a way to simply go to the end? (Like a command line or something)

Same question could apply if you wanted to go to the nether, do you have to use your creative tools to build a nether portal and then go through, or is there an option to quickly change the world you're into?

PS: I currently am at work and can't try to simply build an end portal, but if I can remember right, if your end portal is not one made by the game, it won't work?

You can build an End portal. End portal blocks have either a north-south direction or a east-west direction. I know that it was once the case that you had to have the two correct (easiest by standing in the middle and building around you), but I don't know if that's still necessary.

The reason why I don't know it is because it's not necessary to do it. If you have access to commands, you can just type

and you're instantly in the End. But you should remember where you were when you executed that command, because it leaves an End portal block at that position. When you don't need it anymore, just break it (possible in Creative).

The same works for Nether portals:

If you are not confortable with commands, build your own! You will need 12 endportal blocks and 12 ender eyes. 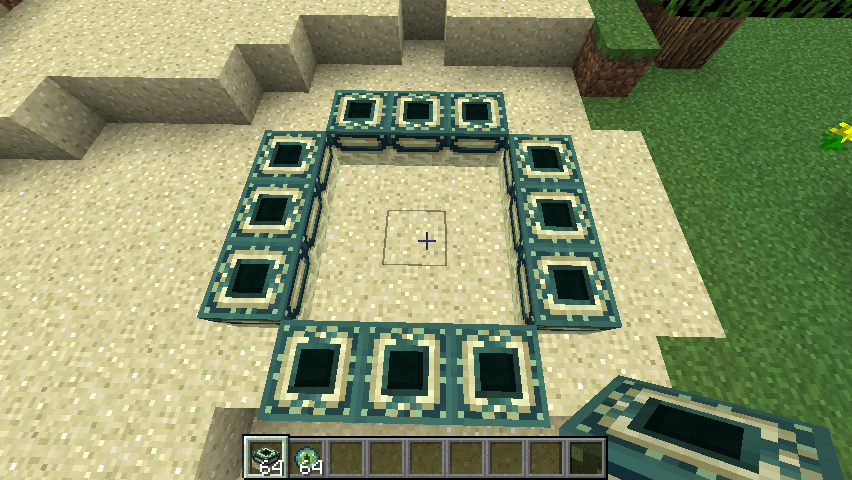 Now, its IMPORTANT you step in the center (or float) and place the ender eyes, any other angle and it won't work.

You are able to create an End Portal in creative, and you may also find the one that spawns naturally by throwing Eyes of Ender.

-1
How to create a portal to the End in Creative? (Mine craft)

13
What really happens when you enter a portal in minecraft? (Or should I say, when you come back?)
28
How far away do portals need to be so that they don't go to the same place?
3
How do you build an End portal in the Nether?
4
Can I block creation of new Nether Portals in vanilla Minecraft?
10
Why won't the End Portal I built in creative work?
1
How to keep the spawnchunks loaded without generating the nether or end
2
Linking two portals in Minecraft
4
How do I make a player fly using the console command line?