Heres a scenario: You have a room 25x25x25 (xyz, not that it matters much) and you'd like to put spawners in it to make a fast spawn farm. You wouldn't just fill it to the brim with spawners because the spawners in the middle would have nowhere to spawn their mobs.

I know, the best way to arrange spawners vertically is to just stack them on top of each other in pillars, but here I'd like to focus on horizontally. Minecraft spawners start off spawning 4 mobs on 4 randomly chosen spots in the radius of the spawner, but if the space randomly chosen is taken that mob will not spawn, and if all 4 mobs have nowhere to spawn it will try every tick to spawn just one mob anywhere it can around itself until it's successful. The wiki says that it's also a higher chance for mobs to spawn closer to the spawner, but the spawn chance percentages per ring around the spawner (x,z) are not given. So if the inside rings are "worth" more than the outside rings the inside rings should have less spawners in them. How close can two spawners get before the space the second spawner occupies is worth more than its spawn rate?

Taking all of this into account, and not taking into account resources or player radius to the spawners or too many mobs in the chunk, what is the optimal placement of spawners for the best use of space and fastest spawn rates?

Update: Keep posting answers, there's yet to be a mathematically based answer so keep thinkin' boys.

I ran some tests to try to get you closer to an answer. I built an area, 25 x 25 with a drop so zombies would spawn, fall, and be killed. I filled a horizontal plane with spawners all at the same distance from each other. I put the game mode on easy for 1 minute exactly. Then checked the drop count of rotten flesh. I ran the test multiple times to verify similar results each time. I then changed the distance of the spawners and ran the test again. I did this with spawner gap distance of 1, 2, 3, and 4.

I placed spawners 3rd down from the ceiling to allow spawns at level above spawners. I placed on block top of each spawner to prevent mobs from spawning on top of spawner. 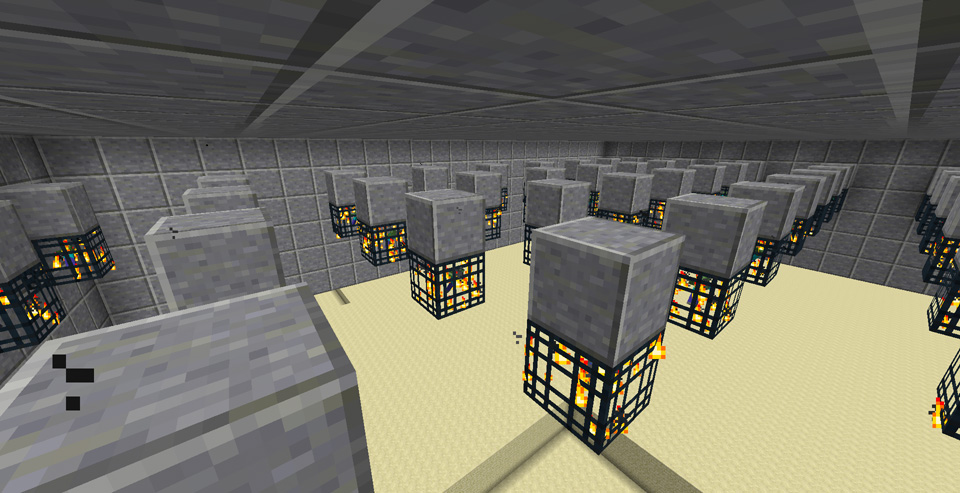 Here is a picture of the different distances on spawners: 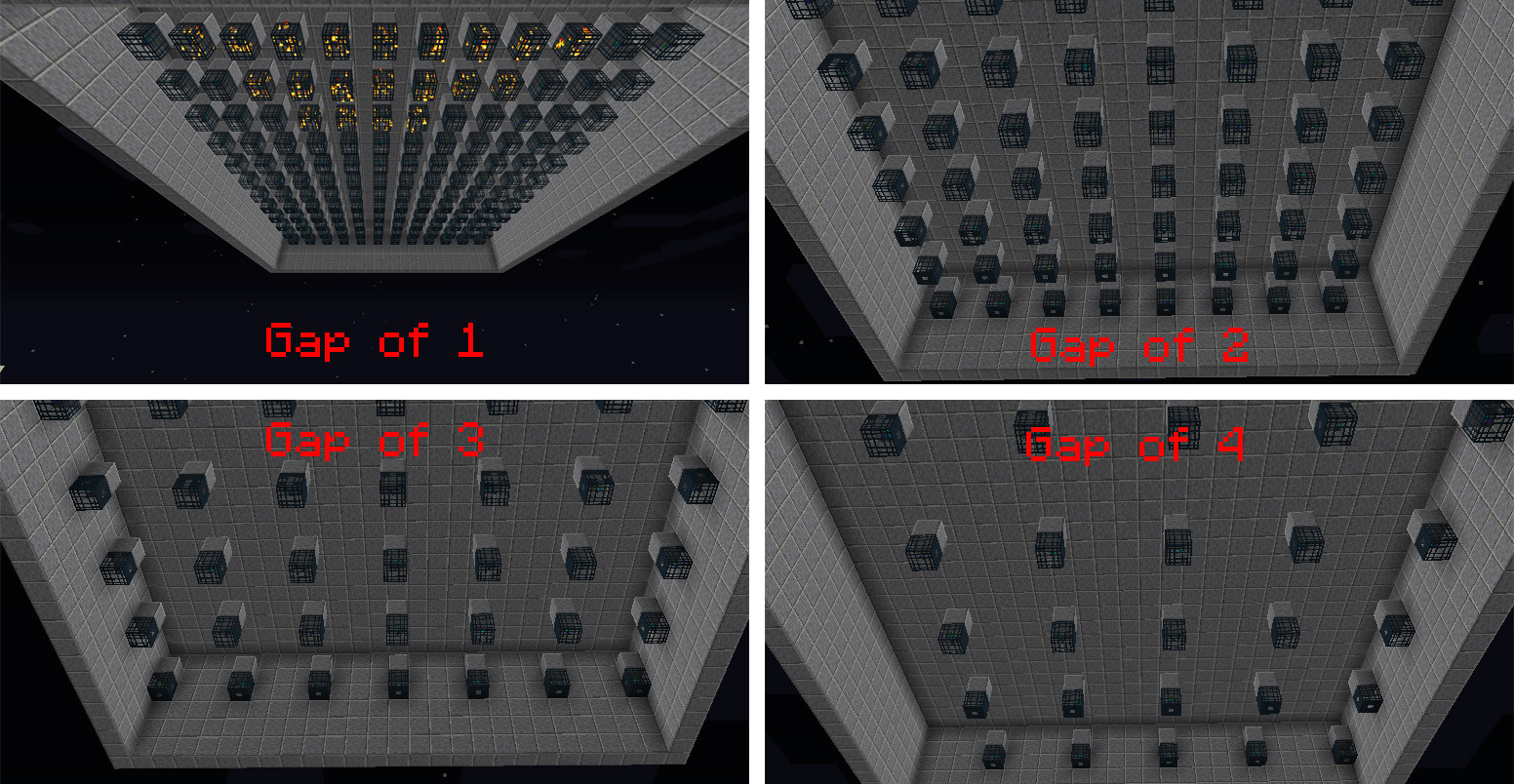 The averages of the results:

Edit: I kept playing with this. I made the same test with a gap of one but I put a second spawner under each spawner. 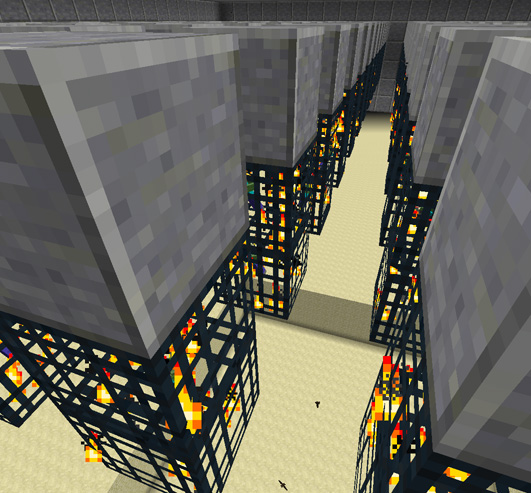 The one minute test yielded an average of 936. A large increase.

I was directly in the middle, right under the spawners, in order to activate as many as possible when the tests were run.

Here is a picture of the last build raining zombies (I am using freecam to get this):

You need exactly one spawner.

You just need to adjust his NBT data so it is...better.

SpawnCount:100 makes to spawn 100 zombies at once, randomly around the spawn range. Why not. Want more? Put there bigger number. Also you may want to make sure they have space eligible for spawning, but after all, you have (25*25)-1 blocks to fullfill that.

MaxNearbyEntities:100 is the number that is the maximum count of actually spawned zombies around the spawner. If you won't move them away, no more will spawn.

Delays: you make it lower, it spawns faster, basically. It is in 1/20ths of second, ticks. If you put maxdelay on 20, mindelay to 10, the spawning process will randomly occur once to twice a second! Player range: this command has it at 30, so this spawner will be working with player in range of 30 instead of default 16.

WARNING: putting there high numbers can severely lag your server! If all those mobs will land on one spot, and touch each other with hitboxes, you may end with dead TPS server. It will want to count the hitbox interactions for each mob with each other on same spot, leading into exponential problem! Make a safety switch or auto-killer if things go wrong! (for example gamerule against entity cramming in new versions)

7
Spawning mobs: does it matter if I stand still or not?
6
What effect does framerate have on mob spawning?
2
Best way to deal with slightly non-connecting mob spawners
10
Overworld zombie pigmen spawns
6
Has Minecraft mob spawning been changed to reduce effectiveness of vanilla mob farms?
7
What are the odds of a librarian villager selling Mending books at tier 1?
1
How can I make a spawner that summons Items?
3
Custom Minecraft 1.8 spawners