How do I sprint in Destiny 2 while using Remote Play?

Since discovering the Remote Play function on my Vita recently (and discovering that my Vita was not, in fact, broken), I've been using it to play most of my games away from home. However, sometimes the bindings are a little unintuitive, as the Vita has less buttons than the DualShock 4 controller.

For instance, in many cases, to cover for the L1, L3, R1, and R3 buttons, the Vita allows the top left and right and bottom left and right corners of the touch screen or touch pad to act as these buttons. In Destiny 2, the rear touchpad responds to these touches, but the functions bound to these buttons on the DualShock 4 do not happen. That is, despite the screen notifying me that I touched these locations on the touchpad (it does this when a game uses these motions), nothing happens.

After a while of trial and error, I discovered that touching the right side of the touch screen on the front counted as R1 (melee), so simultaneously tapping the left and right sides activated my Super. I hadn't tried this at first, because the main area of the touch screen also works as the touch pad on the DS4 controller. This was a wonderful discovery, however, I'm still at a loss as to what gesture functions as my L3 and R3 buttons. What part of the front touch screen or rear touch pad act as these buttons, so that I can sprint? 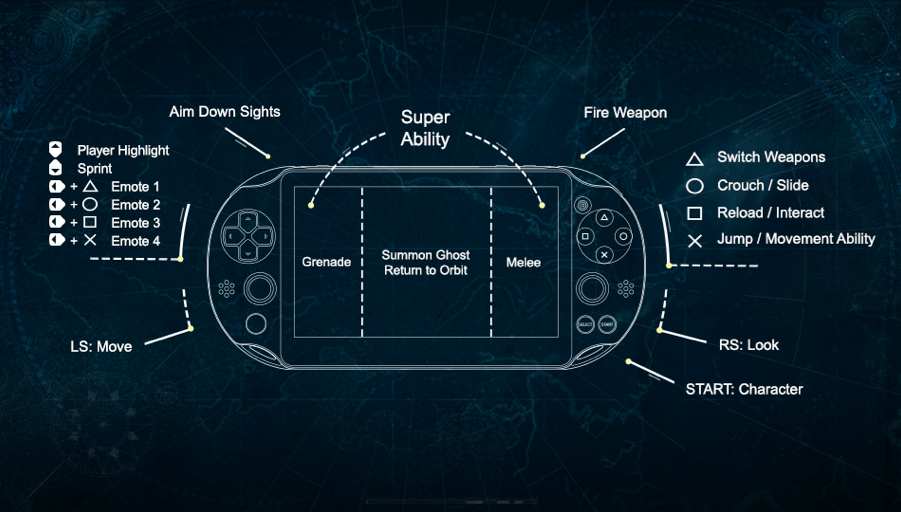 Not the answer you're looking for? Browse other questions tagged ps-vita destiny-2 ps4-remote-play or ask your own question.

1
Can I turn off my PS4 with my Vita using Remote Play?
0
How to join Destiny 2 text chat while in crucible or other online modes?
4
How do you show visual countdowns for Destiny 2 abilities?
3
Is it possible to play second hand Destiny 2 online?
15
How does Destiny 2 save?
4
Can I play Destiny 2 without PS Plus?
7
Can I switch to third-person while not in 'town' in Destiny 2?