How many blocks wide in one direction can chorus plants get to be?

I'm making a chorus farm but don't know how much space to give each plant. I'm adding walls and a ceiling, and I've read they have grow as tall as 22 blocks from the Minecraft wiki, but what about width?

I would recommend 4 block gap in between.

Growth is all probability. Plants attempt to grow upwards. We like upwards as it does not age the flower. If that upward attempt fails they sometimes attempt to grow horizontally which also has the benefit possibly forking. In order to do that, they need air on all sides of the target blocks and the block below. Too close and you limit those possible splits. Those splits give us more probability of more upward plant as well as more forks.

If the plant attempt to grow upward and horizontally fails, the plant is given the age of 5 and stops growth. Even if it was at age 0.

With a larger gap, once in a while you would have a larger plant but the probability becomes lower the larger the gap. A gap of four is a good compromise based on usual growth. Especially since some plants will be short which gives all plants around it the possibility of using the space above it.

Here is a single line with the 4 block gap. 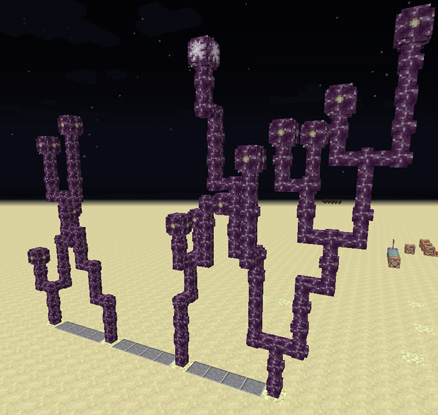 My deduction: As a plant grows horizontally it's age increases by one. I believe this includes all flowers when it splits. When it reaches age 5 it is done growing. If a plant were to grow up one and split, then grow horizontally for the remainder of the flowers lifetime, it would reach a width of 11 blocks.

Eleven blocks is the maximum width.

If you look at the right plant in the second image, it grew to a width of 8. It did pretty good.

This chorus plant was made in creative but shows maximum width: 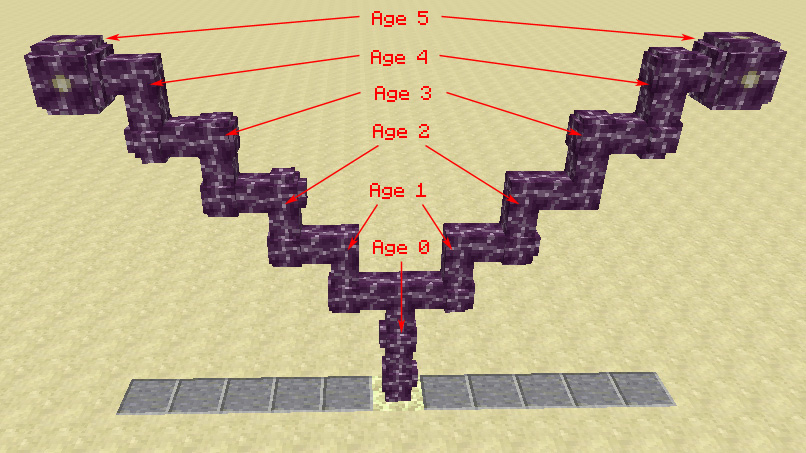 Correct me if this last portion is incorrect. This is based on the growth algorithm in the wiki.

I don't believe there is a limit, although, (as @Kyle Rone suggested), the width may depend on the height. I've noticed (while farming, and in the end forests) that Chorus plants are designed to be able to grow on endstone any direction, at least one block away, from other plants of their type. This means that for each block in height, the plant's code seems to decide randomly to either grow higher, or grow wider each time. I do not know this for sure, but this is what it seems like.

12
Is it possible to grow cactus?
6
How can I get to the Sky dimension?
40
How fat is 'Steve'?
3
How to farm spruce trees indoors?
3
How can I create a copy of an entity using command blocks?
7
How can I get more children to grow up?
6
What is the exact maximum height oak trees can grow?
1
How does the Power enchantment on bows work?
2
How far do I need to be from the Iron Golem farm for it to work?