How does splitter sorting work?

In comments to another question, user Marc C posted a very interesting contraption: 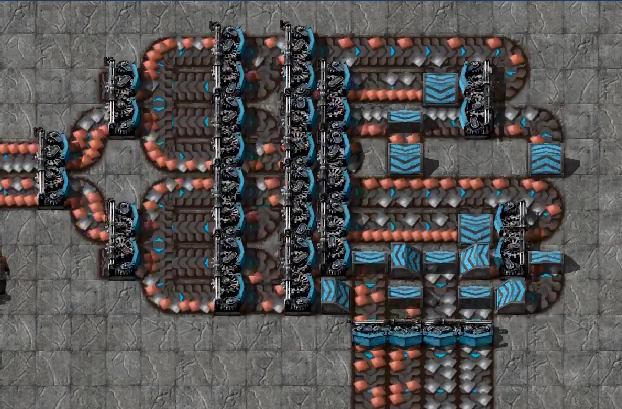 Splitters have an interesting property that the decision of which belt to output on is decided per type of item.

Time for an example with bad ASCII art (with * as splitters and = as belt):

Let's assume we're sorting iron and copper, his setup will make it so that both the copper and iron input is send to the outer sides of the belt.

Let's zoom in on the end:

That is, until you manually place an extra copper on the tuning point, offsetting the splitting and suddenly copper is on the inside of the output and iron is on the outside!

The complicated mess is needed to a) extract the output from the proper sides of the belt (that's what the underground belts are for, if you input to the side of one only one side of the belt moves) and b) make it take more input at one time.

The danger of this set up is that if it ever backfills it breaks and needs to be cleared and reset, so some circuit logic is needed to make it not break.

18
Can you control what ore a drill harvests when it's placed over multiple ores?

5
Does time elapse when the player is in a menu in single-player mode?
7
Does refactoring have a cost besides time?
4
How much energy does a solar panel produce per day?
3
Does a lab consume different potions each at the same speed?
7
Why does this steam engine fail to run?
8
What does the purple progress bar mean for electric drills?
4
How do the odds of producing Uranium-235 and Uranium-238 work?
6
How can I get Windows system scaling to work with Factorio on 0.17?
2
Open inventory hotkey doesn't work in tight spot