What is the missile silo and how do I power it?

I'm at the end in sector 7 and there's a missile silo that I can interact with but I don't know how to power it up. All the turrets have been powered up already.

Where can I find an energy core? 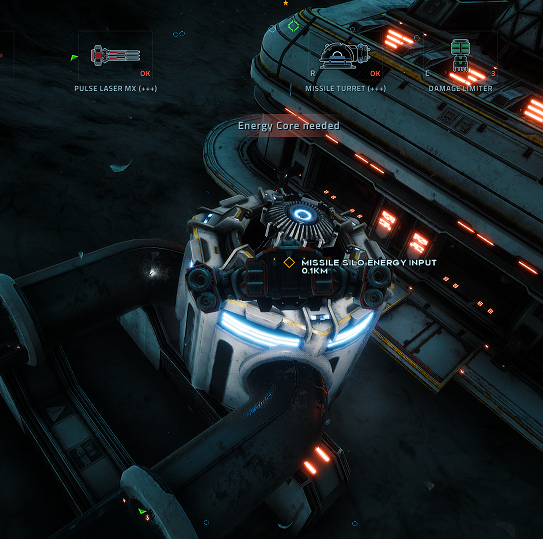 I had been thinking the same thing; what good is this missile silo, and how do I make it work?

It comes at the end of the second part, after you collect all the DNA fragments and make it back to sector seven one last time. There, Admiral Born has had it with you, and attacks you with his fleet capital ship. The only way to win is to pull energy cores from the turrets and deliver them to the missile silo. Its a bit of a game of chicken, as getting caught in the open when his particle beam is charged is instant death. So you have to get cores, hide behind mountains, and make a mad dash through enemy craft and laser fire to deliver the core to the silo. Several times.

As stated on two forum posts, on Steam community and Everspace community, you need to collect all DNA fragments, and then go to Sector 7. Something will happen (though no info on what will happen is present on those forum posts).

The whole procedure seems to be related to a fight with a warship. More details here:

DNA strings you get from killing clone of yourself. You can find 0 or several strings each runs. And they show on the sector map as DNA Helixes.

Not the answer you're looking for? Browse other questions tagged everspace .

1
I'm dying a lot at the start. How do I survive the beginning?
0
What was the darkness that killed me in zone 3 in EverSpace?
4
What is the range of the target decelerator?