Is there any benefit in taking bigger bombs if the total explosive mass is smaller?

For example on the Italian BR.20 DR you can take 4*250kg instead 12*100kg.
It is an improvement in the research tree but to me taking the big bombs seems worse than the small ones. 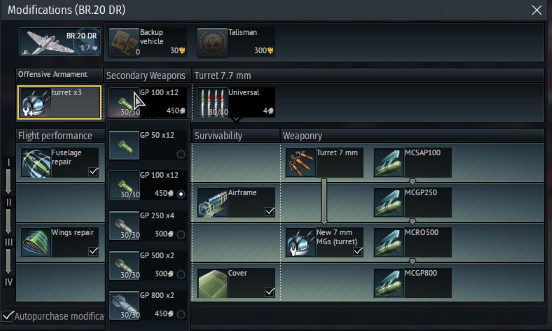 I would have less explosive mass if I want to bomb bases and it would be more difficult to bomb a long line of vehicles, so is there any benefits in taking these bigger bombs ?

This is probably more important when attacking player-controlled ground targets (i.e in Ground RB/SB rather than in Air), but: bigger bombs have bigger AoE, so you don't need to be as accurate when attacking a moving armoured target, like a heavy tank or TD. For example, you need to drop a 100kg bomb right on top of a Tiger to take it out, but a 500kg bomb can take one out when detonated some 5 meters away - useful both if you go for a low release with a delayed fuse, or drop from significant altitude. It also makes it possible to kill several lightly-armoured targets with a single bomb. And, as SGR mentioned in a comment to your question, if you're under fire it is faster (and thus safer) to drop four bombs than try to get all 12 bombs on target.

This depends on your strat for the bombing. If you know you are precise with your bombs and you feel you are able to get them off in time, take the bigger bombs. However, if you are having problems with accuracy or want to bomb vehicles as you said, I would recommend medium-small bombs. I would not use those from altitude though.

Not the answer you're looking for? Browse other questions tagged war-thunder or ask your own question.