Who and what can lay down suppressive fire?

Reading about the classes before the beta started, I had the impression that suppressive fire was a super-power for the Support class.

But since I've gotten the bonus when playing at least one other class, that's apparently not the case. Which has left me wondering why people often write about suppressive fire and the Support class as though they were connected in some way.

Any class and any weapon can lay down suppressive fire. The amount of suppression achieved depends on 3 things:

All of this coupled together makes the Support class generally the best class to purposely lay down suppressive fire, as using the bi-pod will make you accurate enough to get close proximity, your bullets are large enough to achieve quite a good suppression effect per bullet and you can fire much more than any other class to reach the suppression cap much more quickly.

With that said, generally, you won't purposely try to lay down suppressive fire much (unless you're in a really good squad who actually communicates and works as a team), you'll generally be taking a few shots at an enemy and a few will miss, causing suppression, and as long as they're at least a little bit suppressed, you'll get the suppression bonus if someone else kills them (they don't need to be very suppressed at all, just enough to cause the screen blur).

Someone on Reddit did some testing and found the actual suppression area around a target; firing bullets, a number of them (how many depends on caliber, etc) into the area in red will cause suppression.

Also an official response from one of the game designers:

Shooting at cover will suppress, if the player is close to the cover. Furthermore the suppression zone is a sphere, which is why you can suppress when hitting the cover. The bullet passing through the zone and the bullet impacting in the zone both have suppressive aspects. 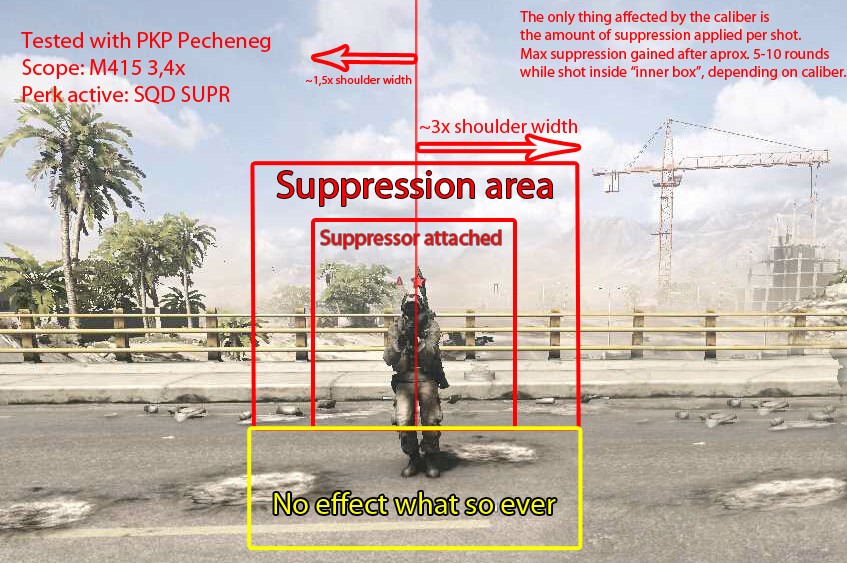 Smoke grenades can cause suppression.

If you take the suppressive perks, you will probably get suppressive kills if you are shooting the spotted person or target.

0
What determines Suppression?
7
In determining accuracy statistics, is each round of on-target suppressive fire considered a missed shot?

6
What is “Below Radar” and how does it work?
5
What is the “best practice” on taking down a helicopter with a (single) Stinger?
3
Can I change the mouse sensitivity for the X and Y axes individually?
7
What is veteran status, and how do you get it?
3
When is the bipod used and can this be controlled?
7
In determining accuracy statistics, is each round of on-target suppressive fire considered a missed shot?
0
How can I set vehicle sensitivity to work for both tanks and jeeps?
3
What do !punish and !forgive commands do on some hardcore Battlefield 3 servers?
4
What multiplayer modes are available in the DLC and what do they do?
5
In Battlefield 3 what can slowly damage my tanks?