How to control a rocket?

Historically I've been using a LOT of rockets and a LOT of fuel in order to achieve successful flights -- burning 6-8 BACC "Thumper" Solid Fuel Boosters to lift a payload of 2-4 FL-T800 Fuel Tanks so I can get into a stable orbit, then I burn an entire FL-T800 Fuel Tank just to do a flyby of the moon.

This is a horribly expensive, heavy, and inefficient way to just do a flyby, and it has made getting into orbit around the moon almost impossible. It's also extremely risky on the return trip to Kerbin since I usually can't afford the additional rocket for a controlled descent and instead rely on heat shields and prayer to make it back into the atmosphere, losing out on hours of work when I revert my flight upon catastrophic failure.

To this end, I've been trying to practice gravity turning and burning less fuel in the lower atmosphere to reduce drag forces so that I can get into a stable orbit around Kerbin with far less effort -- but things chronically go wrong. I've read about 20 tutorials on KSP rocket design and orbital mechanics and even tried following the step-by-step guide to get into orbit but it never works for me.

There are three main ways that things fail horribly for me:

Despite following the guides and tutorials precisely and picking my parts according to the specifications, it seems like my rockets are somehow less powerful than theirs. For instance, it says to hold a steady 300 m/s until 10km, then go full-throttle until you run out of fuel. I run out of fuel before I reach 10km.

The "how to get into orbit" guide suggests tilting the rocket 10 degrees east once you reach 100 m/s, performing a steady gravity turn. If I so much as look at the D key on my keyboard during a launch, the rocket spins violently out of control and goes careening into a mountain.

I feel like there's some simple trick I'm missing. Some reason things go so right for everyone else and so wrong for me. What's the magical secret to keeping a rocket under control while in the atmosphere?

For the purpose of this question, I'm trying to control the following rocket: 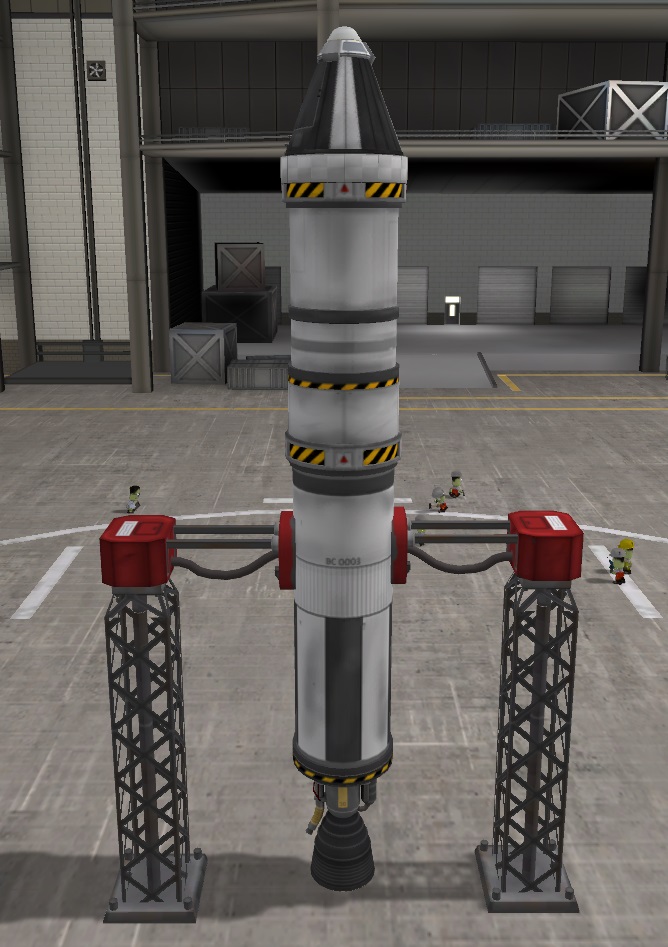 The details of its construction and staging are here:

I built this rocket exactly according to that tutorial - every piece matches exactly. I didn't swap out for cheaper engines or anything. 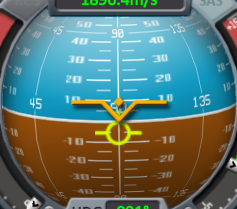 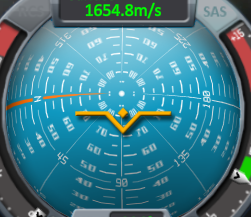 The second one is what is meant. Doing that should reduce your first stage's altitude by less than 10%.

For the control problems, as the other answers pointed out, the lack of fins is an issue (the wiki was probably written before the more realistic aerodynamic model was added, when fighting the atmosphere was much easier). Take a look at the center of mass and center of lift of the rocket (the circled buttons turn the markers on and off): 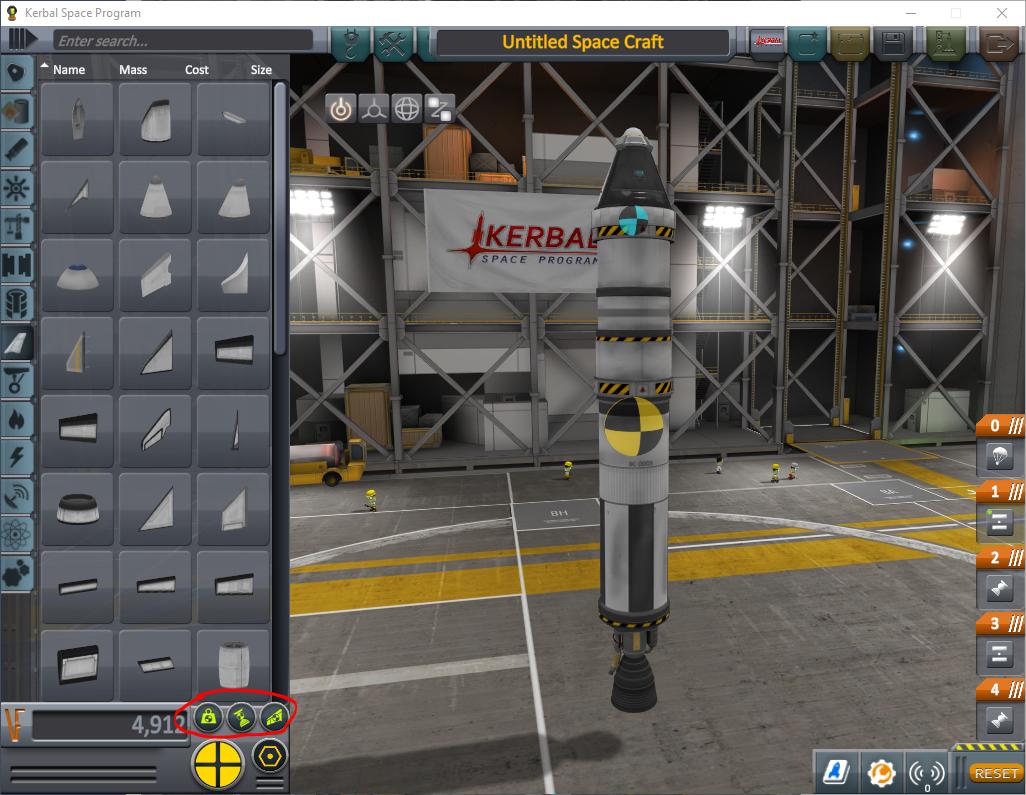 This is the key to controlling a rocket in the atmosphere (as well as building a stable plane). The CoL marker (blue) is way above the CoM marker (yellow). This means the rocket is unstable and will want to flip over. If you add some fins to the bottom, you get this: 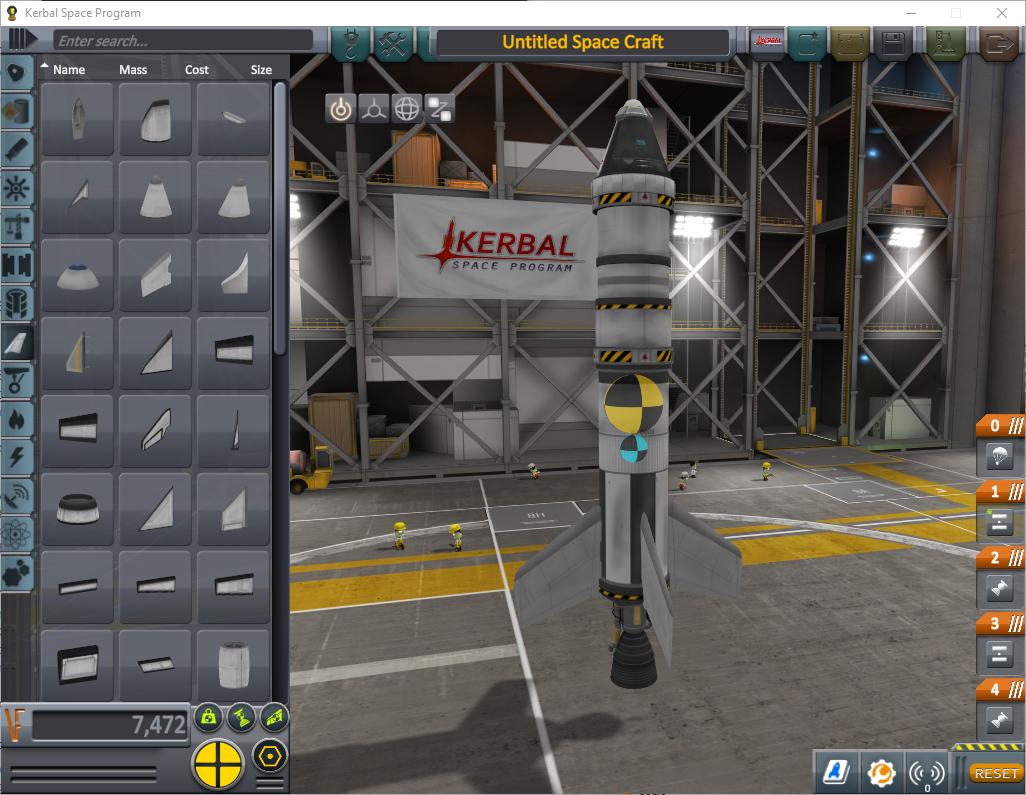 The CoL is below the CoM, which means that the rocket will always want to point in the direction it is flying (towards the prograde marker).

Here are short video comparisons of how the two rockets fly:

For the no fin version, I leave SAS disabled and simply let it go. As it speeds up, it flips over. You can fight this with more reaction wheels and gimballed engines, but it is fundamentally unstable and very difficult.

The finned version not only doesn't flip, but when I try to yaw it (which you can see from the yaw indicator in the lower left and the fins rotating), it automatically tries to center itself when I let the key go. As the rocket gets faster and the aerodynamic forces increase, yawing it becomes harder and harder.

Note that the second stage is also unstable: 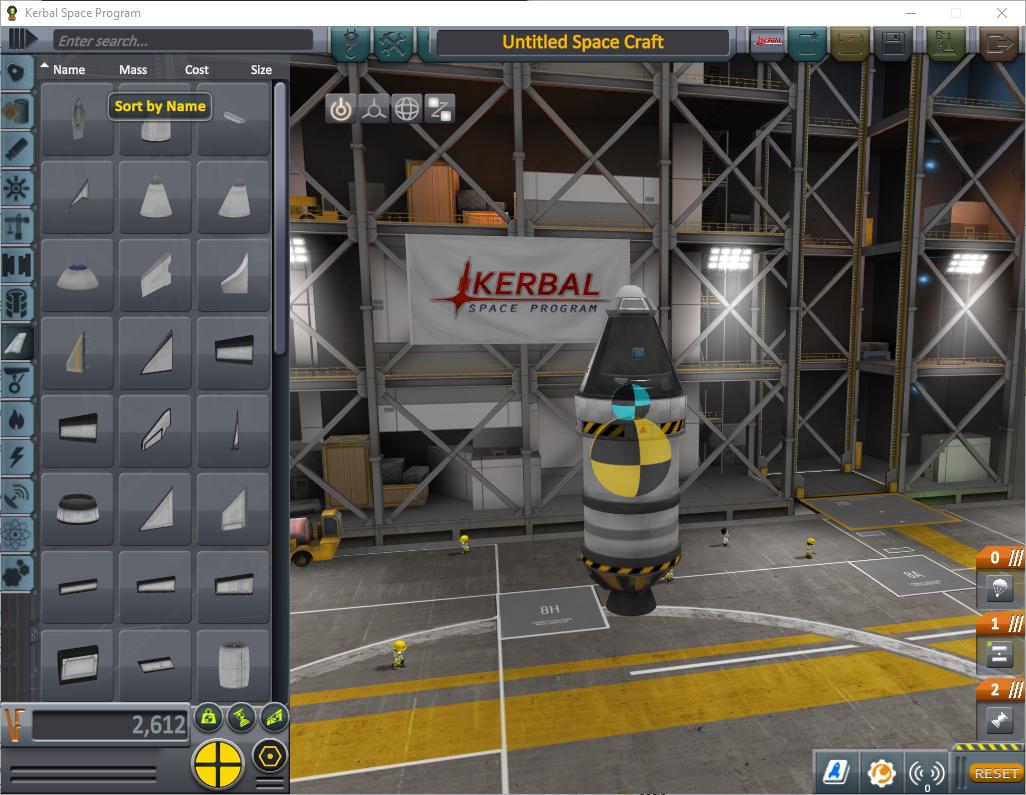 But it doesn't matter because it shouldn't separate until the rocket is out of most of the atmosphere.

In addition, here is a video of me getting the finned rocket into orbit.

I follow pretty much the same procedure as the wiki page:

I'm flying sloppily but I still have enough fuel to deorbit.

Put some tail fins on that rocket.

It looks like your rocket is probably aerodynamically unstable. What that means is that if you tip it over even slightly, the airflow coming from the side will make it tip over even more until it tumbles over entirely.

(This works in real life, too. If you look at, say, an arrow or a dart, you'll notice that they have fins at the back and a heavy tip at the front, which helps them fly straight. If you try to throw a dart backwards, with the fins at the front and the weight at the back, you'll find that it'll tumble and flip over.)

Adding tail fins to your rocket will fix that, for two reasons. First, they'll add drag to the tail end of your rocket, moving the center of lift backwards. And also, as soon as your rocket starts tilting over, the airflow hitting the fins from the side will generate active lift, pushing the tail back towards the line of motion.

For a small rocket like yours, I'd expect three or four basic fins, symmetrically placed around the bottom end of the first stage tank, should be enough. They won't provide any active steering control, though, so you may want to put a swivel engine on that first stage. For larger rockets, bigger fins with active control surfaces, such as the AV-R8 or the Delta-Deluxe winglet, may be preferable.

Ps. Tip: if your rocket is slightly unstable, setting SAS to "hold prograde" mode after starting the gravity turn will help keep it stable. It will even automatically switch from "surface prograde" (i.e. pointing directly into the airflow) to "orbit prograde" (i.e. the most efficient direction to thrust if you want to raise your orbit) when the atmosphere gets thin enough.

*) Unlike the center of mass, which is a well defined real-life physics concept, the "center of lift" in KSP (which might be more accurately called the center of pressure) is a more artificial concept, since it ignores the fact that (even in KSP's simplified aerodynamics model) the actual lift and drag forces acting on a part depend on its orientation with respect to the direction of the airflow. Thus, you cannot really define a single "center of lift" for a vehicle without first specifying which way it's moving and how fast. Still, the CoL shown by KSP in the vehicle assembly building is certainly a useful approximation for guesstimating the stability of simple vehicles.

Addendum: While symptoms #2 and #3 in your question definitely suggest that your rocket is aerodynamically unstable, there must be something else wrong with it (and/or the way you're flying it) as well. The reason I say that is because I just tried building that exact same rocket and launching it a couple of times according to the instructions, and I had no stability issues whatsoever, fins or no fins.

I even tried flying with no SAS and keeping my hands off the WASD keys after starting the gravity turn, and the rocket still did a perfectly nice and stable gravity turn even without fins. Here's a recording:

FWIW, here's the .craft file for the rocket shown on the video. You should able to drop that into your save folder and try flying it yourself.

(BTW, with fins on, I'd really recommend starting the gravity turn earlier, since at 100 m/s the rocket becomes really hard to turn with just the capsule reaction wheels for control. Also, fins or no fins, the suggested 10° initial tilt gives a pretty steep ascent. It turns out you can save some fuel by going shallower — even quite a lot shallower, although the atmospheric heating effects can get kinda scary looking when you're going sideways under 30 km at basically orbital velocity.)

It sounds like you're doing everything correctly, and this should not be happening. The rocket should be quite stable. That said:

In kerbal aerodynamics, it is quite important how parts are attached. There are two ways: attaching them by the green nodes, and placing them somewhere else. Of all the (visible) parts in your rocket, only the fuel tanks can be attached the second way, so probably try taking them off and then placing them back on while holding Alt - Alt disables radial attachment, making sure it goes on the right way. Or you can play it safe and do it with all the parts.

Additionally, make sure you haven't lost a fin somewhere inside the rocket - open the engineer's report (a wrench within a gear button at the bottom-right in the VAB), and check how many parts you have. With the two launch clamps you should have 11. If you have more, zoom in so you see inside your rocket, hunt them down, and tear the things out.

Granted, these things are not very likely, but they would cause aerodynamic weirdness with similar effects.

In a comment you mentioned you have the game since alpha. With the many patches applied since then, something could have gone wrong. I've never had aerodynamic weirdness, but crashing has happened.

If you're on steam, verifying files generally fixes this, and is relatively painless - go to your library, right click Kerbal Space Program, then properties, local files at the top, and verify integrity of game files.

If you're not on steam, deleting the game and reinstalling is probably your best bet.

Also, make sure this also happens in a new save, it might be (but, again, unlikely) due to using an old save file.

One thing that I try to do in the early stages of the game (especially career mode when your part count at launch-time is limited), is to favor use of the "Swivel" engine vs. the "Reliant" engine. I can see that you're using the Reliant in your image. In fact, the Reliant engine has pretty much zero thrust vectoring, which may be your main problem.

Note that they do look similar: 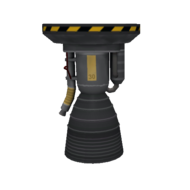 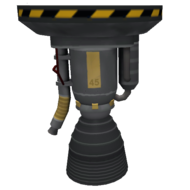 For more details on both, check out the "Engines" section of the Kerbal Wiki Parts page.

4
When should I start a trans-munar or trans-minmus injection burn?
19
What are the key design principles when building a space plane?
6
How to control the Rocket Powered VTOL?
4
Why has my Command Module's orbit not decayed?
6
What role does terminal velocity play in a rocket launch?
1
Can't control small probe launch
5
Mounting a time-limited rescue mission for kerbal inbound to Kerbin
4
When visiting an extraterrestrial moon, is it typically most efficient to fly straight into the moon's orbit then do a capture burn?
4
Why do I lose control of my ship near the Mun?
56
My large rocket is still flipping over