How are points calculated in Orcs Must Die?

I am playing the demo of Orcs Must Die! and trying to understand how points are calculated and how to increase the points I get when I finish a mission.

Just to make an example, I reached about 26K points in the first mission The Hallway, but looking at the overall leaderboards plenty of players went over 40K.

In which points category should I concentrate more? 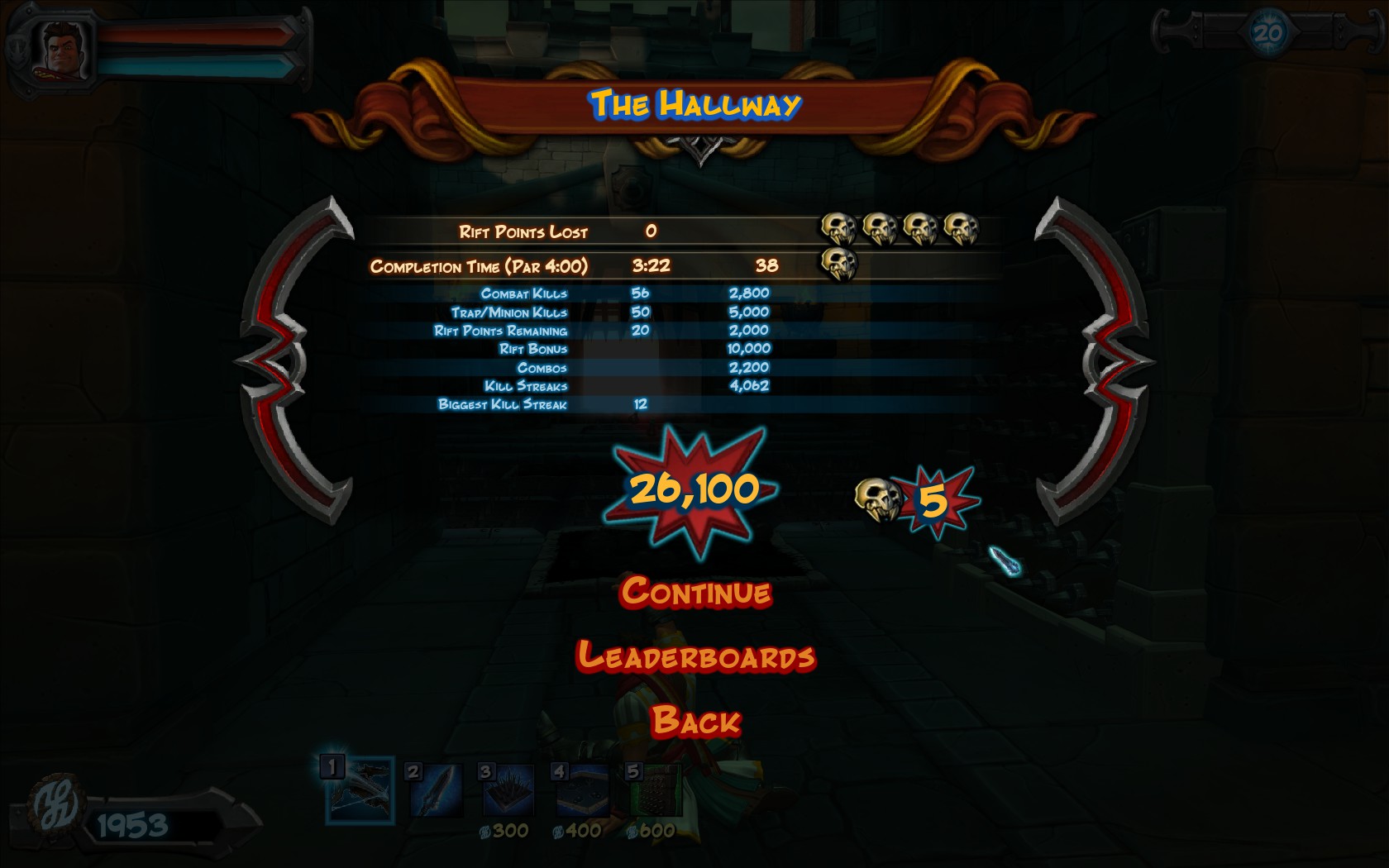 It has been published a mini-guide called "Mastering The Leaderboards" on devs blog.

In an effort to help those high-score-chasing War Mages out there, I sat down with one of our programmers to pull out information about exactly how your performance affects your leaderboard score in Orcs Must Die! Here's a look at exactly how many points you get for your various murder methods in the game. Here's a handy graph of how everything you do in the game affects your final score:

In addition once you get to Nightmare, the points for Combat and Trap/Guardian kills double.

Focus on combos. If you start lining up awesome combos (tar trap + clockwork mace), you'll rack up tons of combos and this will naturally lead to lots of kill streaks around 10x. These add up. On maps where the above combo was favorable, I've gotten near the top 1,000 on the leaderboard. Each level will have different ideal combos, so you'll have to experiment to really optimize your score.

The folks above are obviously accurate with the scores. A good strategy is to master the Middle card (1st = trap /minion kills earn 66% coin / 2cnd = Health for your minions / 3rd = archers with flaming arrows). You'll have to work out the money and when you can put coin into those options, since most levels don't give you a lot of coin to start off with.

I usually put 500 coin in the traps / minion kills = 66% coin bonus. That way no matter what, as long as I lay down some traps / minions, I'm banking extra coin (the Spell Card has the same type of coin boost, but it'll cost roughly 2400 coin just to get it).

Tar pit with swinging ball is a good setup when you can. If you throw your lightning cloud over the traps, it boosts your combos, though you will get several combat kills - trick is to just get the front of the cloud over the trap, then you only have a bit of the lighting coming out, but you still rake in the combos.

On maps that don't have low ceilings for the swinging ball, or even ones that do, and you've got a decent amount of coin, try combos like lining up fire pit traps in front, then spikes behind those (throw a wall arrow trap on the same row as the spikes). Orcs hit the fire and catch a DoT (damage over time), hit the spikes and combo - stack that as much as you want.

Once you have your archers with flaming arrows, then don't use, or get rid of the fire pit traps, and replace them all with spikes and wall traps - every time an archer hits, fire spreads to the rest, and the spikes finish off the combo - lay down a lightning cloud in just the right spot, and in situations like that, I've gotten up to 8x combos before.

On bigger maps (like the tower) where you have a good amount of waves, mix and match the traps in a large, common area (tar pits, fire pits, poisoned spike pits, wall traps all around - leave out the fire pits if you have archers with flaming arrows). By the time you get half way through the first few waves it's nothing but combos and kill streaks.

Any ogres, werewolves, trolls - all the big bastards - stay with them and keep them (agro'd) - interested in you - otherwise they'll go after barricades or your minions or just run right into the riff.

Swinging spike ball is best with tar traps on low ceiling. High ceilings - use the lightning crystal and tar traps or whatever - just remember they have to reset after a few kills - you can use them on fliers if there's a place for them in the level - or use them the same way you would any other ceiling trap.

One levels with a lot of boss monsters coming at you - throw down a couple of Paladins and level up their ability (middle card again) to stun when they hit and the bosses are done.

Doing the same above stuff, on over half the levels I'm ranking 35 (most I'm under 30) or better in leaderboards, but with the exception of 3 or 4 levels, I'm within at least the top 50.

Not the answer you're looking for? Browse other questions tagged orcs-must-die or ask your own question.